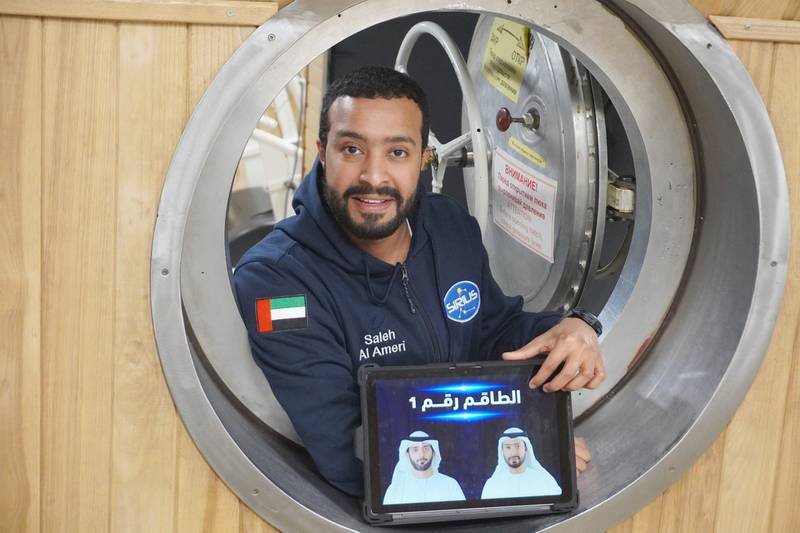 Mr Al Ameri is part of the Sirius 20/21 project that measures the psychological and physiological effect on humans living in the extreme environments that astronauts face during space travel.

An Emirati will step out into the world on July 3 after spending eight months in near isolation.

Saleh Al Ameri, 31, and his five colleagues have been conducting space travel research inside a Russian plant since November 4.

The mechanical engineer is taking part in the Sirius 20/21 project, field tests that study the psychological and physiological effects of isolation by simulating journeys into deep space, also known as analogue missions.

As more countries plan to send astronauts on missions to the Moon — and possibly Mars — these experiments are crucial in understanding human behaviour during deep space missions.

On Sunday, Mr Al Ameri will leave the NEK experimental complex in Moscow to be met by officials from the Mohammed bin Rashid Space Centre (MBRSC) and Russian space agency Roscosmos.

He will leave the habitat with his three Russian and two American colleagues.

They have had no internet or social media access throughout the experiment, while contact with family has been limited.

However, they did keep regular contact with “mission control”, outside of the complex.

“The biggest challenge for me, apart from the isolation, is the lack of information and communication with people in the outside world,” said Mr Al Ameri in a previous interview with The National.

“We don’t have internet or social media platforms here. If we want to know something, the only way is to ask the people in the mission control centre. To overcome these things, we try to keep ourselves busy.”

It is hoped the Arab world’s first analogue mission will boost the UAE’s space programme, as the country looks to send an Emirati to the Moon and advance its human research capability.

He has also “driven” a rover on the Moon’s surface to collect samples and transported them to a base using simulators and virtual reality.

He has piloted a spaceship simulator, docked it with the International Space Station and the Lunar Gateway and has flown in the orbit of the Moon and Mars.

Researchers have been observing the crew’s behaviour using cameras installed throughout the centre to assess how astronauts might fare during lengthy space travel.

In January, Mr Al Ameri gave a video tour of his room and living conditions at the complex.

His room is a small space with a single bed against one wall, a two-door cupboard and a small desk on which sit two laptops and medical equipment.

“I also hung a few things on the wall that motivate me and provide psychological support, such as the MBRSC logo and the UAE flag,” he said in a previous video.

“They push me to give me the best for the mission.”

Each participant has their own room but the plant also has a common room for socialising.

Why is UAE participating?

MBRSC is building a Dh500 million ($136.1m) Mars Science City in Dubai, which will have analogue facilities.

It is hoped it will help the UAE to gain access to such missions and participants will be invited from across the world.

Hera is a three-storey habitat that replicates isolation, confinement and the remote conditions experienced on space missions.

It has so far featured six campaigns, each of which included four or five missions lasting from one to 45 days.