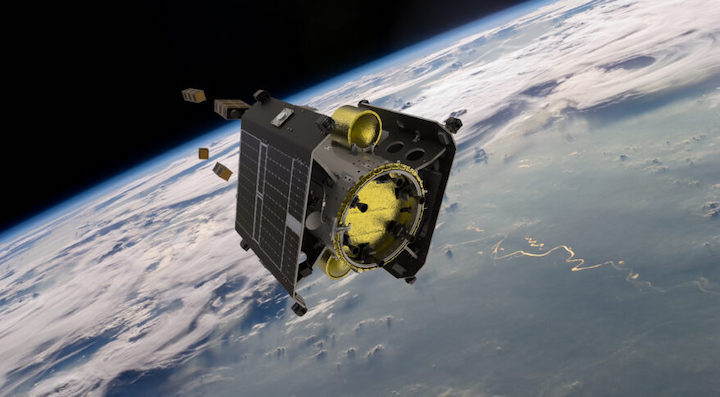 TAMPA, Fla. — Canada’s Kepler Communications said June 30 it plans to use D-Orbit’s orbital transfer vehicle for the next two satellites in its low-data-rate constellation.

The Kepler-20 and Kepler-21 satellites will be boarded on the Italian space logistics company’s ION Satellite Carrier, which has booked a flight in the first quarter of 2023 on a rocket the companies declined to disclose.

After separating from the launch vehicle, D-Orbit intends to use ION to drop Kepler’s satellites off at a sun-synchronous orbit (SSO) between 500 and 600 kilometers. Each satellite is the size of six cubesats, a standard smallsat form factor measuring 10 centimeters on each side.

ION and orbital transfer vehicles developed by other companies offer operational efficiencies for satellite operators, enabling them to save fuel by ferrying their spacecraft to custom orbits post-launch.

While D-Orbit spokesperson Elena Ceraso declined to identify the launch vehicle that will take ION to orbit, she said it is not the mission the company announced June 22 with German startup Isar Aerospace.

Kepler currently operates 19 satellites to provide connectivity to devices out of range of terrestrial networks.

As with two of the four Kepler satellites that launched Jan. 13 on a SpaceX Falcon 9 rideshare mission, he said Kepler-20 and Kepler-21 will have an S-band terminal to test inter-satellite links.

Kepler plans to use inter-satellite links to tap into a data-relay constellation of larger satellites it aims to start deploying early next year.

In October 2020, Kepler announced an agreement to use Momentus Space’s Vigoride orbital transfer vehicle to deploy two satellites in 2021.

However, Momentus Space ran into technical and regulatory delays that ultimately saw the company launch its first Vigoride mission May 25 on a Falcon 9, without Kepler onboard.

D-Orbit announced its own SPAC merger plan in January to become a public company in the third quarter of 2022.