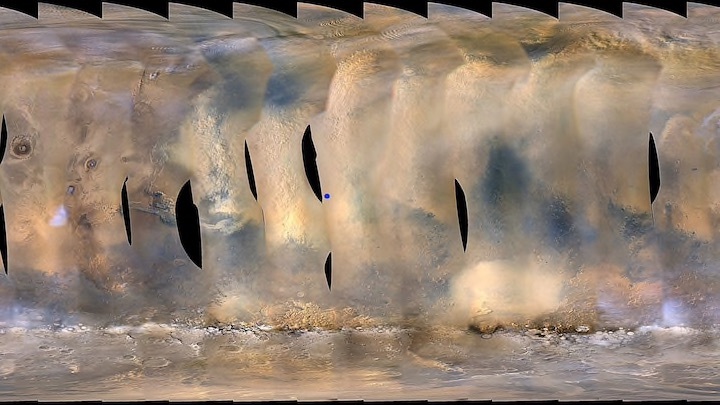 This global map of Mars shows a growing dust storm as of June 6, 2018. The map was produced by the Mars Color Imager (MARCI) camera on NASA's Mars Reconnaissance Orbiter spacecraft. The blue dot indicates the approximate location of Opportunity. Image Credit: NASA/JPL-Caltech/MSSS

Science operations for NASA's Opportunity rover have been temporarily suspended as it waits out a growing dust storm on Mars.

NASA's Mars Reconnaissance Orbiter first detected the storm on Friday, June 1. As soon as the orbiter team saw how close the storm was to Opportunity, they notified the rover's team to begin preparing contingency plans.

In a matter of days, the storm had ballooned. It now spans more than 7 million square miles (18 million square kilometers) -- an area greater than North America -- and includes Opportunity's current location at Perseverance Valley. More importantly, the swirling dust has raised the atmospheric opacity, or "tau," in the valley in the past few days. This is comparable to an extremely smoggy day that blots out sunlight. The rover uses solar panels to provide power and to recharge its batteries.

This isn't Opportunity's first time hunkering down in bad weather: in 2007, a much larger storm covered the planet. That led to two weeks of minimal operations, including several days with no contact from the rover to save power. The project's management prepared for the possibility that Opportunity couldn't balance low levels of power with its energy-intensive survival heaters, which protect its batteries from Mars' extreme cold. It's not unlike running a car in the winter so that the cold doesn't sap its battery charge.There is a risk to the rover if the storm persists for too long and Opportunity gets too cold while waiting for the skies to clear.

Ultimately, the storm subsided and Opportunity prevailed. The Martian cold is believed to have resulted in the loss of Spirit, Opportunity's twin in the Mars Exploration Rover mission, back in 2010. Despite this, both rovers have vastly exceeded expectations: they were only designed to last 90 days each. Opportunity is in its 15th year; the team has operated the rover for more than 50 times longer than originally planned.

Full dust storms like this one are not surprising, but are infrequent. They can crop up suddenly but last weeks, even months. During southern summer, sunlight warms dust particles, lifting them higher into the atmosphere and creating more wind. That wind kicks up yet more dust, creating a feedback loop that NASA scientists still seek to understand.