Scientists in Scotland will work on the world’s first ever Gravitational Wave Space Observatory, which will study ripples in space and time, thanks to an initial £1.7 million of funding from the UK Space Agency. 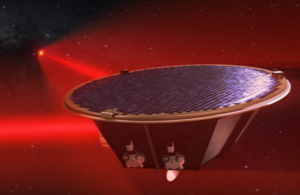 The UK, through the work of the University of Glasgow’s Institute for Gravitational Research and the Science and Technology Facilities Council’s UK Astronomy Technology Centre (UK ATC) in Edinburgh, will develop the optical benches for the European Space Agency’s LISA mission (Laser Interferometer Space Antenna). These optical benches are at the core of the laser interferometry measurement system, the key technology needed to detect gravitational waves.

The space observatory, planned for launch in the 2030s, will allow scientists to study these mysterious waves, improving our knowledge of the beginning, evolution and structure of the Universe. It will build on the success the LISA Pathfinder mission, which in 2016 successfully demonstrated the technology needed for LISA. It will also build on work already taking place here on Earth where UK researchers, including from STFC and the University of Glasgow, are contributing to the ongoing LIGO project that made the first detection of gravitational waves in 2015.

“The University of Glasgow has a worldwide reputation for gravitational waves research, with the pioneering work of Professor Ron Drever in the 1960s leading to the Nobel Prize-winning detection of the waves in 2015. This new funding ensures this legacy continues with the LISA mission, alongside crucial technology innovation from the UK ATC in Edinburgh. Scotland is yet again at the heart of UK space activity.”

The detection of gravitational waves in 2015 marked the start of a new era in astronomy.  First predicted by Albert Einstein a century ago, these tiny ripples in the fabric of space-time are generated by cataclysmic events like the merger of black holes or neutron stars and offer an entirely new way to study the Universe.

Dr Ewan Fitzsimons, who was part of the team at the University of Glasgow which developed the LISA Pathfinder optical bench and is now leading the LISA team at STFC’s UK ATC, said:

“It’s a very interesting time right now – the amazing science that LIGO has enabled is showing us the potential of gravitational wave astronomy to revolutionise our understanding of the Universe. In addition, the success of the LISA Pathfinder mission, and now the commencement of work on LISA with UK participation has been excellent news.

“This UK Space Agency investment will ensure that UK scientists are centrally involved in developing and utilising one of the most exciting and significant astronomy projects of the next few decades.”

“The funding announced today sets the Glasgow and UK ATC teams firmly on the road to playing a leading role in a mission that promises to provide dramatically new insights into the nature and evolution of the Universe.

“After working very hard for over 15 years to bring LISA Pathfinder to such a successful conclusion, we are very happy indeed to be so strongly supported to take the crucial next step towards LISA. This commitment from the UK Space Agency will ensure that UK technology will lie at the heart of the most revolutionary astronomy mission of the next 20 years.”

Gravitational waves can be studied from space, away from ground-based ‘noise’ and measured over vast distances. LISA will be able to observe new sources invisible to the ground based gravitational wave observatories like LIGO. The LISA mission will study these gravitational waves using three spacecraft flying in a triangular configuration, separated from each other by a distance of 2.5 million km. At the heart of each spacecraft will be an interferometer.

These interferometers fire laser beams between each satellite, using them to measure tiny fluctuations in the distance between the spacecraft, which arises when a gravitational wave passes by.  Although the waves are generated by massive, violent events, they are miniscule and the interferometers must measure these tiny squeezes and stretches of the light beams to a few trillionths of a metre.

To support this the optical components of the interferometer must be arranged on an innovative optical bench that is thermally and mechanically isolated from any other effects apart from gravitational waves.

The team at the University of Glasgow designed and built the optical bench for LISA Pathfinder with funding from the UK Space Agency and STFC, supported in the early development phase by STFC’s RAL Space.  The LISA Pathfinder mission, which launched in 2015 and ended in 2017, successfully showed that two test masses at the heart of the spacecraft could be put into a state of virtual free fall in space, under the influence of gravity alone and unperturbed by other external forces, with a precision more than five times better than originally required. The Glasgow team will build on this world-leading experience to develop the optical benches for LISA.

LISA Pathfinder only used one optical bench, which the Glasgow team built by hand, while LISA will be more complex and on a larger scale, requiring up to 12 benches. STFC’s UK Astronomy Technology Centre will partner with the University of Glasgow to develop the robotic ultra-precision technology required and lead the overall design and build of the LISA optical benches. This technology will be developed specifically for LISA, but the work of the UK ATC facility in this area is expected to be of considerable interest to UK optics and photonics companies once the robotic technology is proved.

The first optical bench is due to be delivered to ESA around 2030.