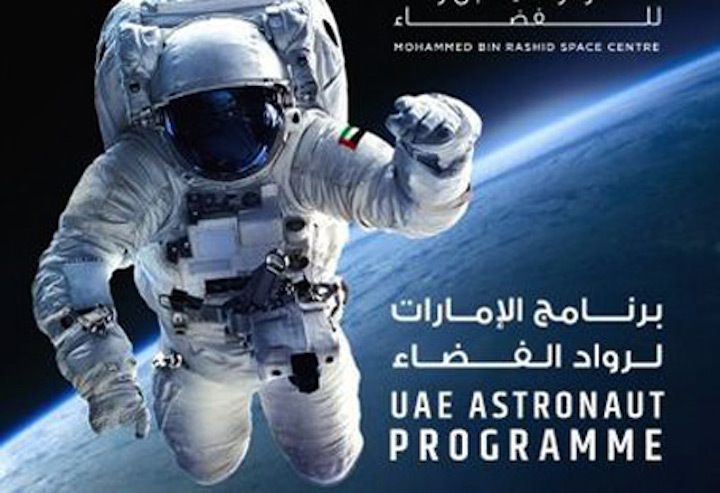 The Mohammed Bin Rashid Space Centre announced that 95 out of the 4,022 applicants have been shortlisted for the UAE Astronaut Programme, part of the UAE National Space Programme. It aims to train and prepare a team of Emiratis to be sent to space for various scientific missions. The programme was announced by His Highness Sheikh Mohammed bin Rashid Al Maktoum, Vice President and Prime Minister of the UAE and Ruler of Dubai, and His Highness Sheikh Mohammed bin Zayed Al Nahyan, Crown Prince of Abu Dhabi and Deputy Supreme Commander of the UAE Armed Forces, in April 2017.

The shortlisted applicants are 75 males and 20 females of ages between 23 to 48 years, from across the UAE. The list includes 64 candidates under the age of 35 and 31 candidates over 35 years of age. They hail from diversified educational and vocational backgrounds including civil aviation, air force, medicine, STEM and education.

Hamad Obaid Al Mansoori, Chairman of the Mohammed Bin Rashid Space Centre, said: "The UAE is moving rapidly in space science and research due to the unlimited support of our wise leadership.

We are delighted by the volume of entries from a highly qualified caliber of Emiratis. This confirms the ambitions of the UAE nationals who are dedicated to follow the country’s approach to explore space and support the vision of our wise leadership to prepare national cadres to enrich scientific progress and serve humanity through making further achievements in space exploration. This contributes to achieving the ambitious aspirations of reaching a national economy based on knowledge, innovation and creativity, in addition to enhancing the UAE’s competitiveness and leadership as a global hub for space science."

"The qualified candidates represent the future of the UAE and reflect its generations’ aspirations to shape a future that tells the story of the country’s glorious legacy. In this race to the space, they reaffirm our leadership’s plans for the youth since the formation of the union by our great leaders and until this day. With this motivating spirit we move forward together to achieving the UAE Vision 2021 and the UAE Centennial 2071, confident that the UAE astronauts will be our ambassadors for a bright future at times of the Fourth Industrial Revolution," he added.

Al Mansoori highlighted that the UAE Astronaut Programme is the first astronaut programme in the Arab world aimed towards developing skilled and capable Emirati astronaut corps and sending them out to carry out scientific missions. They will also serve as ambassadors for the UAE in space exploration, and promote scientific culture, passion for exploration, and innovation among new generations. The objectives of this programme are aligned with the Mars 2117 strategy which sheds light on the challenges and areas of interest of human space exploration.

From his side, Yousuf Al Shaibani, Director General of the Mohammed Bin Rashid Space Centre, said, "The UAE Astronaut Programme contributes to achieving the national strategy which aims to train and prepare a future generation of space explorers according to the highest international standards. The Mohammed Bin Rashid Space Centre looks forward to having a national team of astronauts who can achieve the UAE’s ambitions in this field,"he added.

Al Shaibani noted that, during the last period, the ‘Selection Committee’ worked relentlessly to carefully review and evaluate applications according to the highest international standards. The Committee shortlisted over 200 candidates who went through psychometric test that lasted up to 6 hours and focused on a number of assessments including the applicants’ intelligence (IQ) score, emotional stability, adaptability and many more competencies. These assessments were identified as necessary for individuals working and living in the International Space Station (ISS). After the test, 95 candidates were selected to be interviewed and physically, psychologically and scientifically evaluated. The final phase will conclude this year with the selection of the top four candidates and two reservists who would pass all the previous stages. The team will be the first UAE Astronaut Corps and will join efforts with other astronauts to carry out scientific missions that will complement the research needed to prepare future space explorations, find solutions to many challenges, enrich human knowledge and the scientific community.

The finalists will undergo an intensive training programme, consisting of several stages according to the highest international standards. It will start with the basic training stage, during which candidates will learn about the objectives and plans of the programme and learn the basics of scientific disciplines, including space engineering and space science. Candidates will also have to learn Russian and train in space science and research. They will then move on to advanced and intensive training, during which participants will learn about the maintenance and management of loads, as well as a range of skills including robotics, navigation, medical aid and resource management. Upon completion of this stage, the astronaut will be eligible to participate in missions to the ISS. The first Emirati astronaut will be sent to space in the coming years, and the rest of the team will follow to ISS.

The UAE Astronaut Programme is funded by the ICT fund of the Telecommunications Regulatory Authority (TRA). Launched in 2007, this fund, which is the first of its kind in the Aab world, aims towards supporting research and development within the ICT sector in the UAE, helping it to grow into a nationally significant industry with a leading place in the world.