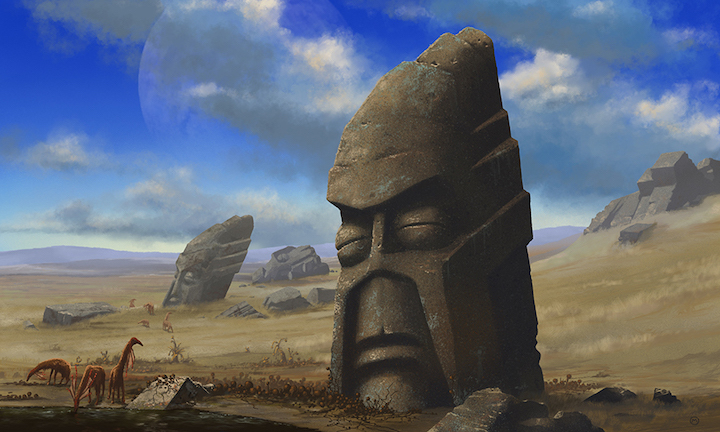 A case study of the inhabitants of Easter Island served in part as the basis for a mathematical model showing the ways a technologically advanced population and its planet might develop or collapse together. Rochester astrophysicist Adam Frank and his collaborators created their model to illustrate how civilization-planet systems co-evolve. (University of Rochester illustration / Michael Osadciw)
60

In the face of climate change, deforestation and biodiversity loss, creating a sustainable version of civilization is one of humanity’s most urgent tasks. But when confronting this immense challenge, we rarely ask what may be the most pressing question of all: How do we know if sustainability is even possible? Astronomers have inventoried a sizable share of the universe’s stars, galaxies, comets, and black holes. But are planets with sustainable civilizations also something the universe contains? Or does every civilization that may have arisen in the cosmos last only a few centuries before it falls to the climate change it triggers?

Astrophysicist Adam Frank, a professor of physics and astronomy at the University of Rochester, is part of a group of researchers who have taken the first steps to answer these questions. In a new study published in the journal Astrobiology, the group—including Frank, Jonathan Carroll-Nellenback, a senior computational scientist at Rochester, Marina Alberti of the University of Washington, and Axel Kleidon of the Max Planck Institute for Biogeochemistry—addresses these questions from an “astrobiological” perspective.

“Astrobiology is the study of life and its possibilities in a planetary context,” says Frank, who is also author of the new book Light of the Stars: Alien Worlds and the Fate of the Earth, which draws on this study. “That includes ‘exo-civilizations’ or what we usually call aliens.”

Frank and his colleagues point out that discussions about climate change rarely take place in this broader context—one that considers the probability that this is not the first time in cosmic history that a planet and its biosphere have evolved into something like what we’ve created on Earth. “If we’re not the universe’s first civilization,” Frank says, “that means there are likely to be rules for how the fate of a young civilization like our own progresses.”

In order to illustrate how civilization-planet systems co-evolve, Frank and his collaborators developed a mathematical model to show ways in which a technologically advanced population and its planet might develop together. By thinking of civilizations and planets—even alien ones—as a whole, researchers can better predict what might be required for the human project of civilization to survive. “The point is to recognize that driving climate change may be something generic,” Frank says. “The laws of physics demand that any young population, building an energy-intensive civilization like ours, is going to have feedback on its planet. Seeing climate change in this cosmic context may give us better insight into what’s happening to us now and how to deal with it.”

Using their mathematical model, the researchers found four potential scenarios that might occur in a civilization-planet system: 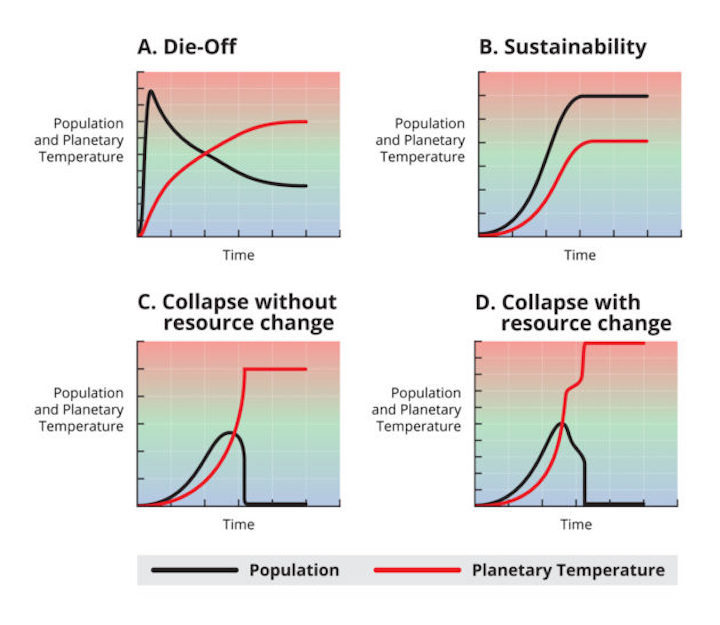 “The last scenario is the most frightening,” Frank says. “Even if you did the right thing, if you waited too long, you could still have your population collapse.”

The researchers created their models based in part on case studies of extinct civilizations, such as the inhabitants of Easter Island. People began colonizing the island between 400 and 700 AD and grew to a peak population of 10,000 sometime between 1200 and 1500 AD. By the 18th century, however, the inhabitants had depleted their resources and the population dropped drastically to about 2,000 people.

The Easter Island population die-off relates to a concept called carrying capacity, or the maximum number of species an environment can support. The earth’s response to civilization building is what climate change is really all about, Frank says. “If you go through really strong climate change, then your carrying capacity may drop, because, for example, large-scale agriculture might be strongly disrupted. Imagine if climate change caused rain to stop falling in the Midwest. We wouldn’t be able to grow food, and our population would diminish.”

Right now researchers can’t definitively predict the fate of the earth. The next steps will be to use more detailed models of the ways planets might behave when a civilization consumes energy of any form to grow. In the meantime, Frank issues a sober warning.

“If you change the earth’s climate enough, you might not be able to change it back,” he says. “Even if you backed off and started to use solar or other less impactful resources, it could be too late, because the planet has already been changing. These models show we can’t just think about a population evolving on its own. We have to think about our planets and civilizations co-evolving.”