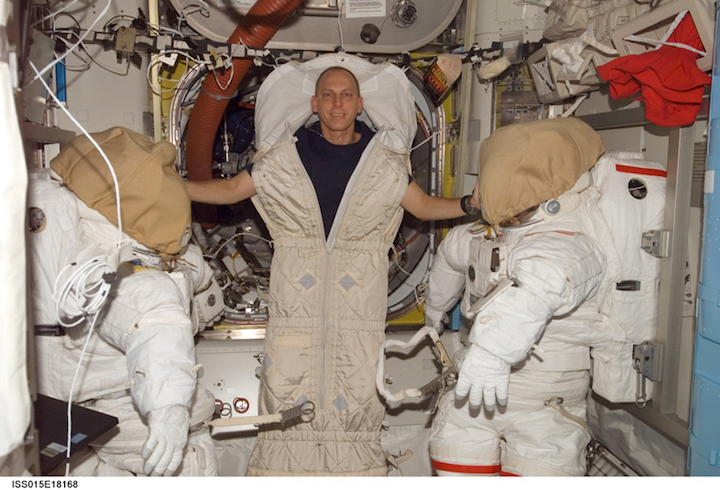 Light – both in its abundance and absence – is a crucial determinant in a person's ability to sleep. And as we learn more and more about how to create better sleeping conditions, as well as improve those found in difficult settings, sleep researchers always consider how any changes will affect the circadian rhythm. As many people know, that rhythm serves as our internal clock, which is based on exposure to light that "tells" us when we should be awake or asleep.

In a typical 24-hour day, one's circadian rhythm benefits from long stretches of daylight and darkness, which is good since long, interrupted sleep is the goal for good health and clear-headedness. But for many off-cycle people like, for example, night-shift workers, insomniacs and round-the-clock hospital physicians, there are serious challenges to getting a healthy sleeping stretch.

Now imagine, by comparison, what sleep patterns are like for astronauts, who, in a low-Earth orbit, are affected by sunrises and sunsets roughly every 90 minutes. Even through spacecraft windows, those constant light/dark switches make it very difficult to get solid, uninterrupted sleep. The average amount of sleep for astronauts, often acquired in pieces, is six hours for each 24-hour cycle. And reportedly three quarters of them require some form of medication to stay asleep.

The issue of getting sufficient shut-eye in space – a necessity for an astronaut's brain, so it can stay sharp for the complex tasks of the mission – has been receiving greater attention. Not only that, as a bonus, that renewed focus in this study may help us Earth-planted humans improve our sleep here.

Over a recent 18-month stretch, astronauts on the international space station, or ISS, were removing standard fluorescent lighting and installing light emitting diode (LED) fixtures. Instead of having just an on/off switch, each has three settings simulating natural light, as well as the sun's changing intensities during its daily arc through the sky. The test, NASA states, seeks to study whether this different type of light exposure can improve astronauts' "circadian rhythms, sleep, and cognitive performance."

The centerpiece of the experiment is the Dynamic Lighting Schedule. or DLS, which produces different lighting through the course of an ISS "day."

The first setting, for an ordinary working environment, is dominated by blue wavelengths that help reset the circadian clock. Then, there's "short wavelength (blue-appearing) light [which] is most effective at ... promoting alertness and performance." Last, a "setting of lower intensity, blue-wavelength-depleted light is intended for use for as long as possible before bed," to induce sleepiness.

“It is just a matter of choosing the right light bulb for the right time of day,” said Steven Lockley, Ph.D, a principal investigator in the study and neuroscientist at Brigham and Women’s Hospital, speaking to the Wall Street Journal. If getting uninterrupted sleep is a problem "[t]his is something you can do in your own home.”

"Research has shown that monochromatic and narrow-bandwidth short-wavelength blue light are potent in suppressing nocturnal melatonin, phase-shifting the circadian pacemaker, and enhancing alertness and performance," a NASA statement reads. "Further, white-appearing light can be enriched in the blue portion of the spectrum to increase its potency to suppress melatonin, increase alertness, improve work performance and enhance sleep in healthy subjects."

Sufficient sleep – a recommended 7-to-9 hours daily for adults aged 26 to 64 – is essential to overall good health, whether you're on this planet or orbiting around it. And illness can surface when too much sleep is sacrificed.

The ISS lighting project gains in importance as space exploration pros focus on longer missions, like one that might someday take astronauts to Mars. That's some 35 million miles away from Earth (at its closest point) during the Red Planet's orbit around the Sun, an extended one-way journey which would take at least hundreds of days, if not a year to complete.

Quelle: THE AMERICAN COUNCIL ON SCIENCE AND HEALTH