Astronomers have discovered three more red, dusty objects near the Milky Way’s central black hole that could be merged stars. 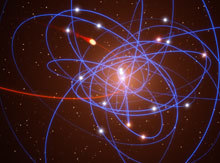 The object G2 (red-yellow blob above center, with orbit shown in red) zoomed by the supermassive black hole in the Milky Way's core in 2013 and 2014. The stars orbiting the black hole are also shown along with blue lines marking their orbits. The stars and the cloud are shown in their actual positions in 2011.

The objects are bright in wavelengths that catch emission from hydrogen, but they’re not distended like stretched-out clouds. Instead, they’re compact, ensconced in dust and gas.

This isn’t the first time that astronomers have detected objects like these near the black hole. Two others, called G1 and G2, follow slingshot paths around Sgr A*. G2 in particular mobilized teams across the world after its discovery in 2012, as observers watched the cloud-like object plunge through its closest approach to the black hole in 2013 and 2014, waiting to see if it would shock-heat any gas in the vicinity. (It didn’t, much to their dismay.) Although the black hole’s gravity did disrupt G2’s shroud as it sailed by, the object survived the pass, leading many astronomers to suspect there’s actually a star hiding inside.

Now, as part of a reanalysis of 12 years of Keck data, Ciurlo, Campbell, and their colleagues have found three more G objects, which they’re appropriately calling G3, G4, and G5.

The objects all look like their predecessors: They’re compact, bright in hydrogen emission, and red and dusty. With surface temperatures of a few hundred kelvin, they’re much cooler than any normal star (about 2000 kelvin and up). They’re moving maybe a tenth as fast along our line of sight as G1 and G2 do, but they’re actually brighter at the wavelengths the team studied.

Although many theories exist to explain what the G objects are, the team working out of UCLA’s Galactic Center Orbits Initiative and their collaborators hope that the mysterious sources might be the key to understanding the stars nearest Sgr A*. In terms of stellar neighbors, our galaxy’s central black hole lives in a dense urban environment. Within about one-tenth of a light-year there are some three dozen young, massive B-type stars, accompanied by an unknown number of smaller, fainter stars lurking just beyond detection. These stars loop around the black hole in fairly elongated orbits, some coming within a few hundred Earth-Sun distances of it.

The problem is, star formation should be impossible here: Sgr A*’s gravitational tides should rip apart the clouds of hydrogen that collapse into stars. Astronomers only expected to find older, redder stars that have sunk here over time from elsewhere in the galaxy. 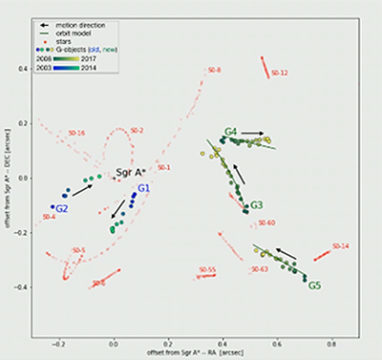 Preliminary analysis of data shows the motion of G3, G4, and G5 from 2006 (green points) through 2017 (yellow). The solid green line shows the tentative interpretation of the orbits, and the black arrows show which direction each object is moving.
Anna Ciurlo et al. / abstract 402.05, 232nd AAS

The answer might be what’s called the eccentric Kozai-Lidovmechanism. When a binary star system orbits a supermassive black hole, the black hole plays havoc with the stars’ orbits around each other. Over time, those orbits become more elongated, making the stars’ closest approach to each other even closer. Eventually, the stars can actually merge. When they do so, they create a new, more massive star, surrounded by a dusty red gas cloud that dissipates in about a million years, leaving behind a young, massive star — a star that might look just like the puzzling B stars around Sgr A*.

The team doesn’t have enough data yet to conclusively nail down the new objects’ orbits, Campbell says, but they think the three take between 200 and 400 years to go around the black hole, which is within about a factor of 10 or so of the periods for the various B stars. G5 might swing by Sgr A* in 15 to 30 years, but the team doesn’t know how close it’ll come — that analysis is still in the works.

Those preliminary orbits introduce a wee snag in the explanation for how G3, G4, and G5 came to be. The eccentric Kozai-Lidov mechanism works best on binaries that follow highly elongated paths around the black hole. But although G5 appears to follow a route much like G1’s, G3’s orbit looks pretty circular. That raises the question of whether all the G objects truly have the same origin. For now the hypothesis is yes, Ciurlo says, but this is a complicated region and she and her colleagues are still teasing out what’s going on.

You can read more about the stars around our galaxy’s black hole in our upcoming September issue, where we’ll have a feature written by yours truly. In the meantime, here's a link to the AAS press conference video and the Keck press release.