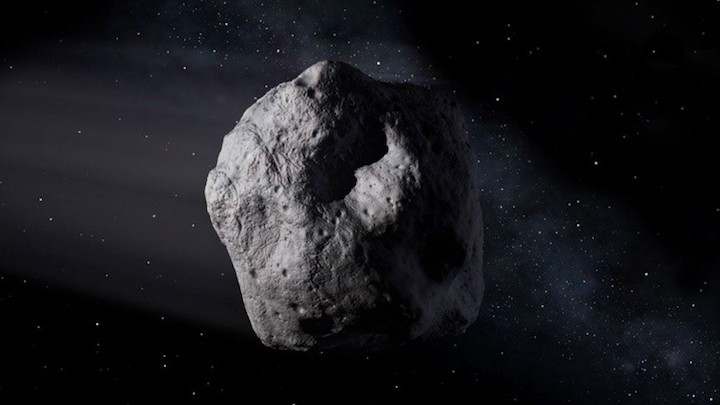 A small asteroid about the size of a boulder slammed into Earth's atmosphere Saturday (June 2), incinerating itself in a brilliant fireball caught on video.

Scientists discovered the asteroid, called 2018 LA, early Saturday. After a closer look at the space rock's trajectory, it "was determined to be on a collision course with Earth, with impact just hours away," NASA officials said in a statement. The asteroid hit Earth's atmosphere over the southern African nation of Botswana at 12:44 p.m. EDT (1644 GMT) while hurtling down at a whopping 38,000 mph (61,155 km/h). That's 10 miles (or 17 kilometers) every second!

Astronomers with the Catalina Sky Survey near Tucson, Arizona, were the first to discover the asteroid. The space rock was very faint, with observations suggesting it was just 6 feet (2 meters) across — small enough to burn up completely during its fiery plunge through the atmosphere, NASA officials said. [Asteroid Threat: Potentially Dangerous Space Rocks in Pictures]

"The discovery of asteroid 2018 LA is only the third time that an asteroid has been discovered to be on an impact trajectory," Paul Chodas, manager of the Center for Near-Earth Object Studies (CNEOS) at NASA's Jet Propulsion Laboratory (JPL) in Pasadena, California, said in the statement. "It is also only the second time that the high probability of an impact was predicted well ahead of the event itself."

The asteroid's fiery demise was caught on camera by spectators, who later posted their footage to YouTube. In one video, from a farm between Ottosdal and Hartebeesfontein in South Africa, the asteroid appears as a brilliant streak that flares up into a spectacular fireball on the horizon.

Asteroid 2018 LA was nearly as far away as the moon (which is typically about 239,000 miles, or 384,600 km, from Earth) when it was discovered on Saturday, NASA officials said. It looked like little more than a streak in long-exposure images by the Catalina telescope.

"This was a much smaller object than we are tasked to detect and warn about," Lindley Johnson, NASA's planetary defense officer, said in the statement. "However, this real-world event allows us to exercise our capabilities and gives some confidence our impact prediction models are adequate to respond to the potential impact of a larger object."

Catalina Sky Survey astronomers reported the asteroid finding to the Minor Planet Center in Cambridge, Massachusetts, which managed to calculate a preliminary trajectory for the asteroid. That trajectory plot was the first hint that 2018 LA could hit Earth.

The Minor Planet Center then reported the asteroid to CNEOS. JPL's automated Scout system, which tracks asteroids, confirmed 2018 LA was on a collision course with Earth and sent observation alerts out to asteroid observers to try spotting it.

While this isn't the first time a small asteroid has been spotted just before it hit Earth, it certainly isn't that common. Only two other instances come to mind, according to JPL.

On Oct. 7, 2008, the 13-foot (4 m) asteroid 2008 TC3 hit Earth over northern Sudan. That asteroid was spotted 19 hours before impact, enough time for scientists to plot a precise trajectory for the falling space rock. Later expeditions used that trajectory to find meteorite fragments of 2008 TC3.

The second event occurred Jan. 1, 2014, when the asteroid 2014 AA was spotted just a few hours before it fell over the Atlantic Ocean.

All three asteroids were discovered by the Catalina Sky Survey while astronomer Richard Kowalski was overseeing observations, NASA officials said. NASA scientists and astronomers around the world regularly observe the sky for any signs of potentially dangerous asteroids that could pose an impact threat to Earth.

Neither asteroid 2018 LA nor its two predecessors were large enough to cause the type of damage seen in 2013, when an asteroid about 56 feet (17 m) wide exploded over the Russian city of Chelyabinsk. The fireball shattered windows and damaged thousands of buildings, leaving more than 1,200 people injured.