Georg von Tiesenhausen, the last of the German rocket team that launched the U.S. space program, has died at his Alabama home. He was 104.

Von Tiesenhausen started his career in 1943 at the German Rocket Center in Peenemeunde, Germany, where he held the position of section chief. It was there that his career in rocket development began.

The famed scientist worked alongside Wernher von Braun during World War II in Germany. Several years after the war, von Tiesenhausen joined von Braun in Huntsville, Alabama. While there, von Tiesenhausen proved instrumental in forming the backbone of the U.S. space program, ultimately aiding in the launch of the first U.S. satellite and the first U.S. astronauts. While at the Marshall Space Flight Center, von Tiesenhausen designed and created the famous lunar rover that accompanied the last three Apollo missions in 1971 and 1972.

Von Tiesenhausen developed the reputation as Marshall's resident dreamer, working tirelessly to achieve his goal of establishing a permanent lunar base and then one on Mars.

The rocketry pioneer was presented a lifetime achievement award in 2011 by Neil Armstrong at the rocket center in Huntsville. Von Tiesenhausen was fondly known as "Von T" by his colleagues, including Armstrong.

"He is and has been a person who imagines what can be, and he has the skills to convert that imagine into reality," Armstrong said in 2011. The award acknowledged von Tiesenhausen as an innovative space designer and an engaged man who still worked with students.

In 1986, von Tiesenhausen announced his plan to retire from Marshall after a career that spanned more than four decades. After his retirement, he continued working with the center, specifically with the center's space camps where he taught space campers.

"He will be missed," Huntsville Mayor Tommy Battle told Al.com. "He's the last of a generation that was always reaching for the stars." 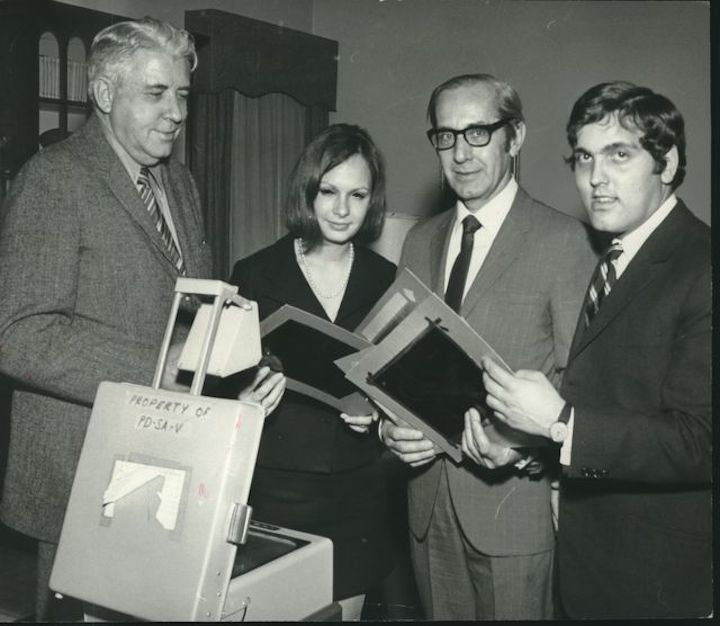 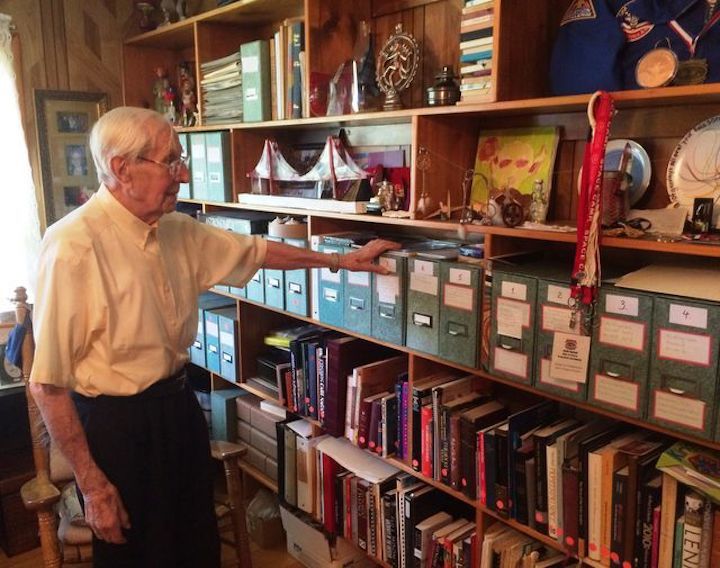 Georg von Tiesenhausen, who turns 101 on May 18, 2015, says he is the last surviving German member of Wernher von Braun's rocket team. Von Tiesenhausen was interviewed in his home in Huntsville on May 13, 2015, and discussed his life on the team and now. He also showed off his library. (Lee Roop/lroop@al.com) 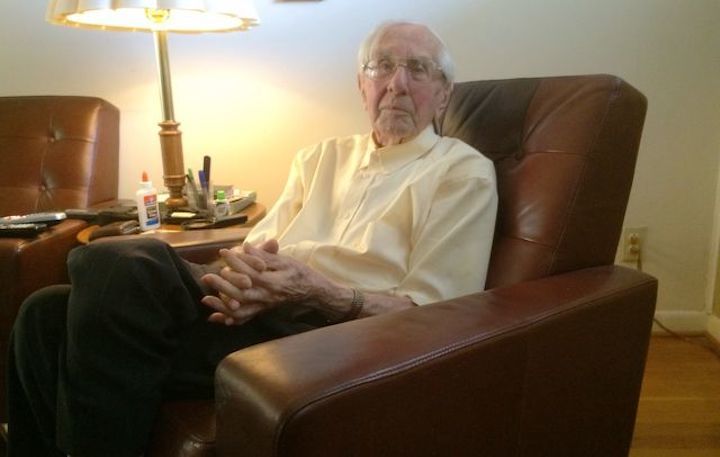 Georg von Tiesenhausen, who turns 101 on May 18, 2015, says he is the last surviving German member of Wernher von Braun's rocket team. Von Tiesenhausen was interviewed in his home in Huntsville on May 13, 2015, and discussed his life on the team and now. He also showed off his library. (Lee Roop/lroop@al.com)

Dr. Georg von Tiesenhausen, the last of the German rocket scientists who was part of Dr. Wernher von Braun's moon rocket team, died at his Huntsville residence Sunday night, people close to the rocket team confirm. He was 104.

Von Tiesenhausen - Von T as he was known to the Germans - was a legend in rocketry. When the U.S. Space & Rocket Center in Huntsville gave von Tiesenhausen a lifetime achievement award in 2011, Neil Armstrong made a rare public appearance to present it. Von Tiesenhausen taught Space Campers for years after retiring from NASA.

"He will be missed," Huntsville Mayor Tommy Battle said on learning of von Tiesenhausen's death. "He's the last of a generation that was always reaching for the stars."

Von Tiesenhausen was not among the original Germans who came to Huntsville with von Braun in 1950 in the first wave of what was called Operation Paperclip.

After a few years working in Germany after the war, von Tiesenhausen joined von Braun in Huntsville where he conceived and designed the mobile launch facilities for the Saturn V. He also came up with the idea and designed the original concept for the lunar rover at Marshall.

"He convinced von Braun we ought to design a moon buggy to go to the moon with the astronauts," remembers Ed Buckbee, a NASA public affairs officer under von Braun and the first director of the U.S. Space & Rocket Center. "It took a lot of sales effort on the part of von Braun, von Tiesenhausen and others to convince headquarters that, 'Look we need to give those guys some legs on the moon. Give them the ability to extend their reach.' And sure enough, we did. It really needs to be recognized. He put wheels on our American astronauts on the moon's surface."

The astronauts came to see the value of the rover, too. Eugene Cernan, the last man to walk on the moon, put the rover among the mission highlights of Apollo 17. "Apollo 17 built upon all of the other missions scientifically," Cernan said in 2008. "We had a lunar rover, we were able to cover more ground than most of the other missions. We stayed there a little bit longer. We went to a more challenging unique area in the mountains, to learn something about the history and the origin of the moon itself."

There was no immediate word Monday on funeral services. Family members who live outside Huntsville were reportedly returning to the city where they had just gathered to celebrate von Tiesenhausen's 104th birthday on May 18.

The Last NASA Scientist to Work on Nazi Rockets Has Died

Georg von Tiesenhausen helped NASA get humans on the moon, but before he was brought to the US through Operation Paperclip, he was designing missiles for the Nazis. 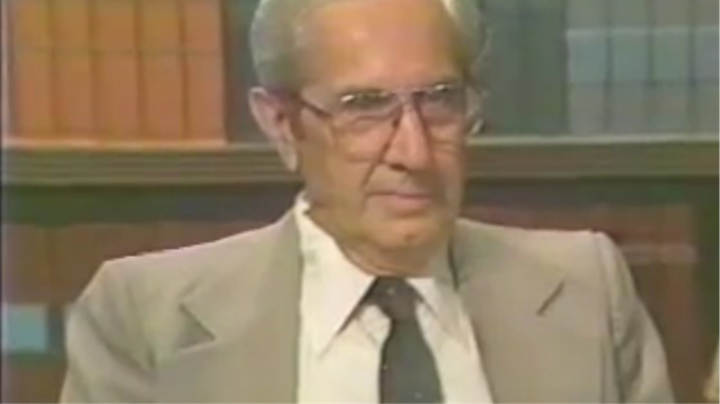 On Tuesday, the Associated Press reported that the rocket scientist Georg von Tiesenhausen had died at his Alabama home at the age of 104. Von Tiesenhausen was the last living NASA scientist to have worked on Nazi rockets after being brought to the US as part of the secretive Operation Paperclip.

Von Tiesenhausen, known as “Von T” by those close to him, dedicated his life to rocket science. When Niel Armstrong presented him with the US Space and Rocket Center’s Lifetime Achievement Award in 2011, he described von Tiesenhausen as “one of those rare individuals who has a natural ability to inform and inspire, to educate and motivate, and most remarkably, to endure.” During his decades-long career with NASA, von Tiesenhausen worked on the platform that moved the massive Saturn V rocket used to carry the first men to the moon to its launch pad. However he is perhaps best known for his conceptual design of the lunar rover that was used on the last three crewed Apollo missions to the moon.

Before he worked at NASA, however, von Tiesenhausen cut his teeth as a rocket scientist at Peenemünde, the Nazi’s premiere weapon research center.

“To enter the area of Peenemünde was one of the greatest surprises of my life,” von Tiesenhausen said in a television interview from the 80s. “Since the age of 14 I knew exactly what I wanted to do with the rest of my life: To be involved in rocketry and spaceflight.”

The research center was best known as the stomping grounds of the pioneering rocket scientist Werner von Braun—who was Peenemünde’s director— and von Tiesenhausen spent his days at the research center as a section officer working on the Nazi’s V-2 rocket. This rocket is infamous for being the world’s first long range, guided ballistic missile.

Unlike von Braun, who joined the Nazi party before World War II and served as a member of the SS, von Tiesenhausen’s joined von Braun’s Peenemünde team in 1943 fresh out of Hamburg University where he had studied engineering after a brief stint in the army. He had been recruited as part of a wider effort in Germany that year to beef up the Nazi regime’s science and engineering corps, which included recalling thousands of scientists from the front lines.

Von Tiesenhausen initially focused on designing test stands for V-2 engines, but by the end of the war he had been tasked with working on a top secret project code-named Test Stand 12. This project aimed to develop a fleet of mini-submarines that would be capable of launching V-2 rockets at distant targets. "We wanted to give the V-2 a long range, say to launch it to Manhattan,” he recalled of his work on the project at Peenemünde. “Not just one, but as many as possible.”

Fortunately, the war ended before the project ever made it beyond a prototype phase. 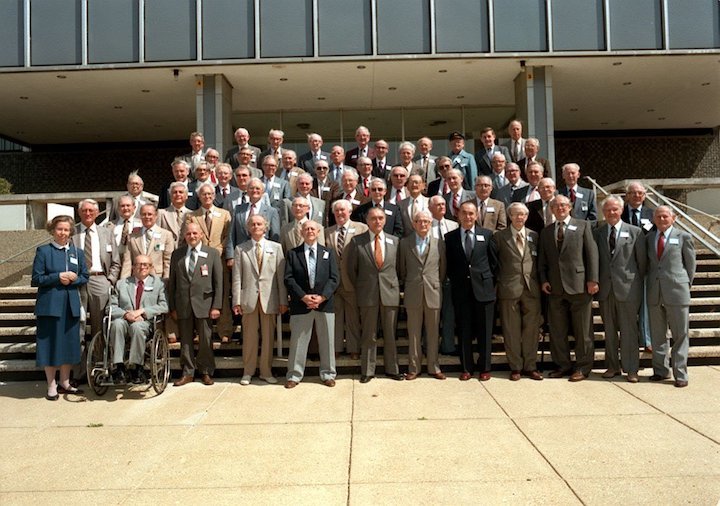 The members of NASA's German team that worked for von Braun, assembled at a reunion in 1987. Image: Internet Archive

Following the war, the United States began bringing hundreds of German scientists and engineers to America as part of Operation Paperclip. Many of the Germans were enlisted to help work on rockets for NASA and the military, including von Braun, who arrived in the US in 1945 and was stationed at an Army facility in Huntsville, Alabama starting in 1950. Three years later, von Tiesenhusen was also relocated to the Huntsville facility where he would initially work on Redstone rockets for the military.

“After the war, I was fortunate to be invited to the United States to work on weapons systems, ironically,” von Tiesenhausen said, noting the similarities between the Nazi’s rocket programs and the United States’ rocket programs. “The early days of Peenemünde laid the ground stone for what we were doing here. Our first missile here, the Redstone, was just a glorified V-2. The people at Peenemünde were really the originators of most of the concepts we deal with today.”

After a few years working on missiles for the military, von Tiesenhausen was transferred to NASA’s Marshall Spaceflight Center to help with the Apollo program. This is where he would spend the next thirty years working on cutting edge space exploration concepts.

“We were the only group at that time that knew how to build long range rockets,” von Tiesenhausen said, referring to von Braun’s team in a wide-ranging interview from 1988. Despite their expertise, von Tiesenhausen noted that some Americans felt uneasy about the Germans working for the US after the war, even if the relationship between von Braun’s team and their American military colleagues was mostly cordial.

“There were certain ethnic groups—Jewish groups, mainly—in the United States who were against us in principle,” von Tiesenhausen said. “The ethnic prejudices operated the entire time we had the von Braun team. The prejudice was not across the board, it was just certain individuals. My colleagues and I had excellent relationships to a number of Jews, which were in different positions at headquarters.”

Despite these underlying tensions, von Tiesenhausen soon became an “in house brainstormer” for NASA who was responsible for coming up with new ideas. In 1959, he came up with the idea for a lunar rover, which von Tiesenhausen described as “a disaster,” based on senior officials’ reaction to the idea. Yet 12 years later, a rover almost identical to the one designed by von T would carry astronauts across the lunar surface.

Von Tiesenhausen worked on various Apollo-related projects during the 60s and 70s, as well as helping NASA develop its robotic space exploration program. Yet when he was approached and asked to support President Ronald Reagan’s Strategic Defense Initiative, commonly known as Star Wars, he refused. “I had a principle,” von Tiesenhausen said. “I worked on weapons systems long enough in my life and I didn’t want anything to do with that, especially as a NASA employee.”

By the late 80s, von Tiesenhausen had retired from active technical development at NASA and spent most of his later working years helping with space educational programs, such as giving presentations to kids at space camp.

It’s a rather soft landing for a man who once developed submarine missiles meant to destroy New York City, even if von Tiesenhausen’s wartime activities seemed to cultivate within him a desire to see peaceful space exploration replace space warfare. At a time when the Trump administration is ramping up calls for a space force in the military, von Tiesenhausen’s vision seems like impossible idealism, but at one point, so did his ideas for a lunar rover.