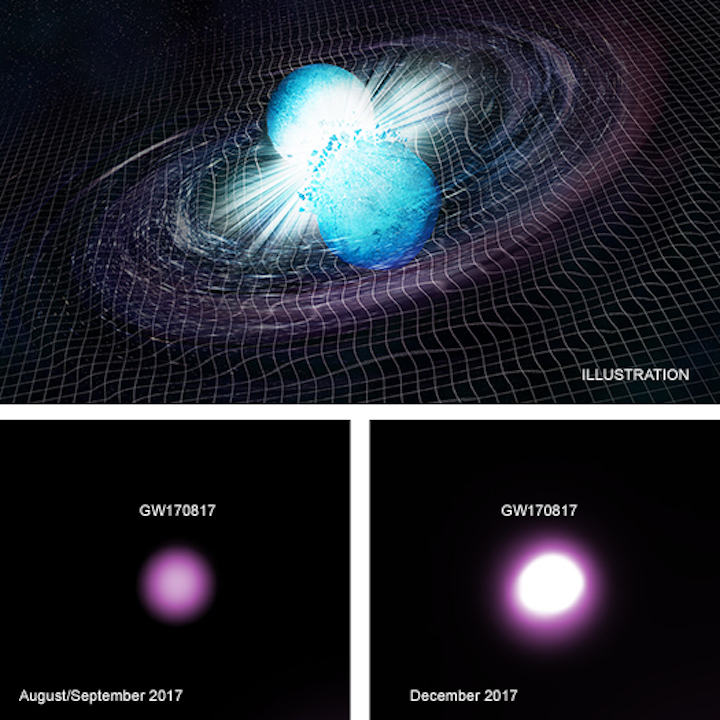 The spectacular merger of two neutron stars that generated gravitational waves announced last fall likely did something else: birthed a black hole. This newly spawned black hole would be the lowest mass black hole ever found.

A new study analyzed data from NASA's Chandra X-ray Observatory taken in the days, weeks, and months after the detection of gravitational waves by the Laser Interferometer Gravitational Wave Observatory (LIGO) and gamma rays by NASA's Fermi mission on August 17, 2017.

While nearly every telescope at professional astronomers' disposal observed this source, known officially as GW170817, X-rays from Chandra are critical for understanding what happened after the two neutron stars collided.

From the LIGO data astronomers have a good estimate that the mass of the object resulting from the neutron star merger is about 2.7 times the mass of the Sun. This puts it on a tightrope of identity, implying it is either the most massive neutron star ever found or the lowest mass black hole ever found. The previous record holders for the latter are no less than about four or five times the Sun's mass.

"While neutron stars and black holes are mysterious, we have studied many of them throughout the Universe using telescopes like Chandra," said Dave Pooley of Trinity University in San Antonio, Texas, who led the study. "That means we have both data and theories on how we expect such objects to behave in X-rays."

The Chandra observations are telling, not only for what they revealed, but also for what they did not. If the neutron stars merged and formed a heavier neutron star, then astronomers would expect it to spin rapidly and generate a very strong magnetic field. This, in turn, would have created an expanding bubble of high-energy particles that would result in bright X-ray emission. Instead, the Chandra data show levels of X-rays that are a factor of a few to several hundred times lower than expected for a rapidly spinning, merged neutron star and the associated bubble of high-energy particles, implying a black hole likely formed instead.

If confirmed, this result shows that a recipe for making a black hole can sometimes be complicated. In the case of GW170817, it would have required two supernova explosions that left behind two neutron stars in a sufficiently tight orbit for gravitational wave radiation to bring the neutron stars together.

"We may have answered one of the most basic questions about this dazzling event: what did it make?" said co-author Pawan Kumar of the University of Texas at Austin. "Astronomers have long suspected that neutron star mergers would form a black hole and produce bursts of radiation, but we lacked a strong case for it until now."

By comparing the Chandra observations with those by the NSF's Karl G. Jansky Very Large Array (VLA), Pooley and collaborators explain the observed X-ray emission as being due entirely to the shock wave — akin to a sonic boom from a supersonic plane — from the merger smashing into surrounding gas. There is no sign of X-rays resulting from a neutron star.

The claims by Pooley's team can be tested by future X-ray and radio observations. If the remnant turns out to be a neutron star with a strong magnetic field, then the source should get much brighter at X-ray and radio wavelengths in about a couple of years when the bubble of high energy particles catches up with the decelerating shock wave. If it is indeed a black hole, astronomers expect it to continue to become fainter that has recently been observed as the shock wave weakens.

"GW170817 is the astronomical event that keeps on giving," said J. Craig Wheeler, a co-author on the study also from the University of Texas. "We are learning so much about the astrophysics of the densest known objects from this one event."

If follow-up observations find that a heavy neutron star has survived, such a discovery would challenge theories for the structure of neutron stars and how massive they can get.

"At the beginning of my career, astronomers could only observe neutron stars and black holes in our own galaxy, and now we are observing these exotic stars across the cosmos," said co-author Bruce Grossan of the University of California at Berkeley. "What an exciting time to be alive, to see instruments like LIGO and Chandra showing us so many thrilling things nature has to offer."