Last March, Robbie Graham (author of Silver Screen Saucers, 2015) discussed a video essay on Vox website examining “Why we imagine aliens the way we do”. His conclusions about the video are debatable.

Even if it would be correct to say that “it’s not quite as simple as Vox is suggesting”, that we don ́t simply conceptualize aliens entirely because of science fiction, it is ridiculous to dismiss such a clear influence, specially in the case of the so called “alien abductions”. Many skeptical ufologists such as myself have showed beyond any reasonable doubt that, not only small details or images but up to the overall themes had appeared earlier in SF stories and comics.

To use his own example (the iconic Grey from the first Strieber’s book cover), few people know that years later, the famous writer of horror novels revealed that such effigy was WRONG, that his aliens DID have hair in the big heads.3 So, Graham is quite correct when he says that “by the late-1990s, the image of the Gray had supplanted almost all other pre-existing cultural imaginings of what an alien might look like...” but, that also apply to the abductees’ narratives as well. Why some many “experiencers” described such an inexistent feature?

To an antediluvian ufologist such as myself, it is quite exasperating the audiovisual chauvinism of Internet nowadays. Before the present Hollywood blockbusters, there were (and still survive) television series, comics, radio (always forgotten) and even the print- ed paper. It is true that “even in a world without movies, people would continue to report UFOs”... but also lake monsters, Bigfoot, or BVM apparitions. This fact did not give any of them the ontological property of being a real phenomenon.

Martin Kottmeyer has proved beyond any reasonable doubt that the image of the Big Head Alien was first described by H.G. Wells in his story“1.000.000 A.D.”Afterwards, the idea was repeated almost to exhaustion in the SF pulp novels and elsewhere. Consult his “Varicose Brains” series. 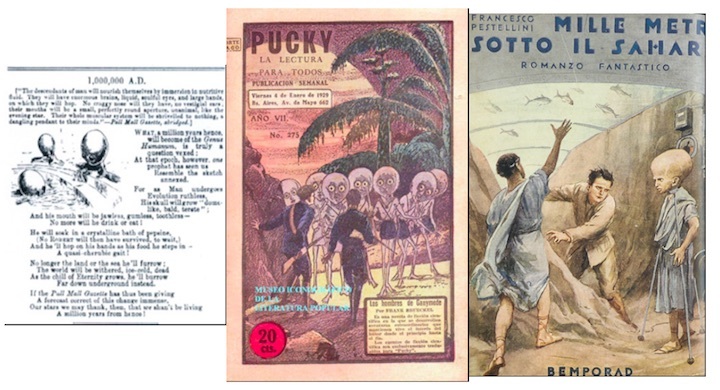 It could be said with only slightly exaggeration that there are no two equal aliens in all the pre-abduction UFO literature. Besides the more or less anthropomorphic features (a clear betrayal of their origin) and a certain preponderance of dwarfism, any effort to catalogize them soon proved useless. 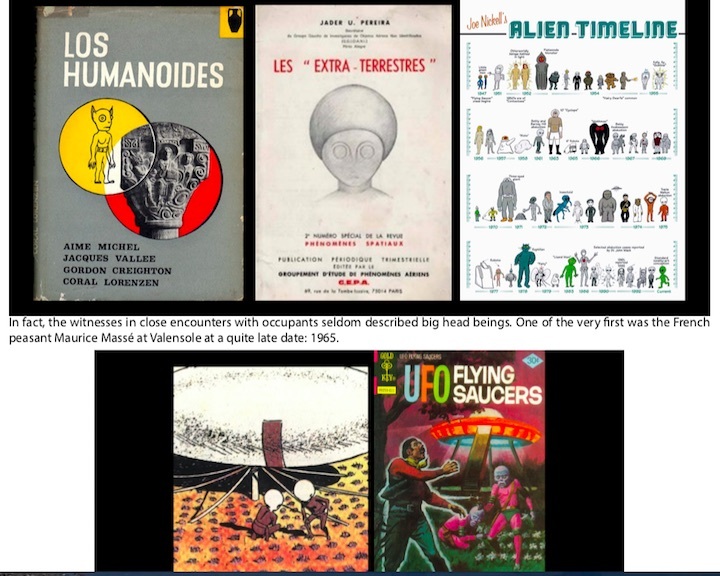 The relationship between Spielberg’s Close Encounters of the Third Kind and Ufology is not as direct as Graham pretends.6 Many years ago, Kottmeyer challenged believers to provide what witness drawings existed at the time of the making of the film that had big all-black eyes and or the thin high neck, since no history of the film shows real-life witness sketches reached the designers of the aliens. He is still waiting.

Funnily, Graham himself argues that if life (Ufology) imitates art (Hollywood), then “following the release of James Cameron’s Avatar (2009), the highest grossing film of all time, we might reasonably have expected thousands of people to have begun reporting ten- foot-tall blue aliens.” Things are not so simple. For instance, one has to take into account censorship, either by the witness himself or the investigators, who would quickly realize the connection and discard the story. Besides, nowadays aliens are everywhere. It is difficult to find clear precedents.

But if Graham had considered the situation just before the big media explosion of the subject, in the last decade of the XXth century, he should have looked no further than CE3K, the very first big and successful film based in Ufology. Sometimes, subtle details did escape the believer’s eyes: Such is the case with those absurdly big heads supported by even more ridiculous thin necks. As Kott- meyer pointed out, this kind of alien only appeared after the film. At least, the designer of the 1938 Italian cover presented before, did provide his subject with some kind of cephalic crutches.

Before 1995, the number of films clearly inspired by UFOlogy were very scarce: The UFO Incident (1975), Starship Invasions and Close Encounters of the Third Kind (1977), Communion (1989), and Fire in the Sky (1993). If XXIst century’s Hollywood owes an immense debt to UFOlogy, it would be only cashing the interest due by the debt UFOlogy maintains with all the written and TV SF that pre- ceded and went along it since Kenneth Arnold’s sighting in 1947. 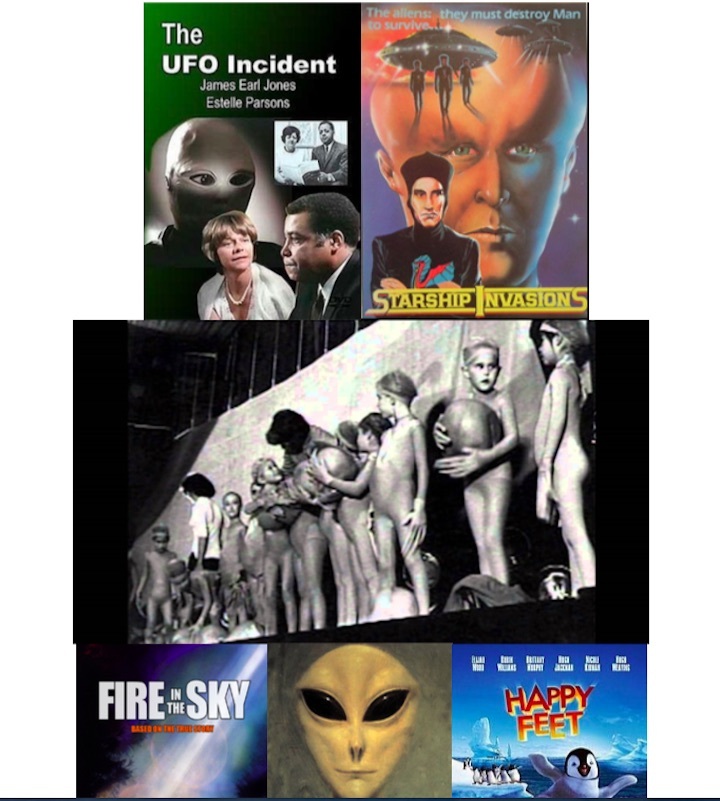