New paper argues that some extraterrestrials may be struggling to make it off their planets. 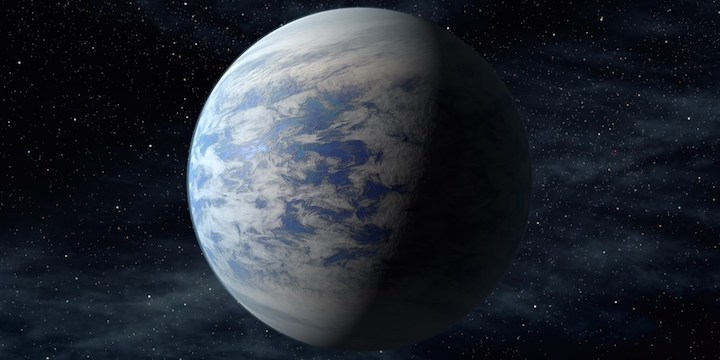 Here’s a problem that probably hasn’t occurred to you: A lot of space aliens might have difficulty becoming a spacefaring species.

Michael Hippke, an affiliate at Germany’s Sonnenberg Observatory, explains the problem in a new paper. It’s because most of the exoplanets we think would be suitable for spawning intelligent beings are larger than Earth. They’re “super-Earths,” with diameters that are typically 1.2 to 2 times that of our own world. Such porky planets are 50 percent more common than Earth-sized worlds, at least among the exoplanets we’ve found so far.

What does this have to do with alien space programs? As Hippke notes, aliens using chemical rockets like ours would have a hard time launching anything into space from such worlds, simply because the gravity there is stronger.

Well, that’s true. On a planet whose diameter is twice that of Earth, you’d weigh twice as much as you do on terra firma. Lamentable. But if you assume that sending a spacecraft into the void from such a planet would require a rocket twice the size of its terrestrial counterpart, you’re wrong. At least you’re wrong if you’re talking about a rocket of the type we use.

Our rockets are like airplanes: They take their fuel with them. The faster you want to go, the more kerosene and liquid oxygen you have to take along. Escaping the gravity of a super-Earth would require rockets that dwarf those we’ve built. And so Hippke argues that the challenge of building such massive missiles might discourage the denizens of a super-Earth from venturing beyond their home world.

That’s a strong statement, and it seems off target. It would be harder for the super-Earth citizenry to boldly go, but it wouldn’t be that much harder.

Consider SpaceX’s Falcon Heavy rocket. It weighs 1,500 tons and can heave 17 tons into deep space. On the larger of the super-Earths (twice our world’s size and with eight times its mass), a scaled-up Heavy would weigh 15,000 tons to do the same. All other things being equal, it would be a little over twice as high as the Falcon, or 40 percent taller than the Saturn V rocket that sent astronauts to the moon.

That would be an impressive hunk of hardware to have in your front yard, but nothing that Earthlings — or Vulcans — couldn’t build. For most super-Earths, which are smaller than we’ve considered here, the engineering challenges would be even less formidable.

Some of Hippke’s calculations seem to be in error, leading him to overestimate the challenges to space programs on super-Earths. But even if stronger gravity delayed the inhabitants of these worlds from getting off their planet by 50 or 100 years, you have to ask: so what? Does that bump in the road matter more than the fact that the larger size of their planet would delay the laying of telegraph cables from one continent to another, or that long-distance transport would be slower, simply because the distances would be — well — longer?

Besides, a heftier world might have certain advantages. More gravity would mean a thicker atmosphere, which might speed the development of aviation. Greater acreage might bring a wider diversity of animals, possibly producing intelligence sooner than happened on Earth. And one could expect more abundant natural resources on an oversized world.

Planets of differing size offer differing challenges to their inhabitants. But the really significant problems are unlikely to include the fact that kerosene rockets would be a bit harder to build. The presence of a large, nearby moon — a tempting target for space exploration — might be a greater factor in the development of spaceflight.

Three centuries ago, Gottfried Leibniz suggested that we live in the best of all possible worlds. That might or might not be true. But I would hesitate to judge the worth of our planet, or anyone else’s, by the size of its rockets.

Dr. Seth Shostak is the senior astronomer at the SETI Institute in Mountain View, California and a noted expert on the search for extraterrestrial intelligence.

Astronomie - Could space aliens on hefty super-Earths be trapped by their own gravity?
« Zum vorherigen Eintrag Zum nächsten Eintrag »
2130 Views
Created with page4