This case is a “Two-fer”. It is listed as both an UNIDENTIFIED in the Blue Book files and the UFO evidence. The UFO evidence describes the case as:

At 9:29 p.m., March 31, 1950, a Chicago & Southern Airlines plane was flying at 2,000 feet on a southwesterly course near Little Rock, Arkansas. Captain Jack Adams and Co-pilot G. W. Anderson, Jr., suddenly noticed a distinct circular object, apparently disc-shaped approaching from the left. The UFO passed in an arc above their plane, proceeding north at an estimated 700 to 1,000 mph. Eight to 10 lighted windows or ports were visible on the underside, and “the strongest blue-white light we’ve ever seen” flashed intermittently from the top. The pilots told official investigators they believed they had witnessed some secret experimental craft. To this date, the sighting remains un- explained. 2

Note that in this section of document, the date is erroneous. The references were the July 1950 issue of Flying magazine and the Memphis “Commercial appeal” of March 22, 1950.

Sparks seems to think there is a question about the date but it clearly is stated to have transpired on the date of 20 March. News accounts of the time give the date and there is no conflict of the dates in the BB files. I suspect he put question marks on these dates because other sources (like NICAP) listed those dates.

Another source of information about this case can be Loren Gross, who has an interesting section in his history of UFOs Janu- ary-March 1950.5 In the news accounts in his writings, the time duration was listed as about 45 seconds 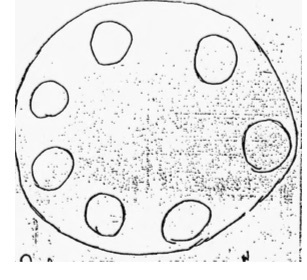 The record really does not contain much information. There is a summary of the sighting and a report made by Majors Richard Easley and Dewey Orr, who interviewed the pilots about their sighting. To summarize:

Portholes or something else?

According to Ruppelt, the USAF investigators suggested to Captain Adams they had seen a meteor.

He reported that to the Air Force and some red-hot character met him in Memphis on his next trip. He talked to Adams a few minutes and then told him that he’d seen a meteor. Adams felt like a fool. Hell, I know Jack Adams well and he’s the most conservative guy I know. If he said he saw something with glowing portholes, he saw something with glowing portholes - and it wasn’t a meteor.8

This is probably why many of the news accounts have him denying he had seen a meteor. Despite these denials, I have to wonder if that wasn’t exactly what they had seen.

Much of the description matches the Chiles-Whitted sighting of 1948, which some UFO proponents have conceded was probably a bright fireball. All one has to do is look at the history of such fireballs being reported as UFOs to see that it is not uncommon to describe them as objects with disc or cigar shapes, which included portholes. Zond IV and Chiles-Whitted are two examples but there are others. For instance, this sketch of the April 25, 1966 fireball event also shows portholes:

Observing “port holes” does not mean that what was seen was an actual craft. While not all fireballs produce this effect, any event that produces a fragmenting object with multiple light sources can sometimes be described as a craft with port holes. It is an illu- sion that Dr. William Hartmann referred to as the “airship effect”. 10 Witnesses are basically taking the multiple light sources, assum- ing they are “windows” and then creating a craft around them.

The biggest problem with the fireball explanation is the duration stated by the pilots. We have a range of durations between 25 and 45 seconds depending on the source. Is 25-45 seconds too long to be a Bolide? I don’t think so based on some long duration fireball videos I examined from 2017.

While only one of these fall into the 25-45 second range, we also have to wonder if the time estimate is even accurate. My experi- ence with bright fireballs is that the longer the duration, the harder it is to make an accurate estimate of the time elapsed. Watching some of the videos of these events from 2017 had me thinking about how slow these meteors appeared. They seemed to be visible for an eternity compared to the shorter duration fireballs I am familiar with. While there is no direct evidence that people tend to overestimate meteor durations in long fireball events, one can see overestimates in some of the fireball events listed in the Amer- ican Meteor Society’s database. It is interesting that Captain Adams told official investigators that it was 25-35 seconds but then increased the value when talking to the press.

I found one documented experiment designed to determine how accurate fireball durations were estimated.10 In 1935, Bemrose Boyd conducted an experiment involving a bright light on top of a radio mast at an observatory, which was turned on and off.

Observers on the grounds of the observatory, unaware the event was going to happen, were later asked to estimate the duration the light was energized. The average error for the estimated duration was 146.6%. Additionally, a 1987 study by Elizabeth Loftus, Jonathan Schooler, Stanley Boone and Donald Kline indicated people tend to overestimate time durations of events by a factor of two or more.11 While these experiments were videos of bank robberies, and not meteors, they do indicate the problems with people estimating time durations of significant length.

Furthermore, I have examined reports in the Blue Book system compared to known meteor fireball events. One case involved a fireball on June 15, 1955. An observer in Des Moines, Iowa reported to Sky and Telescope that he had seen a fireball at 9:18 PM CST on June 15.12 In the Blue Book system, there is a report by a USAF pilot from Topeka, Kansas, who reported the same event (listed as 9:30 PM CST) and stated it lasted 40 seconds. 13 Either the pilot’s estimate of duration was too high or there was a bright fireball visible for 40 seconds. It seems more than likely that the pilot was mistaken about the elapsed time.

Based on all of this information it seems possible that the estimate by Adams was too high and the true time duration might have fallen into the range for bright fireball meteors with a duration of 10-20 seconds.

Some might point towards the “flashing light” description as a reason to rule out the fireball explanation because it had a constant rate. It was stated in the press that it was a rapidly flashing light. In the Blue Book file, the pilots stated it was an extremely bright light that blinked at an estimated 3 flashes per second but was only visible during the approach and, possibly, after its passage. Fireballs can have multiple bursts in their trajectory. Usually these bursts are the brightest part of the meteor’s path. Some of the meteor videos (12/23/17, 1/29/16, 10/19/13) I linked to showed this kind of effect. It seems possible that several bright bursts could have been interpreted by the crew as a flashing light that went on and off at a constant rate. It is interesting that after the flashing light disappeared he noticed the “port holes” appear and they were fainter. Adams described them as a “soft purple light”. In the fireball scenario, the fireball had multiple bursts with peaks in brightness. After the last burst, the object fragmented into fainter objects that appeared as “port holes”. Some of these fainter objects would then flare out giving the impression the flashing light was still visible.

It was not a meteor!

The last reason that we have to reject the fireball explanation is the statement by Captain Adams that he felt it was not a mete- or. This is a common statement by people who have never seen a long duration bright fragmenting fireball before. They are often only familiar with normal meteors, which look star-like and usually have short durations (although I have seen my share of non-fireball meteors that were visible for many seconds). As an amateur astronomer, I have seen many meteors but not that many bright fireballs. Most of the ones I have seen were during major meteor showers like the Perseids, Geminids, Orionids, and Leonids. While they were spectacular, a sporadic fireball of long duration that is fragmenting is something different. The two that I saw were incredible events that are hard to forget. Both illuminated the sky to the point that shadows were cast and lasted many seconds.

It is interesting the event happened around the spring equinox and during the evening hours. Amateur astronomers have been aware of what has been referred to as the spring fireball radiant for many years.

...in spring, the number of sporadic fireballs climbs by 10 to 30 percent.
“We’ve known about this phenomenon for more than 30 years,” Cooke said. “It’s not only fireballs that are affected. Meteorite falls —

space rocks that actually hit the ground — are more common in spring as well.” 14
Halliday and Griffen noted that the number of meteorite falls were greater around the spring equinox than at other times of the

Additionally, Studies by Rendtel and Knöfel, noted that fireballs were more likely to occur in the evening than in the morning by a factor of four.16 The Stuggart case happened in the evening.

While this information does not prove that the event was a fireball, it does indicate that a fireball was more likely to occur on that date and time than others.

While we can never prove what was seen was a fireball meteor without more data, we cannot eliminate the possibility that a bolide was the source of the sighting. Many aspects of the sighting resemble UFO reports that turned out to be fireballs in the past. As a result, I feel it should be classified as a possible fireball meteor and no longer be placed in the UNIDENTIFIED category.