NASA mission, with help from a UMD physicist, is the first to observe a new type of turbulent magnetic reconnection, providing important clues about heating in the sun's outer layers 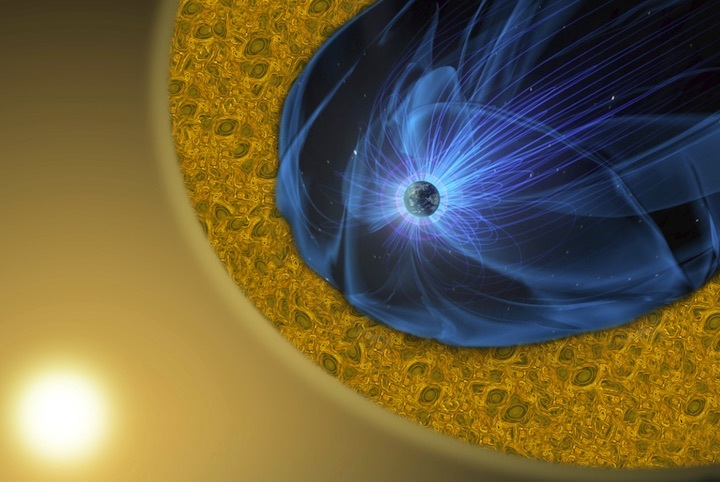 Earth’s magnetic field provides an invisible but crucial barrier that protects Earth from the solar wind—a stream of charged particles launched from the sun’s outer layers. The protective properties of the magnetic field can fail due to a process known as magnetic reconnection, which occurs when two opposing magnetic field lines break and reconnect with each other, dissipating massive amounts of energy and accelerating particles that threaten air traffic and satellite communication systems.

Just outside of Earth’s magnetic field, the solar wind’s onslaught of electrons and ionized gases creates a turbulent maelstrom of magnetic energy known as the magnetosheath. While magnetic reconnection has been well documented closer to Earth, physicists have sought to determine whether reconnection also happens in this turbulent zone.

A new research paper co-authored by James Drake, a University of Maryland Distinguished University Professor of Physics, suggests that the answer to this question is yes. The observations, published in the May 10, 2018 issue of the journal Nature, provide the first evidence of magnetic reconnection occurring at very small spatial scales in the turbulent magnetosheath. However, unlike the reconnection that occurs with the Earth’s magnetic field, which involves electrons as well as ions, turbulent reconnection in the magnetosheath involves electrons alone.

By drawing a clearer picture of the physics of magnetic reconnection, the discovery promises to advance scientists’ understanding of several open questions in solar physics. For example, electron-scale magnetic reconnection may play a role in heating of the solar corona—an expansive layer of charged particles that surrounds the sun and reaches temperatures hundreds of times higher than the sun’s visible surface. This in turn could help explain the physics of the solar wind, as well as the nature of turbulent magnetic systems elsewhere in space.

NASA’s Magnetospheric Multiscale (MMS) mission gathered the data for the analysis. Flying in a pyramid formation with as little as 4.5 miles’ distance between four identical spacecraft, MMS imaged electrons within the pyramid once every 30 milliseconds. These highly precise measurements enabled the researchers to capture turbulent, electron-only magnetic reconnection, a phenomenon not previously observed.

“MMS discovered electron magnetic reconnection, a new process much different from the standard magnetic reconnection that happens in calmer areas around Earth,” said Tai Phan, a senior fellow in the Space Sciences Laboratory at the University of California, Berkeley and the lead author of the paper. “This finding helps scientists understand how turbulent magnetic fields dissipate energy throughout the cosmos.”

But MMS scientists were able to leverage the design of one instrument, the Fast Plasma Investigation, to create a technique that allowed them to read between the lines and gather extra data points to resolve the jets.

“The key event of the paper happens in 45 milliseconds. This would be one data point with the regular data,” said Amy Rager, a graduate student at the Catholic University of America in Washington, D.C., who worked at NASA’s Goddard Space Flight Center to develop the technique. “But instead we can get six to seven data points in that region with this method, allowing us to understand what is happening.”

With the new method, MMS scientists are hopeful they can comb through existing data sets to find more of these events and other unexpected discoveries as well.

“There were some surprises in the data,” Drake said. “Magnetic reconnection occurs when you have two magnetic fields pointing in opposite directions and they annihilate each other. In the present case a large ambient magnetic field survived after annihilation occurred. Honestly, we were surprised that turbulent reconnection at very small scales could occur with this background magnetic field present.”

This release was adapted from text provided by the University of California, Berkeley, and NASA.

The research paper, “Electron Magnetic Reconnection Without Ion Coupling in Earth’s Turbulent Magnetosheath,” Tai Phan et al., was published in the journal Nature on May 10, 2018.