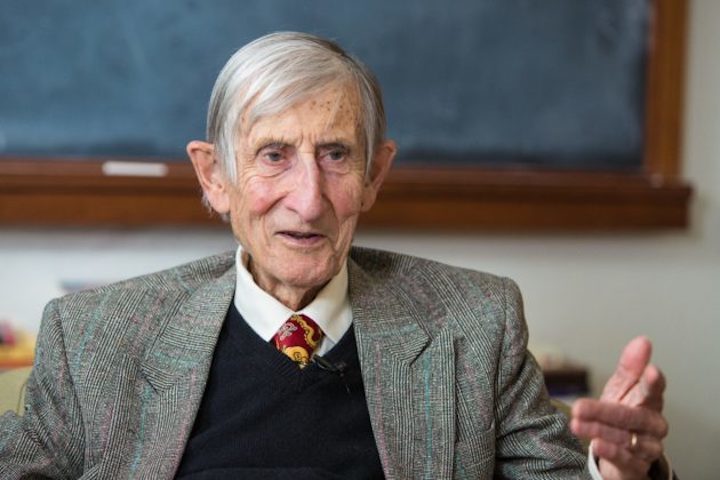 Alien megaspheres … rockets powered by nuclear bombs … freeze-dried life in outer space: These are just some of the ideas that have flowered in the brain of physicist Freeman Dyson, and he’s not done yet.

Dyson, who turned 94 last December, has spent most of his career at the Institute for Advanced Study in Princeton, N.J., and he still hangs his hat there as a professor emeritus. But he also has a connection to the Pacific Northwest: His son, tech historian George Dyson, lives in Bellingham, Wash.

The elder Dyson renews his Northwest connections on Wednesday at a Town Hall Seattle presentation that’s framed as a conversation with Seattle science-fiction author Neal Stephenson and Robbert Dijkgraaf, director of the Institute for Advanced Study.

Topic A is sure to be Freeman Dyson’s newly published autobiography, “Maker of Patterns,” which is based on letters he sent to his family between 1941 and 1978. During those decades, Dyson rubbed elbows with many of the great minds in physics — including Richard Feynman, Niels Bohr, Robert Oppenheimer and Stephen Hawking.

He even crossed paths, literally, with Albert Einstein, who spent the latter years of his life at the Institute for Advanced Study. “We saw him each morning walk from his home to the institute, and each afternoon walk back, but we never spoke to him,” Dyson writes.

Dyson himself made his mark in fields ranging from quantum electrodynamics to nuclear engineering. “Maker of Patterns” sheds light on that scientific work as well as his involvement in the civil rights movement, the anti-war movement and efforts to reduce nuclear arms.

Ironically, the Partial Nuclear Test Ban Treaty killed off one of Dyson’s best-known ideas, Project Orion, which called for setting off atomic bombs to power massive rockets on interplanetary voyages.

“I am really sorry about this,” Dyson wrote in 1963. “But I had to admit in my own mind that no single project of that sort could be allowed to stand in the way of a treaty.”

Another idea attached to Dyson’s name is a concept that came to be known as the Dyson Sphere: In 1960, he suggested that an extraterrestrial civilization could be detected by its infrared signature around its parent star. That suggestion came back into the spotlight a couple of years ago when astronomers speculated that an “alien megastructure” might exist around a weirdly behaving star.

The astronomers eventually ruled out the idea, but Dyson said he was amused by the controversy while it lasted.

“Of course that’s just all rubbish,” he told GeekWire in a telephone interview. “This was basically a misunderstanding of the word ‘biosphere.’ I used the word ‘biosphere’ to mean the habitat in which creatures would be living, and you’d see the warmth outside this habitat. The science-fiction people misunderstood ‘biosphere’ as meaning a big round ball. And of course it doesn’t have to be a ball.”

Dyson is also on record as suggesting that if scientists wanted to look for life on Europa, a moon of Jupiter thought to harbor an ice-covered ocean, the easiest way would be to look for organisms that are splashed into space as the result of cosmic impacts.

The idea of looking for Europa’s “freeze-dried fish” may sound fanciful, but it helped inspire strategies for detecting organic materials within the plumes of water spraying up from Europa or from Enceladus, a similarly ice-covered moon of Saturn.

Dyson warned against overemphasizing the astrobiology angle for space missions.

“I think it’s a big mistake to announce beforehand that a mission is going to search for life,” he said. “That’s almost certainly going to fail. But if you send out a mission to explore what’s there, whether it’s alive or not, it begins to make sense.”

That being said, Dyson’s “latest brainwave” has everything to do with life in space — as in sending out earthly life to take root in outer space.

The concept would make use of what he calls “Noah’s Ark Eggs.” Here’s how he described the idea during our interview:

“The Noah’s Ark Egg is a way of making space colonies highly cost-effective. They’re very cheap, and also very powerful. They’re using miniaturization to spread life in the universe, not just for exploring.

“The Noah’s Ark Egg is an object looking like an ostrich egg, a few kilograms in weight. But instead of having a single bird inside, it has embryos — a whole planet’s worth of species of microbes and animals and plants, each represented by one embryo.

“It’s programmed then to grow into a complete planet’s worth of life. So it will cost only a few million dollars for the egg and the launch, but you could have about 1,000 human beings and all the life support, and all the different kinds of plants and animals for surviving. The cost per person is only a few thousand dollars, and it could enlarge the role of life in the universe at an amazingly fast speed. So you could imagine doing this in 100 years or so.

“We’d need to know more about embryology before we could do it. We’d want to know how to design embryos, and design robot nannies to take care of them until they’re grown up. But all that could be done.”

The idea sounds as if it’d require interstellar travel on the scale seen in the “Interstellar” movie, but Dyson insists that the scheme could work in our own solar system. “There’s lots of real estate in the solar system — of course, most of it is small objects, but there’s plenty of sunlight,” he said.

Dyson is skeptical about the prospects of sending humans beyond the solar system. However, he’s supportive of projects such as the Breakthrough Starshot initiative, which aims to send miniaturized probes flying past the Alpha Centauri star system.

“Getting to Alpha Centauri is really hard, and it’s something we really don’t know how to do,” he said. “But on the way, we’ll get to a huge number of other places which are also interesting.”

Dyson has a lot more to say about different approaches to exploring outer space, which we share in the audio clip below. The way he sees it, the important thing is to keep exploring.

“Space is not empty,” he said. “It’s full of all kinds of interesting stuff.”