Whether underground cave-ins have made the facility unusable is unknown 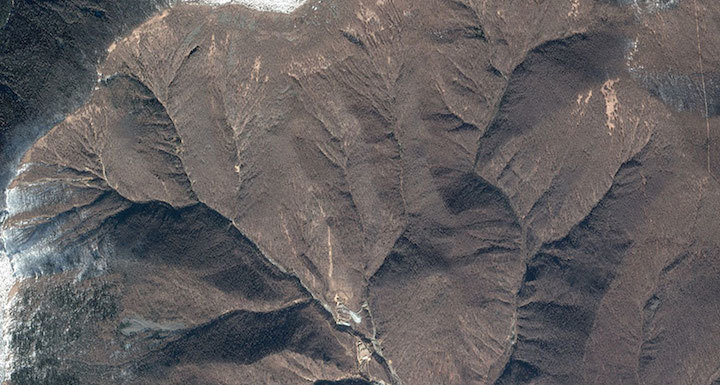 I SPY  Satellite images and seismic data reveal underground cave-ins at North Korea’s nuclear test site, but it’s unclear whether that has put the facility out of action.

A new analysis of satellite images and seismic waves from North Korea’s nuclear test site support theories that the underground facility has at least partially collapsed.

Seismologists across the world have been tracking the clandestine nuclear weapons program for years by analyzing vibrations that emanate from explosions at the test site under Mount Mantap (SN: 8/5/17, p. 18). Now, researchers have paired 3-D satellite images of Mount Mantap with seismic tremor data to simulate how the mountain’s interior might have changed after a hydrogen bomb test on September 3, 2017.

The simulations indicate that the blast — which triggered an earthquake of estimated magnitude 6.3 — caused a cave-in directly above the detonation site, researchers report online May 10 in Science. The simulations also suggest that a second rock collapse, about 700 meters south of the detonation site, caused a smaller quake about eight minutes after the initial explosion.

These rock falls, which caused the face of Mount Mantap to sink about 0.5 meters, could have buried part or all of the underground test facility, rendering it unusable, says study coauthor Teng Wang, a remote sensing and geodesy researcher at the Earth Observatory of Singapore.

The results support another seismic analysis published online April 27 in Geophysical Research Letters suggesting an underground collapse at Mantap. That study led some media to speculate that North Korea didn’t pledge in April to halt nuclear testing because of international pressure, but because the test site could no longer be used.

Ultimately, experts would have to inspect the site to confirm that the Mount Mantap facility is out of order, says study coauthor Douglas Dreger, an earth and planetary scientist at the University of California, Berkeley. “It’s really hard to make that judgment call without having information at that site — getting boots on the ground and investigating it.”