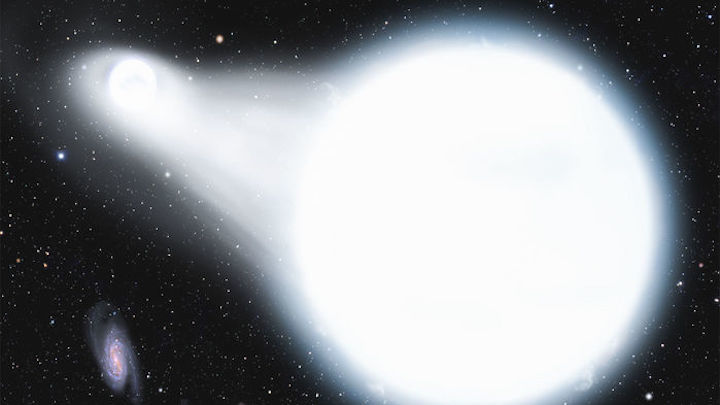 A fast-moving white dwarf star could be the survivor of a supernova that occurs just before the merger of two white dwarfs, depicted here.

Ken Shen was so excited that he woke up before his alarm. At noon on 25 April in Europe—3 a.m. for Shen, an astrophysicist at the University of California, Berkeley—the collaboration behind the European Space Agency’s Gaia satellite released a data set containing the motions, and much more, for 1.3 billion stars. Shen wanted to sift the data set for the fastest moving stars in the sky, which astronomers prize as forensic tools: When rewound, their trajectories point back to the violent events that launched them. Shen knew his team had to move fast to beat the competition. “I’m a theorist,” he says. “Nothing I’ve ever done has mattered on this timescale.”

His eagerness was rewarded. Last week, his team reported the discovery of three white dwarfs—the dying embers of sunlike stars—hurtling through the galaxy at thousands of kilometers per second, perhaps flung out from supernovae explosions. Other groups were also quick off the mark. One reported more than two dozen fast-moving stars, some apparently kicked out by our galaxy’s central black hole; another confirmed that a star blazing through the outskirts of the Milky Way actually hails from another galaxy altogether, the Large Magellanic Cloud (LMC). The flood of discoveries has sent astronomers racing to their telescopes to check and classify the swift objects, says Harvard University astronomer James Guillochon. “It’s hard to know which stars to look at first.”

Astronomers can easily clock a star’s velocity toward or away from Earth by observing the Doppler shift of its light. But measuring sideways motion across the sky, necessary for understanding a star’s actual speed and where it’s headed, was slow and painstaking—until Gaia launched in 2013 and began to measure tiny shifts in the stars’ apparent positions. The new release offers measurements of that sideways motion for all 1.3 billion stars, plus radial velocities for 7 million of the brightest ones.

Shen hoped fast stars could help test a particular theory about type Ia supernovae, the explosions of white dwarf stars. The thermonuclear detonations are triggered when a white dwarf sucks material from a companion star until it is heavy enough to fuse carbon nuclei in its core. But the companion’s identity is hazy. In one scenario, the white dwarf steals material from an ordinary star. In Shen’s favored scenario, a pair of white dwarfs pirouettes together, gathering speed until, just before merging, one of them acquires enough material to explode and the other is released into space like a ball in an Olympic hammer throw.

To look for these survivors, Shen’s team picked through the Gaia survey for stars with the highest sideways motion. Then they checked these candidates with ground-based telescopes in California, the Canary Islands, and South Africa to classify their stellar types and get their missing radial velocities. Within 24 hours, Shen’s team found three white dwarfs that might fit the bill. One moves at 2400 kilometers per second, putting it among the fastest objects in the galaxy, the team reported on 30 April in a paper posted to the preprint repository arXiv.

Astronomers have discovered dozens of stars that move so fast they are not bound by the Milky Way’s gravity. Some are likely to hail from other galaxies. One, a white dwarf, can be traced back to a supernova explosion.

The team also rewound the paths of these stars 100,000 years in time. One traces back to a nearby supernova remnant, the debris cloud from a previous explosion, deepening the link. “This is a great result, observationally,” says astrophysicist Kris Stanek at The Ohio State University in Columbus. Theorists still need more time to consider Shen’s scenario, he says, but the white dwarf “probably is a part of a supernova explosion.”

Another team led by Tommaso Marchetti at Leiden University in the Netherlands searched Gaia data for fast-moving stars that testify to another kind of galactic violence. On 27 April, they reported on arXiv that they had found 28 of them, some speeding away from the galactic center, where a giant black hole lurks. In theory, the powerful gravity of this black hole can disrupt binary star systems that stray too close, sending one star rocketing away at about 1000 kilometers per second, fast enough to escape the galaxy’s own gravitational pull.

Two of Marchetti’s stars, however, trace back to outside the galaxy, perhaps to the LMC. Another star, called HVS3, provides an even clearer case. It was discovered in 2005, suspiciously close to the LMC, in the halo of the Milky Way. Gaia data show that HVS3 hails from the heart of the LMC, argues a team led by astronomer Denis Erkal at the University of Surrey in the United Kingdom in a 26 April arXiv paper. It’s traveling so fast that it, too, may have gotten its kick from a central black hole—a previously undetected one belonging to the LMC.

“That’s big,” says Douglas Boubert, a Ph.D. student at the University of Cambridge in the United Kingdom who helped hunt down Gaia’s high-speed stars for Erkal, Shen, and Guillochon. Astronomers know that all large galaxies host big black holes, but it isn’t clear how many small galaxies like the LMC do. Finding more objects ejected from the LMC would help weigh that black hole, and perhaps confirm Boubert’s driving suspicion: that a sizable fraction of the Milky Way’s speedsters “are coming from a different galaxy entirely,” he says. “Who knows if I’m right.”