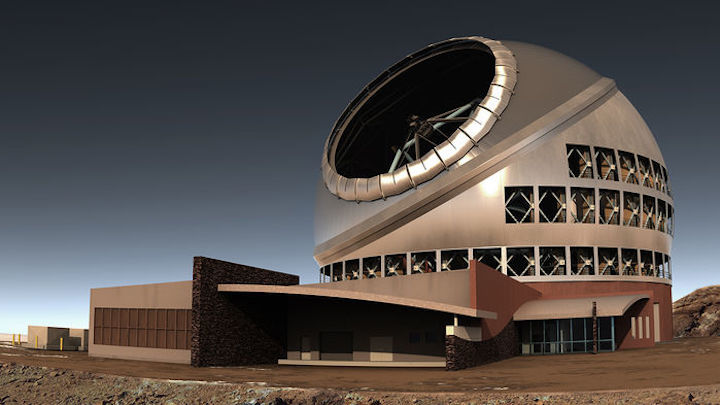 Two planned giant telescopes may soon get a boost from Congress.

Representative John Culberson (R–TX), who chairs a U.S. House of Representatives spending panel that sets funding levels for the National Science Foundation (NSF), is hinting that he wants NSF to get behind both the Thirty Meter Telescope (TMT), a $1.4 billion facility proposed for Mauna Kea in Hawaii, and the Giant Magellan Telescope (GMT), a 25-meter telescope already under construction in the Atacama Desert in northern Chile.

The first step could come Thursday, when the full House appropriations committee is expected to take up Culberson’s $62 billion spending bill covering NSF and several other federal science agencies.

Although details of that bill have not been made public, Culberson seems eager to provide a down payment for a significant NSF investment in at least one of the billion-dollar telescope projects by using the agency’s new construction account. “I’m keenly interested in seeing NSF begin to participate in the 30-meter telescope in Chile,” Culberson told ScienceInsider after his subcommittee unanimously approved the spending bill on 9 May.

Culberson’s remark is hard to parse because the TMT is planned for Hawaii, not Chile, and because it leaves unclear whether he meant support for one or both projects. But the lawmaker’s interest in promoting a ground-based astronomy project identified as a high priority by the scientific community is well known. In 2010 a panel of the U.S. National Academies of Sciences, Engineering, and Medicine (NASEM) ranked a giant segmented mirror telescope as its third highest priority for land-based astronomy in the coming decade. And the TMT and GMT are the two U.S.-led projects that fit that description (although the decadal report also discussed plans by the European Southern Observatory to build a 39-meter European Extremely Large Telescope, now under construction in Chile).

Although the NASEM decadal report suggested NSF put up roughly one-quarter of the cost of one of the two U.S.-led projects, NSF has long pleaded poverty. To date, its only direct support for either telescope has been a $1 million planning grant to the TMT, a 5-year award that expires at the end of this year.

The likely mechanism for sustained NSF funding would be through the agency’s Major Research Equipment and Facilities Construction (MREFC) account. Culberson’s bill calls for nearly tripling the size of that account in 2019, to $268 million. The account is now supporting two other telescopes being built in Hawaii—the Daniel K. Inouye Solar Telescope and the Large Synoptic Survey Telescope—but the solar telescope is expected to be completed next year.

NSF is also using the agency-wide account to finance construction of three medium-size research ships. Culberson suggested that his proposed infrastructure increase would also be a boon for that project, which has traditionally been championed by the Senate over the opposition of his panel. “I’m doing my best to augment the NSF fleet, which does great work,” he told ScienceInsider after the markup. “Universities around the country depend on those ships, and I want to make sure NSF has the resources it needs.”

The TMT has been delayed because of local protests and lawsuits. Native Hawaiian groups have objected to placing the facility atop the Mauna Kea volcano, which already hosts several other telescopes, saying it represents an inappropriate use of sacred land. Protesters have blockaded roads to the site, and several lawsuits against the TMT are still in process. Although TMT backers have won a number of rulings, planners are still uncertain whether they will be able to build the telescope in Hawaii, and are considering an alternate location in the Canary Islands.

The GMT appears to have a clearer path to completion. The dozen-member consortium began construction of the GMT in 2015 and hopes to begin operations in 2023.

Overall, the 2019 House spending bill from the commerce, justice, and science panel would raise NSF’s overall budget by 5.3%, to $8.2 billion. Included in that total is a 5% ($317 million) hike in its $6.3 billion research account. NSF’s budget request also contains $104 million to begin a $350 million Antarctic modernization project and $60 million to launch a midsize research facilities program across several disciplines. But some NSF watchers feel that the MREFC account might be a better home for those projects, leading to speculation that they might receive some of the proposed growth in the account.

The Senate has yet to release its version of the NSF funding legislation. Ultimately, the House and Senate measures will have to be reconciled into a single bill.