On the evening of February 6th, Elon Musk’s Space X launched its new Falcon Heavy rocket. In order to demonstrate the rocket’s power, he chose to send a Tesla Roadster into solar orbit. The main boosters had put the rocket into high earth orbit but an up- per stage was needed to send the Roadster away from Earth’s gravitational pull. The upper stage burn happened around 0224 UTC on the 7th and it was visible from the western part of the United states. Luckily, the weather was clear enough for amateur astrono- mers to record the event but there were also quite a few people, who saw the display, that reported the event to UFO organizations.

What was seen was a bright object surrounded by a cloud that appeared low in the southwestern sky and proceeded southeast- ward. It then evolved into a comet like object with twin tails. This cloud then expanded and dissipated. While the southwest- ern US was favored, there were reports of it being seen as far north as southern Oregon, Idaho, and Colorado. Estimates puts its altitude at about 600 miles at the time of the burn and it paralleled the Mexican coastline. I wonder how many videos of this event will be promoted by Jaimie Maussan?

The reports and time errors

MUFON has an interesting tracking feature these days where they plot the sightings on that date on a map. 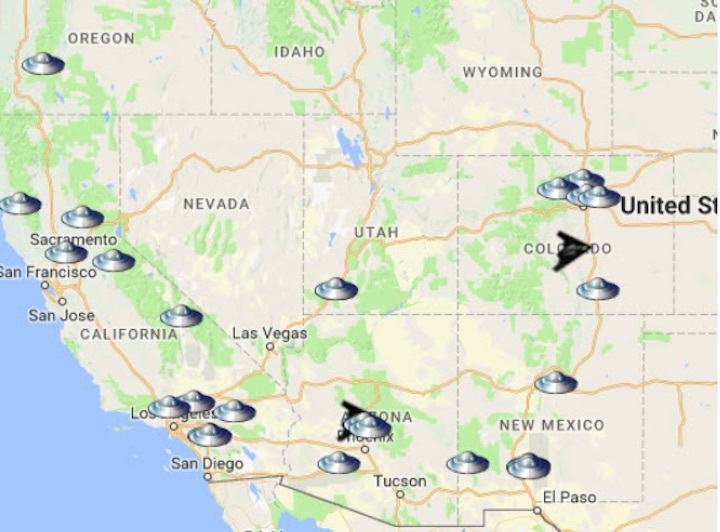 The descriptions given by some were reasonably accurate. Some mentioned the object moved at “extreme speed” and others stated they had seen the object as a shape, like a triangle, instead of a star-like center. Probably the most interesting problem I noticed was the spread of times. Like my examination of fireball reports, observers usually have a margin of error in the times they report. In some cases, it appears the data was entered incorrectly. For instance, the Butte Falls, Oregon sighting was reported as 9:20 PM but the description matches the reports indicating the witness just probably made an error in the data entry. Others erroneous- ly entered the time as AM instead of PM. The actual time, as recorded by amateur astronomers in New Mexico, was between 2:24 and 2:33 UTC (6:24-6:33 PM CST/7:24-7:33 PM MST)

The time problem appeared in the NUFORC database as well.2 Once again, there were entries that were apparently erroneously recorded. Other times fell outside the range of 2:15-2:40UTC. Out of the 15 entries, three were erroneously entered and two others fell outside the expected time range. This agrees with the ranges in the MUFON data. Including the apparent erroneous entries, the accuracy was about 67%. 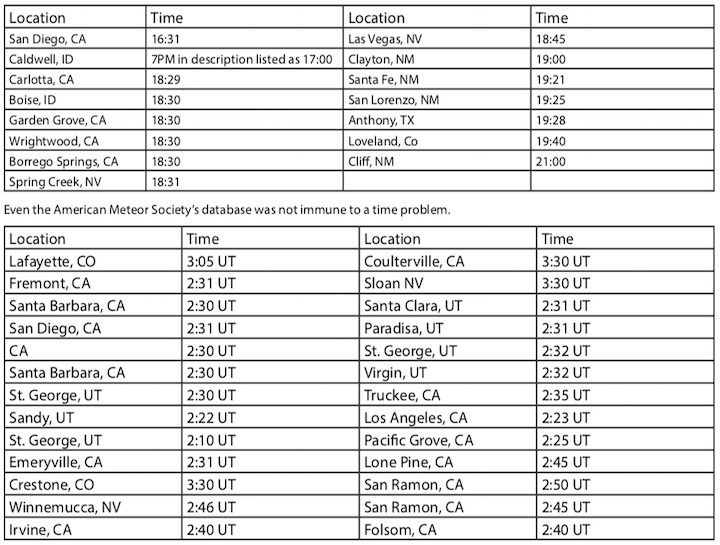 Out of 46 reports, nine had the time wrong. This indicates that roughly 80% of the reports had a time that was pretty correct.

What the data demonstrates is that the time recorded for an event has the potential for being in error by minutes, and possibly, an hour or more. This is important when trying to identify a potential source of the sighting. If a bright fireball was visible but the witness gives a time that is an hour off, that does not mean that what they saw was not that fireball. The same can be said for sightings that might the ISS, a bright satellite, airplanes, or rocket launches. One must continue to remember that human beings are recording this information and, because they are human, they can, and do, make errors.