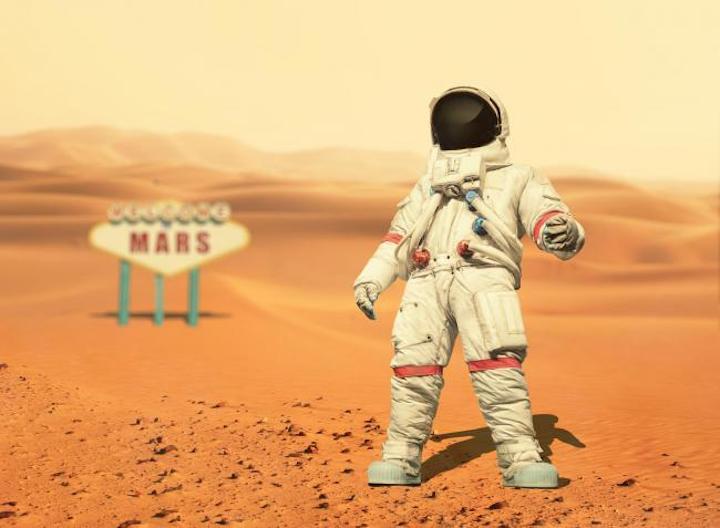 IT SEEMS no matter how big a rocket you have, insecurities surface when fresh-faced young thrusters start sniffing around your territory. The high heid yins at Nasa certainly showed evidence of increased sensitivity this week when they blasted Elon Musk – huffily dismissing the billionaire engineer’s new rocket as “too small”.

These cash-rich upstarts lean heavily upon showmanship and razzle-dazzle, willingly inviting hyperbolic headlines and hysterical levels of hype for what are essentially just minor test launches.

Many casual observers are under the impression we’ll soon be living in Martian cities and canoodling with exotic aliens, but the fact remains that no-one in the aeronautics industry is anywhere near launching a manned flight to Mars – never mind colonising the red planet with casinos and coffee shops. It’s a very long way off – yet, these firms have to keep the near-future dream alive so investors think they’ll walk on Mars in their lifetime.

Where Musk and Bezos’ firms do excel, however, is in making innovative breakthroughs in propulsion technology at a rate the red-tape bound bureaucratic nightmare that is Nasa just can’t match. The new space race took a dramatic turn earlier this year when SpaceX launched the “Falcon Heavy” – a rocket boasting recyclable boosters which return to Earth at exactly the same spot where they blasted off.

This was showmanship worthy of Hugh Jackman in a cape, a planet-pausing Kodak moment where a rocket launch itself wasn’t even the pièce de résistance. That would have been the car being ejaculated into infinity from the top of Musk’s rocket. The Stig seemed to be driving and Life On Mars was on the stereo. Not that anyone could hear Bowie in space’s vacuum – nor would any aliens be familiar with Top Gear. Still, it’s the thought that counts.

Before you think that sounds like a pretty slick and exciting name for a Nasa creation, be aware that it’s simply an accidentally funky acronym for the typically conservative and dull ‘Space Launch System’. Sorry, nodded off on the space bar there.

Keen to avoid such stuffy officialdom with his forthcoming SpaceX project – which aims to render the SLS redundant – Musk has allowed punk puerility to take centre stage and named his wildly ambitious work-in progress the “BFR”.

The B and R stand for for Big Rocket, but the F in the middle certainly doesn’t mean Friendly. Or even Flaming. The side-shedded establishment at Boeing and Nasa must be slack-jawed at Musk’s audacity – and envious of his ability to get away with borrowing the name of videogame Doom’s superweapon “Big F*****g Gun” for a project of such significant cultural importance.

Predictably, Nasa has vented its frustrations the way most folk do these days – by being passive aggressive on the internet. Without even mentioning Musk’s “Big F****** Rocket”, it wrote on Watch U.S. Fly: “The Falcon Heavy launch turned heads in February, but SpaceX’s rocket is a smaller type of rocket that can’t meet Nasa’s deep-space needs. Our SLS can bring equipment into space that is too large for the Falcon Heavy.”

It fails to mention the Big F*****g Rocket could possibly take the SLS into orbit as hand luggage.

It then seems like Nasa’s main benefactor, President Trump, command-eered the keyboard to pen the remainder of Watch U.S. Fly’s mission statement. An unsettingly bizarre, boastful ramble offers up several sexually charged reasons why the SLS is the “best rocket”. Apparently it’s the “world’s largest”, “most powerful”, “American-made” (not sure the Challenger shuttle victims would see this as a positive) and, also, “flexible”.

Propulsion engineers will perhaps know better than me if this is such a good idea. Maybe the concept of morphing into a boomerang is a cheap way of getting home.

A RICH UNIVERSE FOR THE ELITE TO EXPLORE

FORGET going boldly forth to explore strange new worlds. Or even good old-fashioned Cold War competitive rivalry. Capitalist hegemony alone is the prime motivator for SpaceX, Blue Origin and Nasa’s attempts at building rockets capable of carrying serious cargo to the moon and Mars. To misquote Lou Reed, soon both will be filled with Tesla cars.

Space tourism – initially costing £250,000 just to enter orbit for a few minutes – moon hotels, mineral drilling and Martian colonies will certainly prove lucrative endeavours for Musk and Bezos. Yet, despite their grotesque wealth and cultural dominance, it’s securing a place in history that matters most to both. And this will solely depend on whomever is credited with landing the first human on Mars.

Such a seismic achievement will also earn the victor financial dominance over the solar system as the world’s space agencies – not just Nasa, but China and Russia – compete for cargo space on flights to the red planet and beyond.

There has certainly been speculation and doubt concerning SpaceX’s ability to deliver on its ambitions to colonise Mars by the 2020s, but Nasa’s long-term plans to return to the moon and build new lunar space stations are almost certainly pie in the sky. Like someone sneaking a Fray Bentos onto the International Space Station.

Nasa’s unexciting SLS rocket is based on decades-old tech, simply recycled ideas that stretch way back to the Apollo missions.

The project has been plagued by lengthy delays and the rocket’s single-use, non-recyclable boosters are a hideously expensive and wasteful hangover from a bygone era. It’s also still years away from being ready for a maiden test flight. The bigger they come, the harder they fall it seems.

Lex Luthor, currently operating under the name Jeff Bezos, is the dark horse in the race to get a human on Mars – but the Amazon überlord remains the thinking man’s favourite to get there first. He’s certainly someone with the obsessive focus and energy to get things done – whether it’s becoming the world’s first trillionaire or getting Inverclyde Council to build a new road for his factory.

The world’s richest man’s “New Glenn” rocket (confusing, seeing as there was no old Glenn) is fully recyclable and impressively lands back on terra firma in a proud upright position.

Its nimbleness and cost-effectiveness make it more of a direct competitor for SpaceX. Bezos’ current “Shepard” rocket is designed to take adventurous tourists on suborbital flights to the edge of space – but be sure that is just the beginning for someone who started off his empire selling a few second-hand copies of Harry Potter on the internet.

Bezos has virtually unlimited assets to devote to Blue Origin, recently stating he would fund space exploration through the sale of his Amazon stock. As he accepted the Buzz Aldrin Space Exploration Award last month, he said: “The price of admission to space is very high. “I’m in the process of converting my Amazon lottery winnings into a much lower price of admission so we can go explore the solar system.”

It’s clear the final frontier for capitalism is the monetisation of space – and it’s a war that won’t be fought between countries, but billionaires’ pet projects. Last year alone, investment in space start-ups by venture capitalists reached a record $2.8 billion.

While it’s near certain that the US will be the first nation to put humans on Mars, it’s also clear that such huge ambitions can only now be fulfilled by the super rich – splurging lucre from the gross excesses of rampant capitalism to gratify their egos. It seems all such seismic societal achievements in space will now always be strictly business. “Assessing soil consistencies for potential mineral extraction” just doesn’t have the same ring as “coming in peace for all mankind”.

MEET THE MAN WHO OWNS THE MOON

The answer is, of course, no-one. Ancient cosmic collisions and gravity just isn’t a sexy enough solution for some folk. David and Noel would be better off asking a far more pertinent question, one suited to an era where our species can credibly consider migration to other heavenly bodies: who owns the moon?

Well, an ex-car salesman called Dennis Hope owns the moon. No, really. He’s already made around £6 million by selling plots of lunar landscape (and, notably, full mineral mining rights) to folk who fancy a bit of a punt.

Hope claims he has exploited a loophole in the 1967 United Nations Outer Space Treaty – which states no nation can claim ownership of any landmass outside of the Earth. This long-forgotten but now increasingly relevant document, however, makes no mention of individuals who may seek to claim ownership. Nor does it mention anything stopping them.

So by simply writing to the UN to lay claim to the moon as a private American citizen – and cheekily bagging a few other planets in the solar system (and their moons, of course) at the same time – Hope’s company Lunar Embassies claims the UN’s lack of response now entitles him to full ownership.

Customers Clint Eastwood, George Lucas and Tom Hanks are certainly hoping it does. A few ex-Presidents including Bush Junior also own some of Hope’s lunar land deeds. A crazy investment? Well, Tom Cruise is also in on the action and he’s certainly not mad.

If Lunar Embassies still doesn’t ring true as a credible investment opportunity, then note that top-tier hotel conglomerates such as Hilton and Marriott have also believed it worthy of a flutter.

Unsurprisingly, Hope has previously fallen foul of the law on several occasions. He admitted: “I’ve been taken to court in Germany and Sweden for fraud but both cases were thrown out of court because of lack of jurisdiction. No court wants to tackle this issue yet.”

Disney should perhaps note that Hope currently has the entire planet of Pluto for sale at just $250,000. Pocket money for a planetary theme park that could revive the cartoon dog’s career.

Still doubtful? Lunar Embassies bats away accusations of being a morally bankrupt, snake-oil touting capitalist aberration by having a social conscience. Hope claims he once turned down hundreds of millions of dollars – simply because it was an offer for the moon’s polar regions.

“That’s where the frozen water is and they’re not for sale,” the moon’s owner said. “Any company that owned it would have a monopoly on the water supply and they would exploit it.” It takes a thief to catch a thief, as they say.