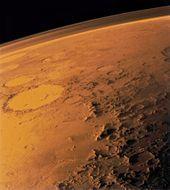 "This study offers a simple and more elegant solution for why Mars is small, barren and uninhabitable," said Matthew S. Clement, OU graduate student in the Homer L. Dodge Department of Physics and Astronomy, OU College of Arts and Sciences. "The particular dynamics of the instability between the giant planets kept Mars from growing to an Earth-mass planet."

Clement and Nathan A. Kaib, OU astrophysics professor, worked with Sean N. Raymond, the University of Bordeaux, France, and Kevin J. Walsh, Southwest Research Institute, to investigate the effect of the Nice Model instability on the process of terrestrial planetary formation. The research team used computing resources provided by the OU Supercomputing Center for Education and Research and the Blue Waters sustained peta-scale computing project to perform 800 computer simulations of this scenario.

The goal of this study was to investigate simulated systems that produced Earth-like planets with Mars analogs as well. Recent geological data from Mars and Earth indicates that Mars' formation period was about 10 times shorter than Earth's, which has led to the idea that Mars was left behind as a 'stranded planetary embryo' during the formation of the Sun's inner planets. The early planet instability modeled in this study provides a natural explanation for how Mars emerged from the process of planet formation as a 'stranded embryo.'

The success of the terrestrial planetary formation simulations for this study were found to be tied to the detailed evolution of the solar system's two giant planets--Jupiter and Saturn. Systems in the study where Jupiter and Saturn's post-instability orbits were most similar to their actual current orbits also produced systems of terrestrial planets that resembled the current solar system.