Section III does not provide much. It is part of a table with the following comment:

The source of the information comes from USAF intelligence reports. However, there is no follow-up on the sighting. It is just a listing of a case.

While the source listed in the UFO evidence indicates it came from USAF files, the Blue

3
Book file contains a bit more information than this . The light was first seen passing un-

The time of the event was at 0913Z, which leads us to the possible source of this sighting. Blue Book indicated a balloon was re- leased from Spokane at 0900Z and reported winds from 270 to 280 degrees around 10,000 feet. The data sheet they provided for this balloon is hard to read and indicated the winds below 1000m were from the WSW. There is no other data beyond the first two minutes of ascension.

The NOAA ESRL Database has records for two other weather balloons, which were launched at 0300Z and 1500Z4:

The 722m reading was the ground level for the airport. The winds appeared to be shifting from the southwest to the northwest between 0300 and 1500Z. This indicates that the direction given by Blue Book was probably accurate. The 1500Z balloon indicates it is possible the 0900Z balloon might have encountered winds from the northwest at some point.

Blue Book attempted to make the calculations to explain how the balloon made it to the location listed in the report. However, they made several errors. The biggest was using the wind values for 10,000 feet to measure the distance the balloon traveled. While the winds at 10,000 feet (3000m) were probably at 50 knots (the 1500Z reading was 48), the balloon was not propelled by these winds the entire time it was airborne. It probably was only 3-10 NM to the ESE of the airport.

All the other reports list this longitude and latitude as the location of the sighting. What the report actually meant was the plane turned south towards Rosalia (which was located at 47 deg 20’N, 117 deg 30’W) but the UFO disappeared. The actual approximate location was more towards the north and closer to the airfield. If we use the 10 nautical miles from the Spokane radio (located just south of Felts Field east of downtown Spokane) and the actual airway the plane was located upon (001 degree magnetic heading), the plane’s location was about halfway between Cheney and Valleyford, WA (about 47 deg 30’ N,117 deg 20’ W ). This is about 11 nm Southeast of the location where the balloon had been launched (See diagram on next page).6

Could the balloon have reached that location? It is difficult to say but there are factors that could have allowed it to reach the loca- tion and altitude where the B-36 was located. The balloon could have had a slower ascent rate than expected. It could also have been launched five minutes earlier or encountered winds a bit faster than expected. The balloon could also have deviated towards the southeast at some point. The 1500Z wind readings support a southeast course at 1500 meters. Additionally, we are not sure if the exact time of the event was precisely at 0913Z. Could it have been 0914 or 0915Z? These are variables that have to be consid- 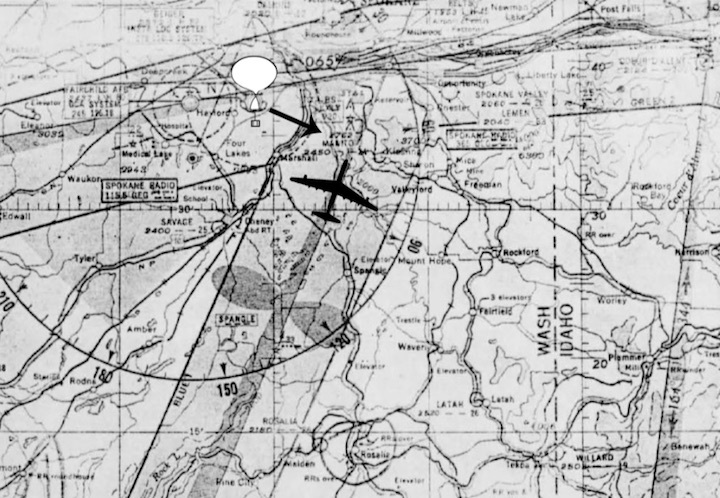 The observed effects of the light circling after the B-36 passed probably had to do with the turbulence of the aircraft causing the balloon to oscillate in the eddy currents of the aircraft’s wake. According to the Blue Book record, there was a cloud deck at 9000 feet. The B-36 made its turn and probably saw the balloon for a short period of time and it then rose into the clouds. It had myste- riously disappeared.

All of the effects observed indicates the flashing light behaved like a balloon and there are records a balloon was in the area. There is no reason to discount this as a probable balloon sighting. The case should be classified as a probable balloon. Because of this solution, this sighting should not be considered Best Evidence.