"We need to recognize that we can no longer operate in the somewhat static 'spy vs spy' conditions of the Cold War and that we are dealing with a technologically advanced and ever-adapting adversary who has both the know-how and funding to continually push us on every front," former Pentagon official Doug Loverro said. 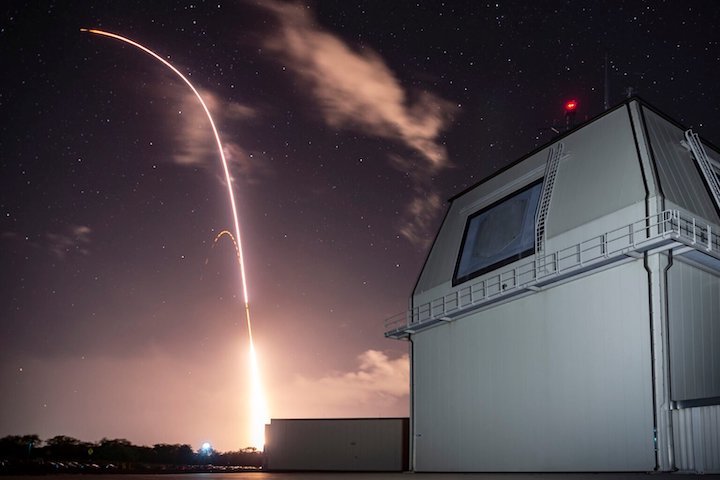 WASHINGTON: When news broke this week that China tested, over the summer, what appears to be a Fractional Orbital Bombardment System (FOBS), a bevy of military officials and lawmakers raced to warn that the weapons test is the latest in a series of provocative arms race moves from Beijing.

FOBS technology is not new, although China’s alleged use of a nuclear-capable hypersonic glide vehicle (HGV) as the pointy end of the stick would be a twist. The Soviets deployed a FOBS — which combines a low-flying missile and nuclear warhead that reaches Low Earth Orbit, but does not remain in space for a full turn about the Earth — from 1969 to 1983. China began an effort in the early 1970s, but suffered test failures with its launcher, and gave up.

So why pick the capability — if that is what was launched — back up now? The answer, analysts say, is fairly simple: if FOBS can be made to work, it could serve as something of a trump card in a series of both technological and geopolitical cat and mouse moves between Beijing’s long-range missile capabilities and America’s missile defense technologies.

“This is an old concept that is newly relevant as a way to defeat missile defenses,” Jeffrey Lewis, an expert on Chinese nuclear weapons at Monterrey Institute’s James Martin Center for Nonproliferation Studies (CNS), noted in a recent tweet.

Doug Loverro, former head of space policy at the Defense Department, told Breaking Defense, “I think the real message here is that we need to both rethink the way we intend to conduct missile defense, and we need to understand that the Chinese are going to continually work to exploit unanticipated holes in our missile warning and defense systems to a far greater degree than occurred during the Cold War.

“We need to recognize that we can no longer operate in the somewhat static ‘spy vs spy’ conditions of the Cold War and that we are dealing with a technologically advanced and ever-adapting adversary who has both the know-how and funding to continually push us on every front,” Loverro added.

The Geopolitics Of Missile Defense

China, like Russia, has publicly railed against US missile defenses since their inception by President Ronald Reagan. More recently, Chinese analysts have lashed out at the enlarged footprint of US missile defenses via the Aegis Ashore efforts, including in Japan, notes Tong Zhao, a researcher at the Carnegie–Tsinghua Center for Global Policy in Beijing.

“Some Chinese analysts have advanced a series of claims that, by encircling China with a ‘chain of missile defense,’ the United States seeks to establish ‘absolute security,’ attain military hegemony, and/or undermine ‘China’s peaceful rise’,” he wrote in a study last year, “Narrowing the US-China Gap on Missile Defenses.”

Chinese leaders also are concerned, Zhao said, by the expanding US concept of missile defense and now missile defeat, which would see the US using long-range, hypersonic weapons to take out launchers before they can be used. (The US much-touted strategic pivot to the Indo-Pacific no doubt feeds these concerns that Washington is determined not to let China take what it sees as its rightful place as a major world power.)

US leaders long have dismissed as political theater missile defense concerns from China and Russia. This is especially true regarding their assertions that US missile defenses are secretly doing double-duty as anti-satellite weapons to prevent other nations from using space for the same power-projecting purposes as the US, which US officials in turn have characterized as aimed at restricting US military space capabilities while Moscow and Beijing pursue their own.

Instead, Washington has consistently said that its missile defenses are not aimed at China, but rather at “rogue” nations such as North Korea and Iran. For example, the 2017 National Security Strategy states that “Enhanced missile defense is not intended to undermine strategic stability or disrupt longstanding strategic relationships with Russia or China.”

But the Trump administration’s rhetoric then and its subsequent 2019 Missile Defense Review told a different story. The Missile Defense Review, in particular “walked back those assurances, stating the system would also defend against Russia, China and grow to cope with HGVs and advanced cruise missiles *at intercontinental ranges* — things North Korea, Iran do not possess,” Lewis tweeted.

Leaders in Beijing, of course, are convinced (and given Japanese statements about its rationale one really can’t blame them) that US missile defense policy in the Pacific was aimed squarely at containing China. But Zhao raises questions about the sincerity of China’s public concerns about US missile defenses, noting that they remain vague on the details.

“Expressed Chinese views send a confusing message about why, and to what extent, U.S. missile defense capabilities imperil Chinese interests,” he wrote. For one thing, “China has lumped its concerns about its long-range nuclear deterrent together with a wide range of other nuclear and non-nuclear security interests that it believes U.S. missile defense undermines, a conflation that obscures actual key Chinese concerns.”

Further, other Chinese actions — from its installation-building in the South China Sea to its efforts to corral the market on strategic technologies like 5G by hook or by crook, to its rampant use of social media to undercut US democracy — play into US concerns about a potential FOBS and/or hypersonic weapons, Todd Harrison, head of the Aerospace Security Project at the Center for Strategic and International Studies, told Breaking Defense.

“What China has been doing around Taiwan, provoking Taiwan with intrusions in its airspace, combined with China’s other belligerency in the trade wars and things like that have gotten everyone to the point where they’re super suspicious of anything China does,” he said. “I do put part of the blame here on China for the way it’s been behaving. That is driving people to be hyper-suspicious.”

In A World Of ICBMs, Does FOBS Change The Security Calculus?

From America’s viewpoint, a Chinese FOBS-like arsenal — whatever de-orbiting technology involved, be it simple re-entry vehicles using gravity or faster moving HGVs — could be seen as a first-strike weapon for the People’s Liberation Army, especially when viewed in light of China’s rapid build up of its own ICBM fleet. (Although that is also true for a suborbital nuclear hypersonic glide vehicle.)

“If the reports on the Chinese weapon are accurate, then the potential weapon is quite concerning both militarily and legally,” Loverro said, noting that it “skirts the limits” of the 1967 Outer Space Treaty that bars nukes in space. (The legal issue, however, is yet another case of how many angels can dance on the head of a pin.)

Because a FOBS with a hypersonic glider would not actually be stationed in space, rather popped up at the moment an attack decision is made, US officials and lawmakers fret it represents a much more complicated threat to the US homelandthan the abandoned Soviet FOBS program, which used a maneuvering re-entry vehicle powered by thruster engines.

“It’s very disturbing,” Loverro said, even as a number of non-government nuclear scientists and experts beg to differ.

“FOBS doesn’t make sense,” Pavel Podvig, a senior research fellow at the United Nations Institute for Disarmament Research in Geneva, Switzerland wrote. “If the idea is to penetrate missile defense, FOBS is not necessarily a good way to do that.” This is because due to weight constraints, a space-faring vehicle can carry fewer warheads than an ICBM, which can be equipped with a lot of Multiple Independent Re-entry Vehicles, or MIRVs — not to mention decoys, chaff and flares — to confuse missile defense radar.

Many analysts stressed that today’s fleet of US ground- and ship-launched interceptors already can’t overcome China’s small arsenal of some 100 ICBMs — much less the much larger arsenal of Russian nukes. Remember, according to US policy and law the missile defense architecture is optimized against tiny arsenals of rogue states.

“This is not a game changer,” astrophysicist and anti-nuclear weapons activist Laura Grego of the Union of Concerned Scientists, commented on the possibility of a Chinese FOBS using an HGV. “US BMD is not designed to counter China’s existing missiles,” she wrote in a Twitter thread on Sunday.

“The US is already inescapably vulnerable to Chinese ICBMs,” James Acton, a physicist and arms control advocate at the Carnegie Endowment for International Peace, similarly tweeted.

In the end, Acton pointed out, a nuclear weapon is a nuclear weapon, with the same results — a lot of dead people. “Finally, if China is building G-FOBS, does it matter? As someone who lives within the 5psi blast radius of a large nuclear detonation over the Pentagon, I say no…,” he wrote.

One the other hand, if a Chinese FOBS is “yet another step in a pointless, costly and dangerous arms race” between China and the US, as Lewis argued in Foreign Policy, it matters a lot.

A tendency for both sides to assume the worst intentions of each other, along with over-estimations of each other’s capabilities, is hardly new; the phenomenon, known as “mirror imaging,” was a well-known feature of the Cold War. Given some of the reactions to this week’s report, as well as prior warnings from top defense officials about Chinese hypersonic and space-based capabilities, some wonder whether that Cold War mentality is back in vogue.

As Aaron Bateman, a scholar specializing in space policy at John Hopkins University, put it in a Twitter thread this week, the history regarding the Soviet pursuit of FOBS and US reaction is a cautionary tale. “Historical context on the US reaction to Soviet FOBS and why it matters: in short, public hysteria can lead to overreaction by political leaders.”