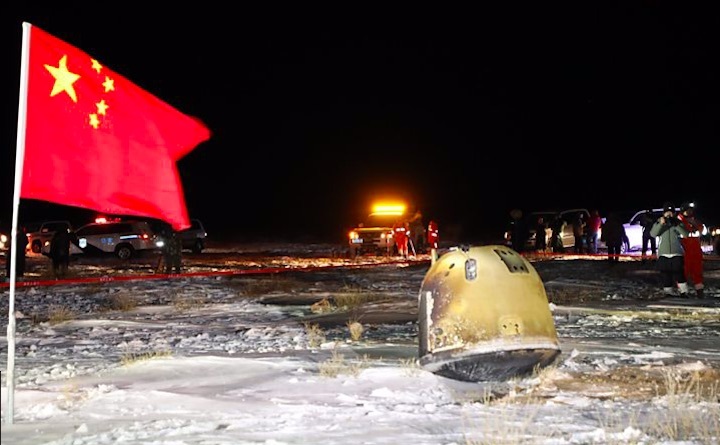 An analysis of moon rocks brought back to Earth by China's Chang'e-5 mission suggests the samples are a new type of lunar basalt, different from those collected during previous Apollo and Luna missions.

Researchers from the National Astronomical Observatories of the Chinese Academy of Sciences (NAOC) analyzed rock particles 10 to 500 microns (a quarter the thickness of a credit card) in size, and discovered that their characteristics were mainly those of basalt. But unlike the magnesium and iron-rich basalt found on Earth, lunar basalt is low in magnesium and high in iron oxide.

The results were published in the journal Nature on Tuesday.

"This could represent a new class of basalt," said Li Chunlai, the lead author of the article and a researcher at the NAOC, adding that the newly identified basalt is different from samples collected during previous lunar missions, which could lead to a better understanding of lunar volcanic activities.

Lunar samples from the Apollo and Luna missions carried out decades ago by the United States and the former Soviet Union have provided insight into the moon's history and evolution, but their sampling sites are located in a low-latitude region that cannot represent the most widespread lunar surface features, Li noted.

China's Chang'e-5 mission, however, will help rectify the lack of diverse sampling areas as it has -- for the first time in history -- taken lunar soil from the mid-latitude region of the moon, a dark and flat region dubbed the "Ocean of Storms." Scientists believe it is very likely to have preserved evidence of the earliest lunar volcanic activity.

"These samples will open an epoch-making window for the study of lunar science," said Li, who also stressed that the new study would provide basic information for subsequent scientific research.

The Chang'e-5 probe returned to Earth on Dec. 17, 2020, having retrieved a total of 1,731 grams of lunar samples, mainly rocks and soil from the moon's surface. China National Space Administration delivered approximately 17 grams of samples to 13 institutions, which had each applied for research programs. Enditem 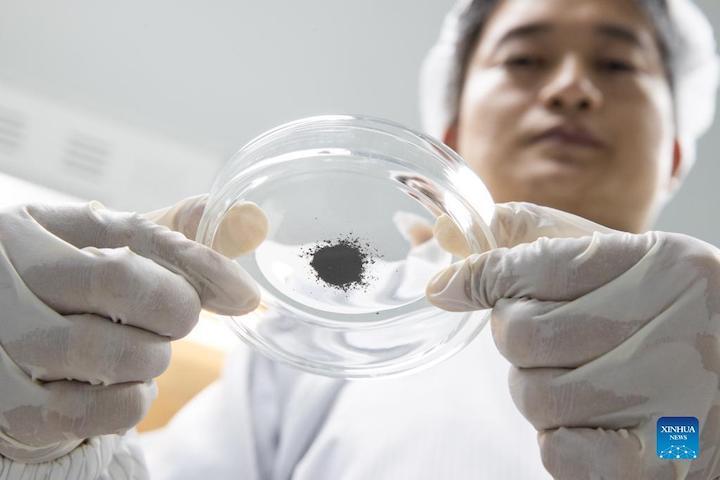 Tian Hengci, an associate research fellow, deals with lunar samples at the Institute of Geology and Geophysics of the Chinese Academy of Sciences in Beijing, capital of China, Oct. 15, 2021. Chinese researchers have studied the lunar samples brought back by the Chang'e-5 mission and dated the youngest rock on the Moon at around 2 billion years in age, extending the "life" of lunar volcanism 800-900 million years longer than previously known. The study, conducted mainly by a research team at the Institute of Geology and Geophysics (IGG), Chinese Academy of Sciences (CAS), was presented in three Nature papers and published online Tuesday. (Xinhua/Jin Liwang)

Chinese researchers have studied the lunar samples brought back by the Chang'e-5 mission and dated the youngest rock on the Moon at around 2 billion years in age, extending the "life" of lunar volcanism 800-900 million years longer than previously known.

The study, conducted mainly by a research team at the Institute of Geology and Geophysics (IGG), Chinese Academy of Sciences (CAS), was presented in three Nature papers and published online Tuesday.

Last year, China's Chang'e-5 mission retrieved samples from the Moon weighing about 1,731 grams, which were the first lunar samples in the world in over 40 years.

"The Chang'e-5 mission was a success and the lunar samples brought back shed new light on the evolution of the Moon," said Li Xianhua, an academician with CAS who led the research team.

"The magma of the Moon has solidified, and the Moon's geologic activity has already ceased. When the Moon's volcanic activity stopped, it emerged as one of the major issues in its evolutionary history," said Li Qiuli, head of the secondary ion mass spectrometry laboratory of IGG.

The youngest dated rock from the Apollo and Luna missions and lunar meteorites was around 2.8-2.9 billion years old. However, more samples are needed and one of the Chang'e-5 tasks is to explore the youngest magmatic activity of the Moon.

"The dimply surface we see when we look up at the Moon through a telescope is due to the fact that many asteroids have collided with it over billions of years. Older rocky regions have experienced more impact craters over time, and regions with younger rocks have fewer craters," said Li Qiuli.

Using the method of chronology known as crater counting, researchers inferred that the Oceanus Procellarum, the landing site of the Chang'e-5 mission, was most likely to have been witness to one of the Moon's last volcanic eruptions. Researchers could then calibrate the results from crater counting with radioisotopically dated samples.

Radioisotopic dating works on the principle that radioactive elements have constant decay rates. By measuring the relative abundances of the parent and daughter isotopes, researchers will know how long the decay has been taking place.

Using the microscope, researchers manually picked out rock fragments from their 3-gram lunar samples, which is as difficult as separating black flour from white flour by hand. Most of these minerals suitable for dating are only one-twentieth of the diameter of a hair.

Li Qiuli said that the research team had been well-prepared for studying the lunar samples retrieved by China, and has continuously developed the ion probe technology in the past decade, reaching an internationally acclaimed level of expertise.

"Our palms were sweaty as we loaded the sample and turned on the mass spectrometer. When we saw the age it spat out, we couldn't believe our luck. But we wanted to be sure," said Li Qiuli, adding that they carried out more than 200 tests.

In total, the team analyzed 47 different rock fragments extracted from the sample materials and dated the youngest rock on the Moon at 2.03 billion years old. The new age extends the life of lunar volcanism 800-900 million years longer than previously known.

"The Moon is only around one percent the mass of Earth. At that strikingly small size, theoretically, at least, it should have completely solidified at a quick pace. Our team investigated further why volcanic activity still existed on the Moon so late," said Li Xianhua.

Lunar scientists focused on KREEP, an acronym built from the letters K (for potassium), REE (for rare-earth elements) and P (for phosphorus), which is a distinctive geochemical component of some lunar rocks.

"A widely accepted hypothesis is that radioactive elements (U, Th and K) supplied the heat necessary for the late volcanic activity. Because KREEP is rich in radiogenic elements U, Th and K, it is therefore thought to be responsible for the young volcanic activity," said Yang Wei, a researcher with IGG.

"Isotopes are an effective way to identify the KREEP component as they are like the DNA of a rock and will not change through the magmatic evolution," said Yang.

However, the difficulty lies in the small size of the basalt clasts in the Chang'e-5 lunar samples. It is hard to obtain the isotope ratios of the Chang'e-5 basalt.

"It's like DNA testing, which requires a large tube of blood, but we can only use one drop," said Yang.

Thanks to the institute's efforts over a decade, a state-of-the-art method for analyzing samples under high magnification has been developed, allowing researchers to obtain the strontium and neodymium isotope ratios of specific minerals.

The results were beyond expectations. The Chang'e-5 basalt, the youngest basalt dated on the Moon so far, originated from a depleted mantle source with a KREEP component measuring less than 0.5 percent of its weight.

In other words, it is unlikely that the KREEP components in the lunar mantle supplied the heat necessary for the late volcanic activity.

Another possible cause of volcanic activity on the Moon at such a late age is that the mantle source might have contained water to reduce its melting point, said scientists.

"The water content of the lunar mantle is a key question for lunar exploration because it provides critical constraints on the formation of the Moon. Furthermore, since water can significantly decrease the melting temperature of rocks, understanding its abundance is important for understanding the history of lunar volcanism," said Lin Yangting, a researcher with IGG.

The large discrepancy in water abundance estimates of the lunar mantle could be mainly attributed to the Apollo samples and lunar meteorites being generally quite old.

Most previous lunar samples with measured water content date back to 3 billion years or earlier. Such old rocks could have undergone heavy modifications over a long time by the impact of asteroids and particles from the sun.

"The samples retrieved by Chang'e-5 were from a single basaltic lava flow. With such a simple and clear geological setting, the samples, therefore, provide a good opportunity to address the question of whether the mantle reservoir at 2 billion years was wet or dry," said Lin.

The research team analyzed the water contents and hydrogen isotopes of pockets of melt preserved in some minerals as well as the mineral apatite, which can contain water, from Chang'e-5 basalts.

"We used a nano-scale ion probe called the nanoSIMS, a secondary ion mass spectrometer with an ion beam down to 50 nanometers in diameter. The relative abundances of the two isotopes of hydrogen (deuterium [D] and hydrogen [H]) can serve as a 'fingerprint' to trace the reservoirs of water and the magmatic processes involved," said Lin.

The mystery of the late lunar volcanic activity is yet to be solved.

"Our discoveries raise new questions for the future of lunar exploration and scientists need to further explore the formation mechanism of the lunar magma," said Li Xianhua. Enditem 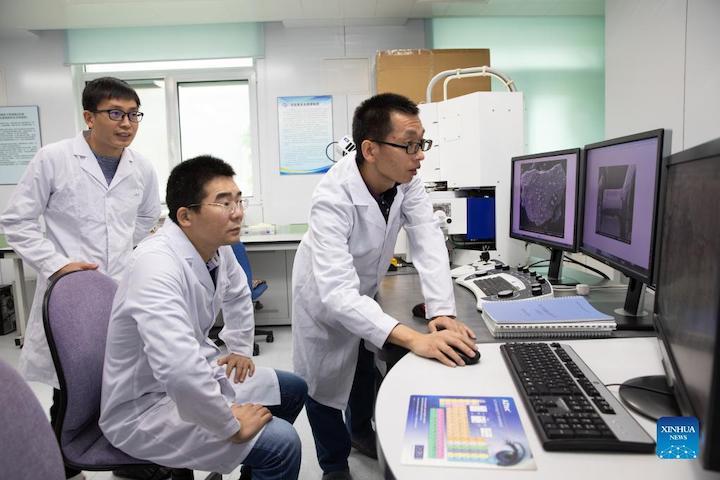 Researchers discuss experiment progress at the Institute of Geology and Geophysics of the Chinese Academy of Sciences in Beijing, capital of China, Oct. 18, 2021. Chinese researchers have studied the lunar samples brought back by the Chang'e-5 mission and dated the youngest rock on the Moon at around 2 billion years in age, extending the "life" of lunar volcanism 800-900 million years longer than previously known. The study, conducted mainly by a research team at the Institute of Geology and Geophysics (IGG), Chinese Academy of Sciences (CAS), was presented in three Nature papers and published online Tuesday. (Xinhua/Jin Liwang)