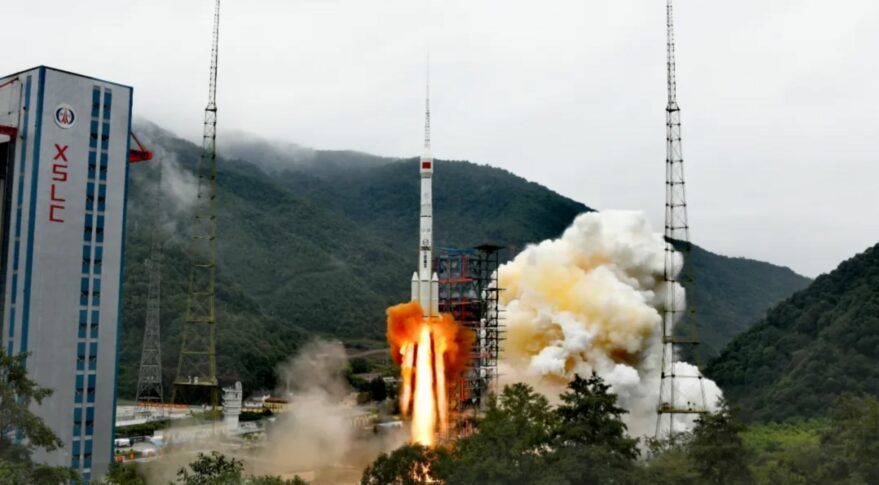 No details of the satellite or its capabilities were made available. Coupled with the fact that space debris mitigation technologies are “dual-use,” having both civilian and military applications, the satellite is likely to attract interest and scrutiny outside China.

A commercial case for active debris removal and, in the case of geostationary orbit, repairing and refueling satellites or delivering them to graveyard orbits, is being made globally.

The Shanghai Academy of Spaceflight Technology unveiled a “supplemental service spacecraft” at the Zhuhai Airshow in late September. After approaching to within approximately two meters of a target it would be able to dock with and refuel a compatible satellite.  SpaceLogistics, a subsidiary of Northrop Grumman, has developed Mission Extension Vehicles, while DARPA, the European Space Agency, Astroscale of Japan and others are developing refueling spacecraft.

The classified nature and lack of transparency regarding the intentions and actors involved in the Shijian-21 mission could spark concern, however. The same capabilities to rendezvous with and attach to a satellite for refueling and repair could also be used to disable spacecraft of adversaries.

Shijian (“practice”) satellites are broadly technology demonstration satellites. Shijian-17, launched by the first Long March 5 heavy-lift rocket in 2016, is an experimental satellite for communication and broadcast services. It also carried out rendezvous and proximity operations in geostationary orbit.

The Secure World Foundation has tracked Chinese and other space actors’ rendezvous and proximity operations. It notes that Shijian-17 has demonstrated maneuverability around the geostationary belt, circumnavigated Zhongxing-5A (ChinaSat-5A) and made later approaches to Zhongxing-6B and Shijian-20, which launched in December 2019.

The Saturday launch of the Long March 3B indicates that the launcher was not the cause of an issue affecting the Sept. 27 launch of Shiyan-10, another classified spacecraft. The satellite was apparently unresponsive in terms of propulsion for more than two weeks before a series of burns raised its perigee by hundreds of kilometers each time and indicated to the outside world that Shiyan-10 was active.

Shiyan-10 continues to alter its orbit and has raised its perigee to 1,100 kilometers, according data from the U.S. Space Force’s 18th Space Control Squadron (SPCS). The satellite is understood to have been targeting a geosynchronous orbit, with a current apogee of 40,100 km. Neither CASC nor state media have provided an update on the health or situation of the Shiyan-10 satellite.

The Long March 3B was slated for a busy end to 2021, and appears fit to continue its role as a workhorse among China’s Long March rockets.

The launch was CASC’s 36th launch of the year and 39th overall for China, including launches from state-owned spinoff Expace and private firm iSpace. China’s next launch will set a national record for orbital launches in a calendar year, surpassing the 39 set in 2018 and matched in 2020.

CASC is targeting more than 40 launches before the end of the year. Private firm Galactic Energy are soon expected to conduct their second launch, while Expace’s efforts to launch a second Kuaizhou-1A record this year have been hit by a COVID-19 outbreak.