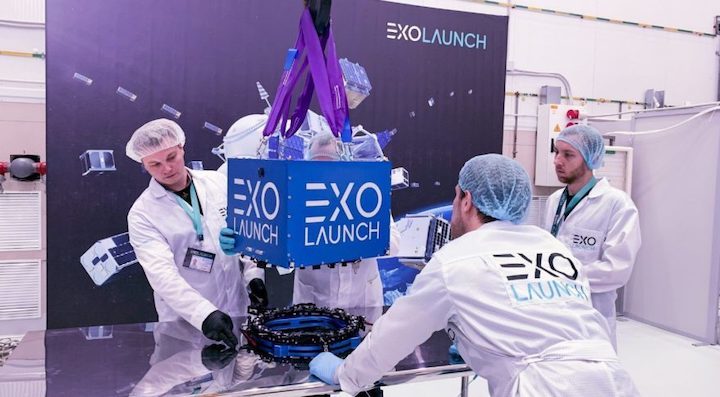 TAMPA, Fla. — German launch services provider Exolaunch is expanding to the U.S. in search of a greater share of the rapidly growing market, stepping up competition against Seattle-based rideshare broker Spaceflight.

About half the nearly 100 satellites Exolaunch has already booked for launches next year are for U.S. customers, newly appointed Exolaunch USA CEO Chris Hearsey told SpaceNews.

Exolaunch also opened an office in Washington to oversee policy, industry outreach and government affairs to scale up its international business after doubling last year’s sales.

The German venture’s first international expansion underlines its close ties with SpaceX and its Falcon 9 rideshare Transporter missions — widely seen as offering one of the cheapest routes to space for small satellite operators.

Exolaunch has booked satellites on the three to four Transporter missions SpaceX has planned for 2022.

Five rockets are needed to loft the 95 satellites that Exolaunch has arranged launches for in 2022. The venture has also made commitments to use Soyuz rockets, as well as emerging small satellite rocket developers in Germany.

Meanwhile, work is set to begin in the next few weeks for SpaceX’s next rideshare mission

“We can rely on a variety of different launch vehicles, but more importantly we have our launch partner SpaceX, and that gives us the ability to pivot in the market to support as many customers as we can support,” Hearsey said.

While Hearsey said the company is currently “very focused on the commercial market,” he said the U.S. presence could help it secure its first U.S. government customer.

Jeanne Medvedeva, Exolaunch’s vice president of launch services, said during the same interview that the company is in the middle of its first external funding round to accelerate operations to meet surging demand

“We are not a classic startup, relying on external funding and investment rounds from day one,” she said, adding that the venture is “trying to find the best fit for the company and the right point of discussion with the investors.”

Medvedeva expects to make an announcement on funding plans in the first half of 2022.

Spaceflight has been building out its presence in the space tug market, recently unveiling plans for a lunar flyby mission that will use an orbital transfer vehicle to place a small satellite into geostationary orbit.

“I think that there’s a lot of growth, and certainly the current cadence of flights definitely supports our understanding of where we think we can get growth in the market,” Hearsey said.

Medvedeva added: “Honestly, we don’t have much time to think about the competition. We are really focused on getting contracts in place and getting the hardware produced and integrated on time.”

She pointed to how SpaceX’s Transporter missions, which have been selling out “easily and very fast” highlight the level of demand in the market.

“Normally we sign payloads much closer to the launch date, but now we are in a position when we know [the] launch manifest for the next year — a year before most of those launches,” she said.

Exolaunch is a spinoff of the Technical University of Berlin and facilitated its first launch in 2013.