The largest haul of fast radio burst observations ever recorded, all from a single fast radio burst, is helping astronomers understand what causes these fleeting cosmic phenomena 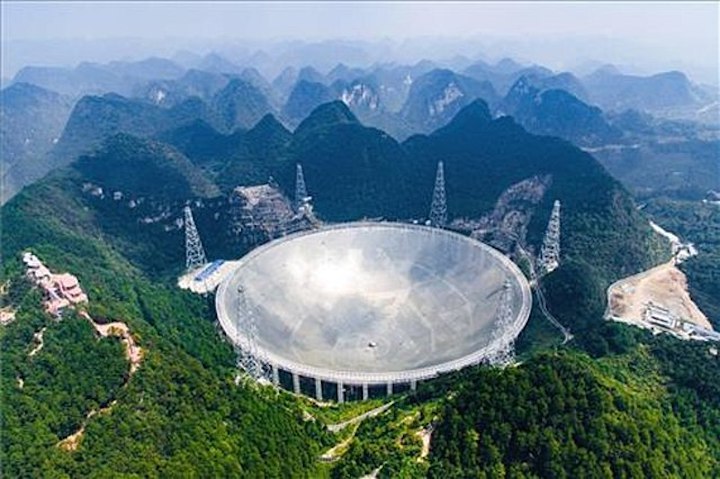 An international team of astronomers poring over data from the Five-hundred-meter Aperture Spherical radio Telescope (FAST) in southwest China has documented 1,652 radio-frequency flares of energy from a cosmic source about 3 billion light-years away.

Captured over a period of 47 days between August and October 2019, the huge collection of fast radio bursts (FRBs) recently reported in Nature is more than the number documented in all other studies combined. Already, the team behind the observations has used this new treasure trove to try to dissect what causes these brief and mysterious celestial explosions.

Detected for the first time in 2007, FRBs are puzzling flickers of radio waves from across the cosmos that last thousandths of a second. They pop up multiple times a day, and each burst releases staggering amounts of energy. Some appear to be one-off explosions, while a smaller number of sources are known to repeat.

The source FAST zoomed in on for this study — FRB 121102 — is a repeater. The first discovered and most-studied repeating source, FRB 121102 usually sends out a flurry of bursts for 90 days followed by a silent 67-day period. “Repeaters are interesting because we want to understand the behavior, how these guys are making FRBs,” says study coauthor Bing Zhang (University of Nevada, Las Vegas). “The more repeated bursts we get, the more we can learn.”

When they plotted out the energy of each of the 1,652 bursts against the burst rate, the researchers spotted a surprising feature. They couldn’t fit the energy distribution to a single best-fit curve. Instead, they had to use two curves. High-energy bursts matched the distributions of previous results, whereas low-energy bursts did not.

“It suggests there are probably two processes at play because you have two different types of energy distributions,” says Pragya Chawla (University of Amsterdam), who was not involved in the study. “Probably the source emits low-energy bursts one way and high-energy bursts another.”

BURSTS FROM A MAGNETAR?

More than 50 ideas have been put forward to explain what these burst sources are, ranging from those couched in established theory, like wandering pulsars or neutron star mergers, to outlandish concepts, like beams used to power alien light sails. Until recently, choosing which scenarios were the most probable was nigh on impossible. But this all changed last year when an FRB was found inside the Milky Way, as reported in Nature. The source of this brief burst was known magnetar SGR 1935+2154 — a highly magnetized neutron star.

“Just based on that observation, I think at least some fraction of FRBs are produced by magnetars,” adds Chawla. In fact, many astronomers, including Zhang, now think magnetars are the leading candidate FRB source. Do the new FRB 121102 data support the magnetar picture?

In a press release, co-lead investigator Pei Wang (National Astronomical Observatories of the Chinese Academy of Sciences) stated that the study “severely constrains the possibility that FRB 121102 comes from an isolated compact object” like a magnetar, because too much energy was released during the observing period and there was no periodic pattern to the bursts; which would otherwise suggest the source spins or orbits at a set pace.

For his part, Zhang is less pessimistic. Before this work, astronomers had put forward two main mechanisms that could explain how a magnetar could produce FRB 121102’s bursts. One suggested that FRBs are generated from within the region where a magnetar’s magnetic field dominates. The other posited that shocks travelling close to light speed propagate beyond the magnetar’s magnetic influence and then collide with electrons to emit the characteristic bursts.

Based on the frequency and energy of the 1,652 bursts observed, the team calculated that if shocks created FRBs, they would consume about 38% of the magnetar’s entire energy in less than two months. “That is crazy because this source has existed for at least 10 years,” adds Zhang. In contrast, Zhang says that if the observed FRBs were generated from within the star’s magnetosphere the total energy emitted “is absolutely fine.”

TO CATCH A NEARBY BURST

To get to the bottom of this mystery and finally illuminate the nature of FRBs, Zhang and colleagues are hopeful that bursts start to appear closer to home in the near future. “FRB 121102 is a little bit too far away,” he says. “If we can detect, say, a thousand bursts from a nearby source, then we can learn more.”

Unfortunately, FAST only observes an area equal to a tenth the angular size of the full Moon, making it a poor FRB hunter. For that, other radio telescopes, such as the Canadian Hydrogen Intensity Mapping Experiment (CHIME) that Charwal works on, are important. Observing an area roughly 1,000 times larger than the Moon, CHIME spots hundreds of FRBs a year. But, of these, only a handful come from nearby galaxies, and so far only one has hailed from within the Milky Way.  (FAST has not yet spotted any FRBs from the Milky Way magnetar due to unlucky timing.)

When CHIME finally does zero in on a suitable nearby FRB source, FAST’s enormous sensitivity can then be wielded to detect thousands of low-energy bursts that would otherwise go unnoticed, and hopefully pin down how these bursts are born once and for all.

Though he is guarded about revealing details of current investigations, Zhang teases that using this approach they have already spotted something intriguing. “All I can say is, just please stay tuned, there should be more excitement.”