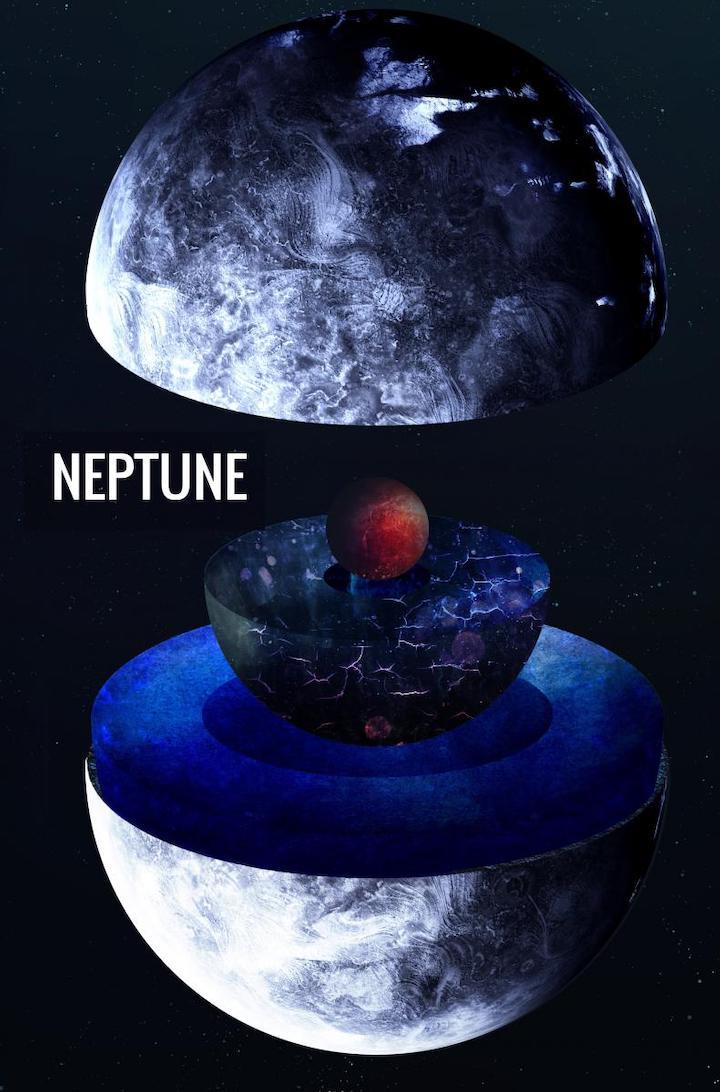 Washington, DC—A layer of “hot,” electrically conductive ice could be responsible for generating the magnetic fields of ice giant planets like Uranus and Neptune. New work from Carnegie and the University of Chicago’s Center for Advanced Radiation Sources reveals the conditions under which two such superionic ices form. Their findings are published in Nature Physics.

As all school children learn, water molecules are made up of two hydrogen atoms and one oxygen atom—H20. As the conditions in which water exists change, the organization and properties of these molecules are affected. We can see this in our everyday lives when liquid water is boiled into steam or frozen into ice.

The molecules that comprise ordinary ice that you might find in your drinking glass or on your driveway in winter arranged in a crystalline lattice held together by hydrogen bonds between the hydrogen and oxygen atoms. Hydrogen bonds are highly versatile. This means that ice can exist in a striking diversity of different structures—at least 18 known forms—which emerge under increasingly extreme environmental conditions.

Of particular interest is so-called superionic ice, formed at very high pressures and temperatures, in which the traditional water molecule bonds are shifted, allowing the hydrogen molecules to float freely in an oxygen lattice. This mobility makes the ice capable of conducting electricity almost as well as a metallic material.

Observations of hot, superionic ice created in the lab have led to contradictory results and there has been a great deal of disagreement about the exact conditions under which the new properties emerge.

“So, our research team, led by the University of Chicago’s Vitali Prakapenka, set out to use multiple spectroscopic tools to map changes in ice’s structure and properties under conditions ranging up to 1.5 million times normal atmospheric pressure and about 11,200 degrees Fahrenheit,” explained Carnegie’s Alexander Goncharov.

Figure illustrating how the experiments were performed, revealing two forms of superionic ice, courtesy of Vitali Prakapenka.By doing this, the scientists—also including Nicholas Holtgrewe formerly of Carnegie, now at the Food and Drug Administration in St Louis, and Sergey Lobanov, formerly of Carnegie, now at the GFZ German Research Center for Geosciences—were able to pinpoint the emergence of two forms of superionic ice, one of which they suggest could be found in the interiors of ice giant planets Uranus and Neptune.

“In order to probe the structure of this unique state of matter under very extreme conditions—heated by a laser and compressed between two diamonds—we used the Advanced Photon Source’s brilliant high-energy synchrotron x-ray beam, which was focused down to about 3 micrometers, 30 times smaller than a single human hair,” said Prakapenka, explaining the work done using the facility’s GSECARS beamline. “These experiments are so challenging that we had to run a few thousand of them over a decade to get enough high-quality data to solve the long-standing mystery of high-pressure, high-temperature behavior of ice under conditions relevant to giant planet interiors.”

“Simulations have indicated that the magnetic fields of these two planets are generated in thin, fluid layers found at relatively shallow depths,” Goncharov added. “The conductivity of superionic ice would be able to accomplish this type of field generation and one of the two structures we revealed could exist under the conditions found in these magnetic field-generating zones.”

Further study is needed to understand the conductive properties and viscosity of these ice phases under ice giant-interior conditions.