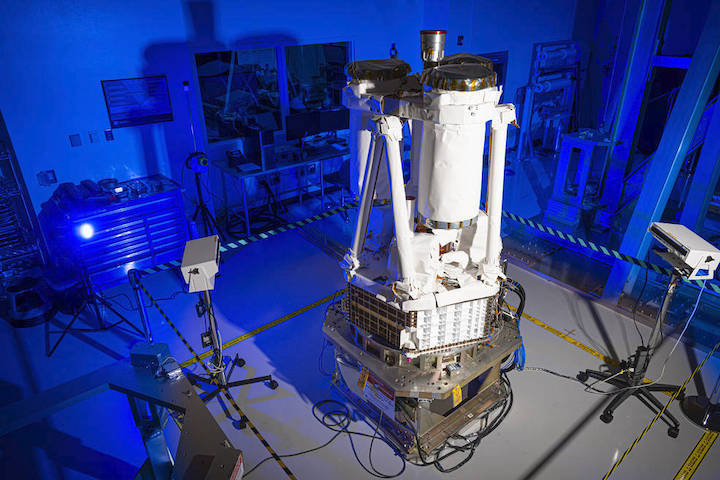 The launch of the Imaging X-Ray Polarimetry Explorer (IXPE) observatory is now targeting December 13, 2021, onboard a SpaceX Falcon 9 rocket from the Kennedy Space Center in Florida. The IXPE X-Ray observatory is the latest spacecraft in NASA’s historic Small Explorers (SMEX) program.

The IXPE mission was first selected as a part of the Explorers program in January 2017. NASA awarded the IXPE team $188 million for the spacecraft and mission, including the cost of the launch vehicle, post-launch operations, and data analysis. The spacecraft will be used to study Black Holes and other cosmic X-ray mysteries.

Built by Ball Aerospace at facilities in Boulder, Colorado, the IXPE spacecraft is based on the Ball Configurable Platform (BCP)-100 satellite bus. The BCP-100 is one of Ball Aerospace’s offerings for a modular satellite bus for low-Earth orbit (LEO) operations. It was most recently used by NASA’s Green Propellant Infusion Mission (GPIM) to test a new type of Green propellant for space operations.

IXPE is not the only space observatory Ball Aerospace has built. Ball built the Kepler space telescope, instruments for the Hubble and Spitzer space telescope. Ball also made the Wide-field Infrared Survey Explorer (WISE), now named Near-Earth Orbit (NEO)WISE, which is also a part of the Explorers program.

Using the BCP-100 satellite bus, IXPE will weigh a total of ~325kg. When launched, the spacecraft will be 1.1 meters in diameter and 5.2 meters tall when the spacecraft is fully extended. The solar array will be 2.7 meters when fully deployed. IXPE will have a two-year primary mission while in orbit.

The IXPE spacecraft is separated into two different parts. The first is the main spacecraft with the solar array, attitude control, and communication systems. The second part is attached with a deployable payload boom with its X-Ray shield and main Mirror Module Support Structure (MMSS) deck. 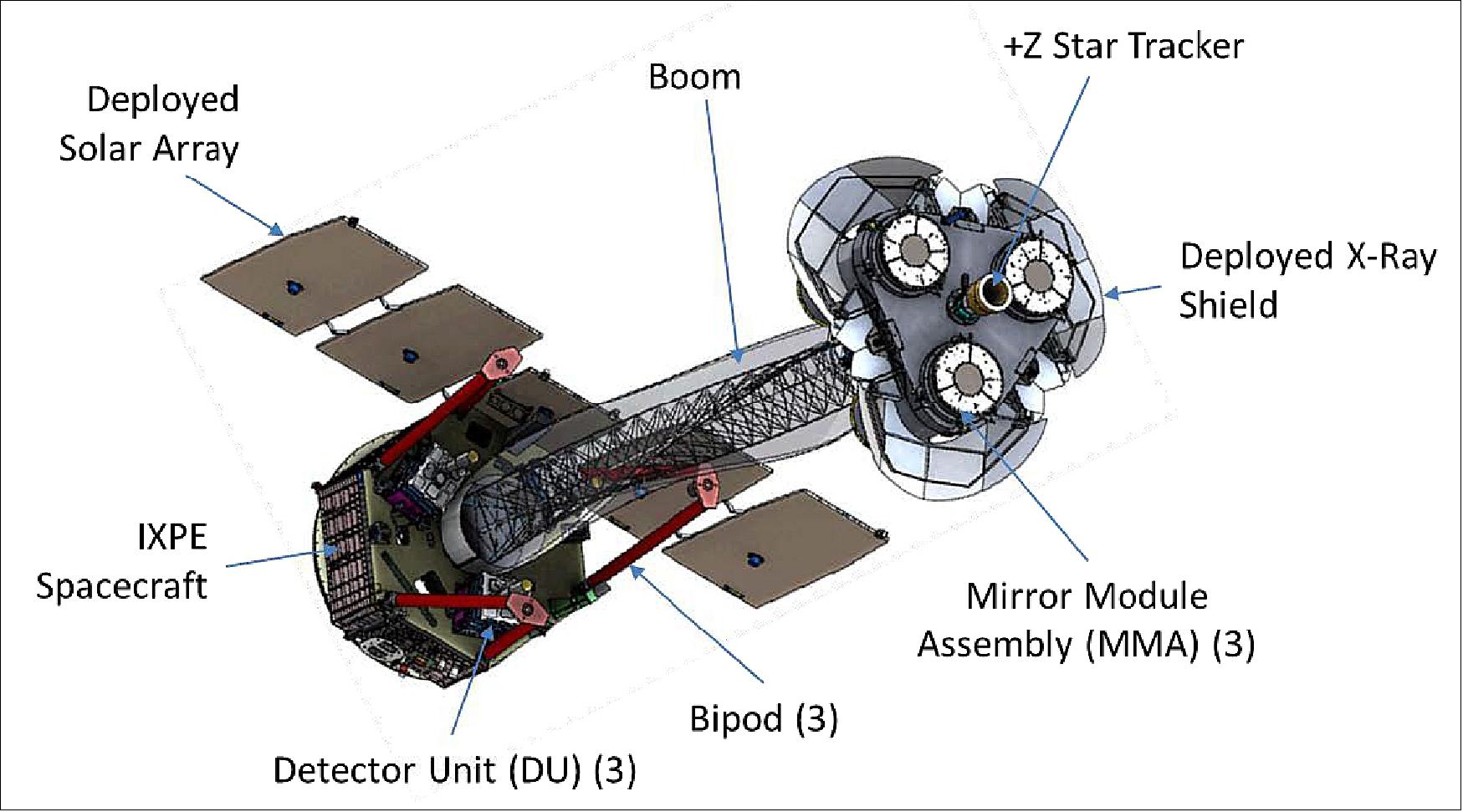 The MMSS will consist of three separate mirror-based telescopes, all with a focal length of four meters. The focal length will be achieved by the deployable boom. The telescopes will focus X-rays seen from space onto a polarization-sensitive imaging detector developed in Italy. The telescopes will have a 2-8 keV range, an 11-arcminute field of view, and ≤30-arcsecond angular resolution. IXPE’s detectors will be two orders of magnitude more sensitive than those on the Orbiting Solar Observatory (OSO)-8 mission.

Using these three telescopes, IXPE will study X-ray Polarization. X-Ray Polarization is a specific area of X-Ray astronomy that allows scientists to study matter distribution, the spin of black holes, and more. IXPE is the first of its kind to study polarized X-Rays from extreme objects like neutron stars, stellar and supermassive black holes.

IXPE completed its Critical Design Review (CDR) in July 2019. From there, the spacecraft underwent construction and assembly. In September 2020, the Mirror Module Assembly (MMA) was delivered to Ball Aerospace in Boulder. A month later, the MMA was installed on the MMSS deck. In December 2020, the extendable boom arm underwent a deployment test.

By the end of January 2021, the spacecraft was completed and began environmental testing. In August 2021, IXPE completed a 21-day thermal vacuum test with its boom extended. By the end of August, the arm was stowed and was back in its cleanroom.

Next up for IXPE is the completion of all of its pre-launch testing. Soon it will be delivered from Ball’s facilities in Boulder to Kennedy Space Center in Florida for its launch.

IXPE is currently set to launch on a SpaceX Falcon 9, likely from historic Launch Complex 39A. In 2019 NASA awarded SpaceX $50.3 million to launch IXPE. IXPE was originally designed to be launched on an air-launched Northrop Grumman Pegasus-XL launch vehicle, but SpaceX ended up winning the contract to launch IXPE. 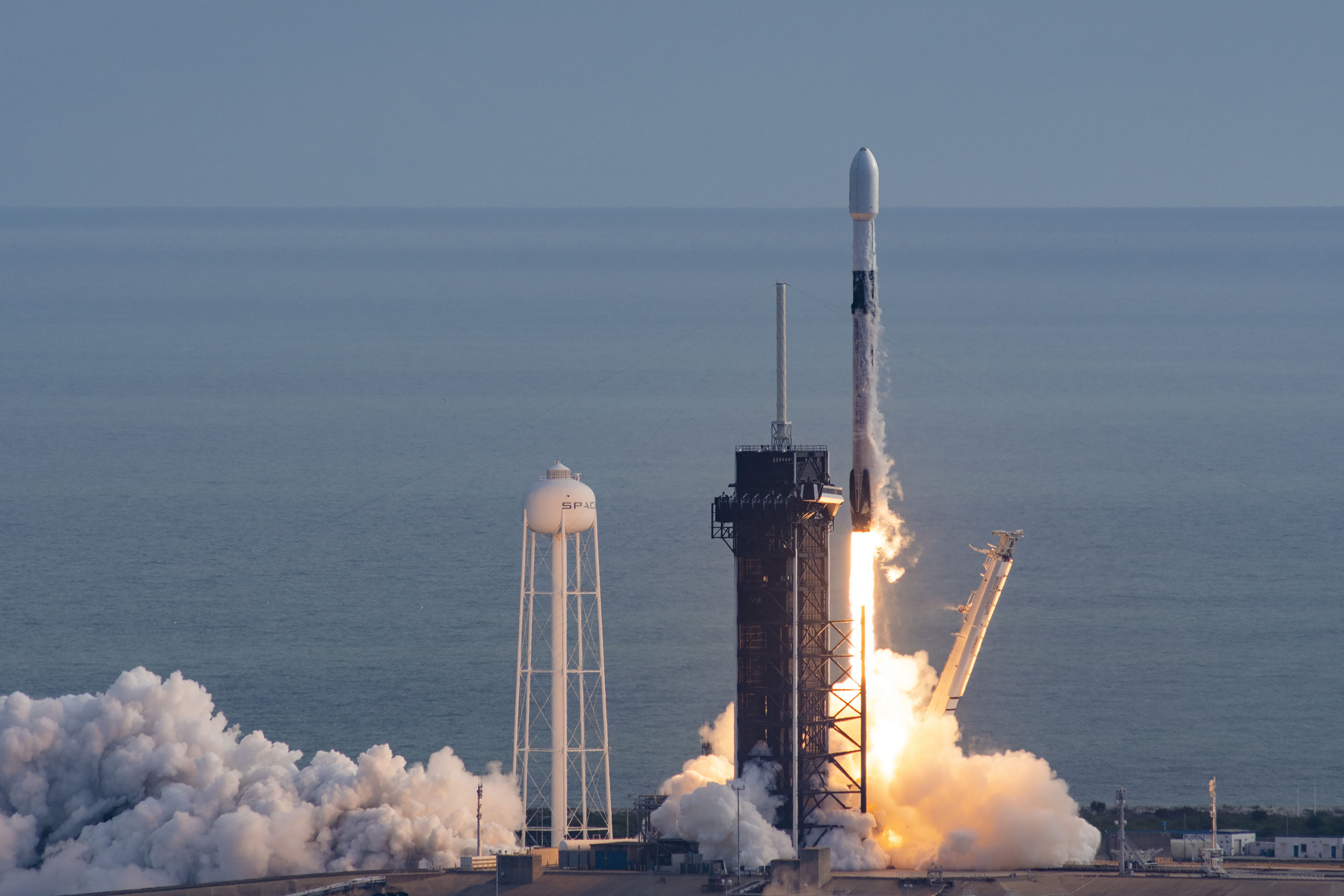 Originally targeting May 2021, it was delayed due to the COVID-19 pandemic to late-2021. The launch is currently scheduled for no earlier than (NET) on December 13, 2021.

The Falcon 9 will launch IXPE in a circular 590km orbit by 0.2 degrees inclination. Also, given IXPE’s size and weight, it may conduct a Return-To-Launch Site (RTLS) landing at SpaceX’s Cape Canaveral Landing Zone-1. Once separated from the Falcon 9, it will extend its solar array and payload boom to begin its mission.

IXPE is the latest in a very long list of satellites in the Explorers program. The Explorers program started in the 1950s as a US Army program to launch the first artificial satellite to orbit. The first US satellite, Explorer-1, was launched via a Juno-1 rocket in January 1958, before the program was taken over by NASA when it was founded in October 1958.

Over time the program evolved to what it is today. The program is now separated into three main different classes and one minor class. There is a Medium-Class Explorers (MIDEX), the SMEX (which IXPE is a part of), the University-Class Explorers (UNEX), and Mission of Opportunity (MO).

Some of the active MO missions include the Two Wide-Angle Imaging Neutral-Atom Astrometers (TWINS), which is a pair of instruments on the USA-184 (NROL-22) and the USA-200 (NROL-28) missions. Another mission is the Neutron Star Interior Composition Explorer (NICER) X-Ray telescope which was launched on the SpaceX CRS-11 mission to the International Space Station. The most recent mission to fly is the Global-scale Observation of the Limb and Disk (GOLD) mission currently onboard the Airbus-built SES-14 spacecraft.

THEMIS is a mission comprised of five spacecraft, of which three are in highly-elliptical Earth orbit and two in a Lunar orbit. The two in Lunar orbit were renamed ARTEMIS P1 and P2. THEMIS and ARTEMIS are both working in tangent with each other and other spacecraft to help study the Sun and its effect on the Earth’s magnetosphere. Their mission will continue until all spacecraft run out of fuel. 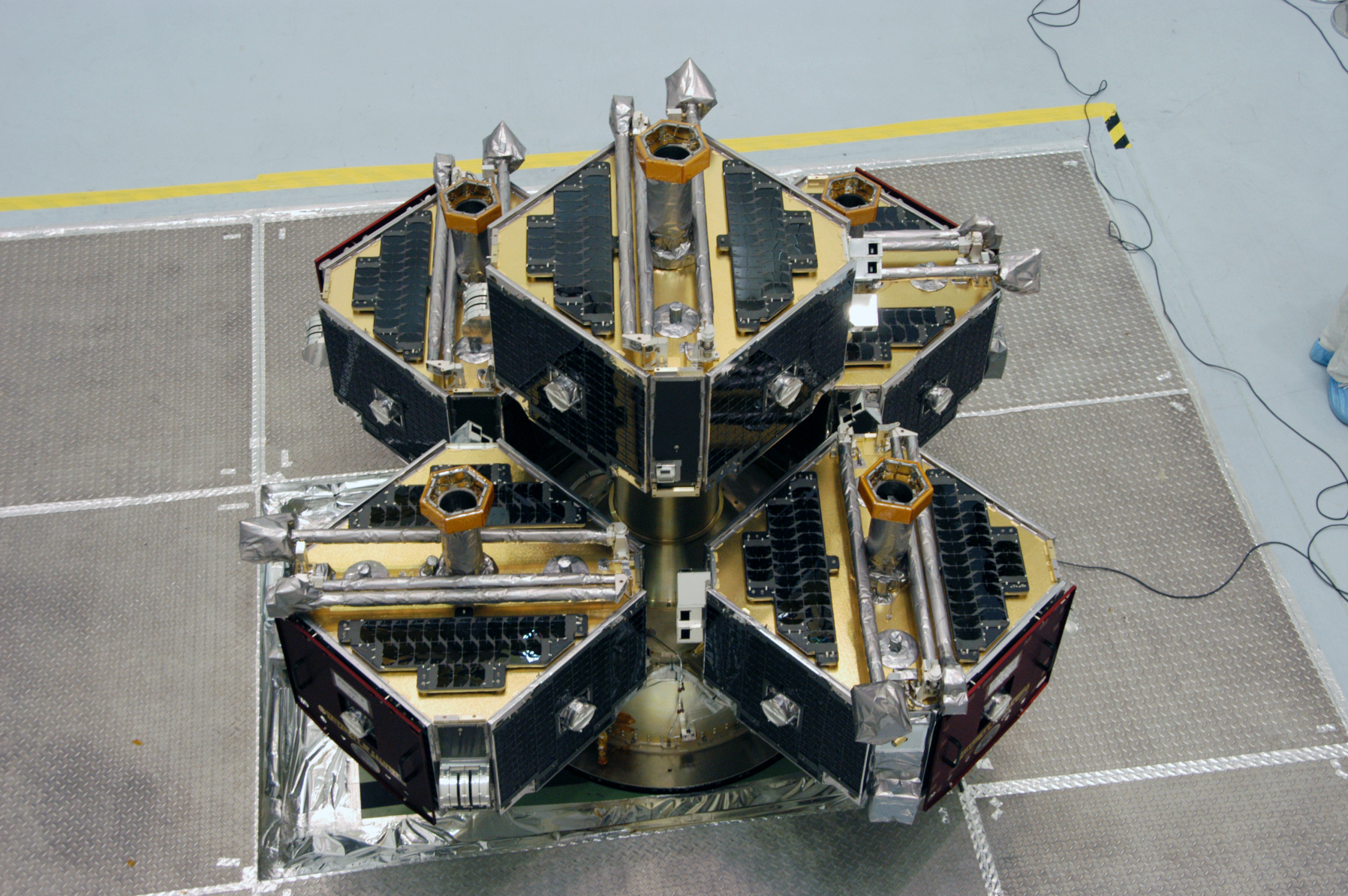 NEOWISE is currently in a Sun-synchronous orbit on a mission to detect Near-Earth objects. In July 2021, its mission was extended until June 2023. A future spacecraft, NEO Surveyor, will replace NEOWISE when it launches in 2026. It is currently in Phase B of program development.

The Explorers program allows opportunities for heliophysics and astrophysics science areas. The program still has several more missions coming up for future missions. The next SMEX missions following IXPE are the Polarimeter to Unify the Corona and Heliosphere (PUNCH) and the Tandem Reconnection and Cusp Electrodynamics Reconnaissance Satellites (TRACERS) missions. Both will launch together on an unassigned launch vehicle in October 2023. The two are currently in Phase B and are undergoing design and technology completion.

In 2024, several more Explorer missions will launch, including the Spectro-Photometer for the History of the Universe, Epoch of Reionization, and Ice Explorer (SPHEREx), as well as the Sun Radio Interferometer Space Experiment (SunRISE) mission. SPHEREx is currently in Phase C, which means it is now in Final Design and Fabrication; it will launch in September 2024 on a Falcon 9 from Vandenberg Space Force Base.

SunRISE just entered Phase B of its development in September 2021. The six spacecraft will launch onboard a Maxar-built satellite to geostationary orbit, currently planned for some time between April 2024 and September 2025. 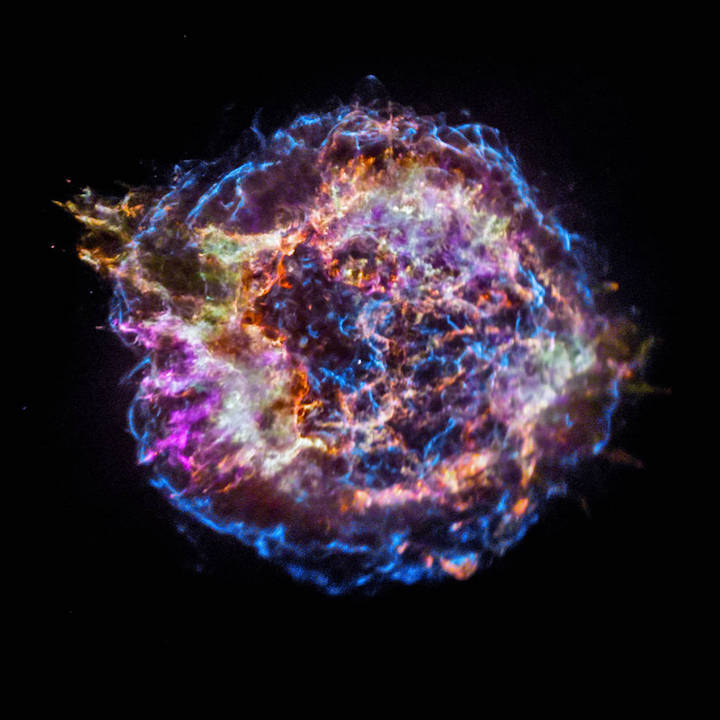 Cassiopeia A (Cas A), a supernova remnant, is one object that NASA’s IXPE mission will study.
Credits: NASA/CXC/SAO

Media accreditation is open for the upcoming launch of NASA’s Imaging X-ray Polarimetry Explorer (IXPE) mission, which will measure polarized X-rays from exotic cosmic objects, such as black holes and neutron stars, to better understand these types of phenomena and extreme environments.

IXPE is scheduled to launch no earlier than Dec. 9 on a SpaceX Falcon 9 rocket from Space Launch Complex 39A at NASA’s Kennedy Space Center in Florida.

Credentialing deadlines are as follows:

NASA’s media accreditation policy is available online. Requests must be submitted online at:

NASA’s COVID-19 policies are updated as necessary and to remain consistent with guidelines issued by the Centers for Disease Control and Prevention and the White House Safer Federal Workforce Taskforce. COVID-19 safety protocols for this event will be communicated closer to the date of the event. The agency also will communicate any updates that may impact mission planning or media access as necessary.

This astrophysics mission will allow astronomers to discover, for the first time, the hidden details of some of the most exotic astronomical objects in our universe. IXPE is the first satellite mission dedicated to measuring the polarization of X-rays from a variety of cosmic sources. Polarization is an intrinsic characteristic of light that can vary as it travels through different environments. The mission will fly three space telescopes with sensitive detectors capable of measuring the polarization of cosmic X-rays, allowing scientists to answer fundamental questions about these extremely complex environments where gravitational, electric, and magnetic fields are at their limits.

IXPE is a collaboration between NASA and the Italian Space Agency, led by principal investigator Martin Weisskopf at NASA's Marshall Space Flight Center in Huntsville, Alabama. Ball Aerospace, headquartered in Broomfield, Colorado, manages spacecraft operations with support from the University of Colorado at Boulder. NASA's Goddard Space Flight Center in Greenbelt, Maryland, manages the Explorers Program for the agency's Science Mission Directorate in Washington. The launch is managed by NASA’s Launch Services Program.