Multiple asteroids will pass close by Earth in the next few weeks — and one that passed on Friday was around the size of the Great Pyramid of Giza in Egypt, with a diameter of 525 feet.

On Friday, Asteroid 2021 SM3 passed within 3.5 million miles of Earth, according to data from NASA's Center for Near Earth Object Studies. The asteroid was only first observed a few weeks ago.

The asteroids that are expected to pass Earth, along with 2021 SM3, are classified as Near Earth Objects. NASA said that NEOs are "comets and asteroids that have been nudged by the gravitational attraction of nearby planets into orbits that allow them to enter the Earth's neighborhood."

NEOs formed in the cold outer planetary system are normally "water ice with embedded dust particles," while asteroids formed in the warmer inner solar system "between Mars and Jupiter" are more rocky. Since they were formed from largely untouched debris from when the solar system formed 4.6 billion years ago, scientists believe NEOs hold information about the beginning of our universe.

"If we wish to know the composition of the primordial mixture from which the planets formed, then we must determine the chemical constituents of the leftover debris from this formation process - the comets and asteroids," the Center for Near Earth Object Studies said.

On Wednesday, Asteroid 1996 VB3 will come within 2 million miles of Earth, about 8 times further away than the moon. While that may seem far, it's significantly closer than our nearest neighbor, Mars, which is 33 million miles away. Asteroid 1996 VB3 is estimated to be up to 690 feet in diameter — about half the height of the Empire State Building.

Then, Asteroid 2017 SJ20 is expected to pass Earth on October 25 slightly further away, at around 4.5 million miles. The asteroid is estimated to be up to 600 feet wide. 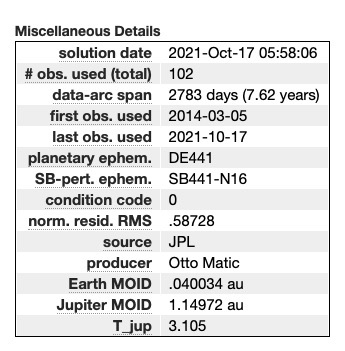 These asteroids aren't coming close enough to hit Earth, and the NASA center said not to worry.

"No one should be overly concerned about an Earth impact of an asteroid or comet. The threat to any one person from auto accidents, disease, other natural disasters and a variety of other problems is much higher than the threat from NEOs," the center said.

However, the possibility of an asteroid hitting Earth is not zero.

"Over long periods of time, however, the chances of the Earth being impacted are not negligible," the center said. But since around 90% of NEOs with a diameter greater than half a mile are already discovered, the NASA center is focused on identifying the NEOs larger than 490 feet — which would pose the most threat.

"At the moment, our best insurance rests with the NEO scientists and their efforts to first find these objects and then track their motions into the future. We need to first find them, then keep an eye on them," the center said.