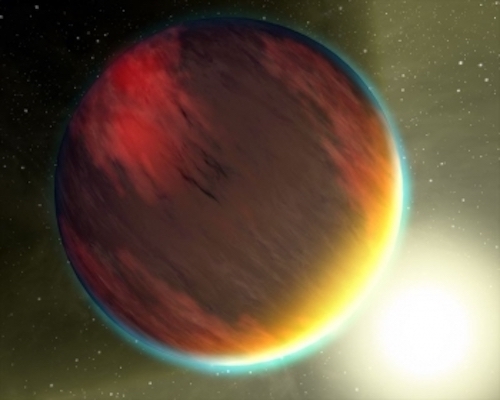 By combining Hubble Space Telescope observations with theoretical models, a team of astronomers has gained insights into the chemical and physical makeup of a variety of exoplanets known as hot Jupiters. The findings provide a new and improved "field guide" for this group of planets and inform ideas about planet formation in general.

Hot Jupiters – giant gas planets that race around their host stars in extremely tight orbits – have become a little bit less mysterious thanks to a new study combining theoretical modeling with observations by the Hubble Space Telescope.

While previous studies mostly focused on individual worlds classified as "hot Jupiters" due to their superficial similarity to the gas giant in our own solar system, the new study is the first to look at a broader population of the strange worlds.

The study, which was published in Nature Astronomy, provides astronomers with an unprecedented "field guide" to hot Jupiters and offers insight into planet formation in general. It was led by Megan Mansfield of the University of Arizona's Steward Observatory and includes ASU co-author and Assistant Professor Michael Line of the School of Earth and Space Exploration. Additional ASU authors include current doctoral student Lindsey Wiser and former doctoral student Ehsan Gharib-Nezhad, currently of NASA Ames Research Center.

Although astronomers think that only about 1 in 10 stars host an exoplanet in the hot Jupiter class, the peculiar planets make up a sizable portion of exoplanets discovered to date, due to the fact that they are bigger and brighter than other types of exoplanets, such as rocky, more Earth-like planets or smaller, cooler gas planets. Ranging in size from about one-third the size of Jupiter to 10 Jupiter masses, all hot Jupiters orbit their host star at an extremely close range, usually much closer than Mercury, the innermost planet in our solar system, is to the sun. A "year" on a typical hot Jupiter lasts hours, or at most a few days. For comparison, Mercury takes almost three months to complete a trip around the sun.

Because of their close orbits, most, if not all, hot Jupiters are thought to be locked in a high-speed embrace with their host stars, with one side eternally exposed to the star's radiation and the other shrouded in perpetual darkness. The surface of a typical hot Jupiter can get as hot as almost 5,000 degrees Fahrenheit, with "cooler" specimens reaching 1,400 degrees — hot enough to melt aluminum.

The research used observations made with the Hubble Space Telescope that allowed the team to directly measure emission spectra from hot Jupiters, despite the fact that Hubble can't image any of these planets directly.

"These systems, these stars and their hot Jupiters, are too far away to resolve the individual star and its planet," Mansfield said. "All we can see is a point — the combined light source of the two."

Mansfield and her team used a method known as secondary eclipsing to tease out information from the observations that allowed them to peer deep into the planets' atmospheres and gain insights into their structure and chemical makeup. The technique involves repeated observations of the same system, catching the planet at various places in its orbit, including when it dips behind the star.

"We basically measure the combined light coming from the star and its planet and compare that measurement with what we see when the planet is hidden behind its star," Mansfield said. "This allows us to subtract the star's contribution and isolate the light emitted by the planet, even though we can't see it directly."

The eclipse data provided the researchers with insight into the thermal structure of the atmospheres of hot Jupiters and allowed them to construct individual profiles of temperatures and pressures for each one. The team then analyzed near-infrared light, which is a band of wavelengths just beyond the range humans can see, coming from each hot Jupiter system for so-called absorption features. Because each molecule or atom has its own specific absorption profile, like a fingerprint, looking at different wavelengths allows researchers to obtain information about the chemical makeup of hot Jupiters. For example, if water is present in the planet's atmosphere, it will absorb light at 1.4 microns, which falls into the range of wavelengths that Hubble can see very well.

The team went a step further by quantifying the observational data and comparing it to models, which were developed by Line, of the physical processes believed to be at work in the atmospheres of hot Jupiters. The two sets matched very well, confirming that many predictions about the planets' nature based on theoretical work appear to be correct, according to Mansfield, who said the findings are "exciting because they were anything but guaranteed."

The results suggest that all hot Jupiters, not just the 19 included in the study, are likely to contain similar sets of molecules, like water and carbon monoxide, along with smaller amounts of other molecules. The differences among individual planets should mostly amount to varying relative amounts of these molecules. The findings also revealed that the observed water absorption features varied slightly from one hot Jupiter to the next.

"Taken together, our results tell us there is a good chance we have the big-picture items figured out that are happening in the chemistry of these planets," Mansfield said. "At the same time, each planet has its own chemical makeup, and that also influences what we see in our observations."

Co-author Line said, “There have been a lot of exciting and unexpected findings with respect to hot Jupiter atmospheres over the past decade. What is nice about this investigation is that perhaps these worlds are not as exotic as we had initially expected; they appear well in line with our model predictions.”

According to the authors, the results can be used to guide expectations of what astronomers might be able to see when looking at a hot Jupiter that hasn't been studied before. The launch of NASA's news flagship telescope, the James Webb Space Telescope (JWST), slated for Dec. 18, has exoplanet hunters excited because Webb can see in a much broader range of infrared light and will allow a much more detailed look at exoplanets, including hot Jupiters.

"There is a lot that we still don't know about how planets form in general, and one of the ways we try to understand how that could happen is by looking at the atmospheres of these hot Jupiters and figuring out how they got to be where they are," Mansfield said. "With the Hubble data, we can look at trends by studying the water absorption, but when we are talking about the composition of the atmosphere as a whole, there are many other important molecules you want to look at, such as carbon monoxide and carbon dioxide, and JWST will give us a chance to actually observe those as well."

This article was written by Daniel Stolte of the University of Arizona, with contributions from Karin Valentine of ASU’s School of Earth and Space Exploration.