How did the guidance, navigation and control system of the Chang’e-5 probe ensure successful lunar descent on hazardous rocky terrain? 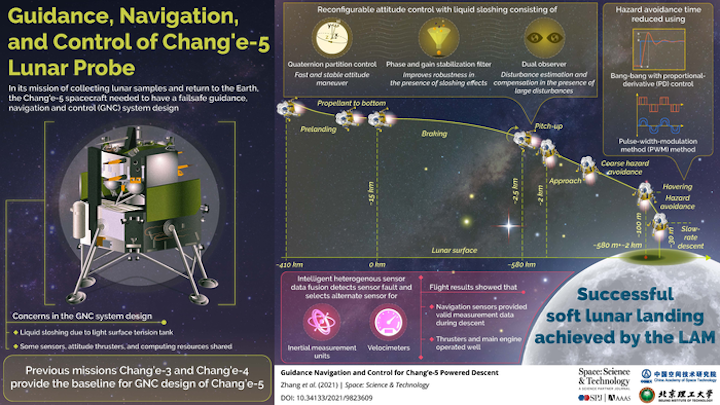 The success of the Chang’e-5 mission, due in no small part to its innovative GNC system, paves the way for future space exploration missions such as asteroid landing, as well as humanity’s most daring dream – crewed space travel.

The fifth lunar exploration mission of the Chinese space program, Chang’e-5, is the first of China’s lunar sample-return missions, with a simple objective: to land on the moon surface, collect samples, and bring them home. The first step would set the tone for the rest of the mission, making it crucial to achieve a ‘soft landing’ (when the spacecraft lands intact) on rocky lunar terrain. The guidance, navigation and control (GNC) system is crucial to this task. A recent study published in Space: Science & Technology by a research team led by Dr. Honghua Zhang of the Beijing Institute of Control Engineering, breaks down the design of the Chang’e-5 GNC system. “We hope that the GNC methods presented in this paper will find application in future lunar exploration, crewed space exploration, and other missions,” says Dr. Zhang.

The Chang’e-5 spacecraft comprised of an orbiter and return module (ORM), which remained in the lunar orbit in space, and a lander and ascender module (LAM), which proceeded to land on the lunar surface. The ascender part of the LAM later returned to the ORM with lunar samples. The ascender then separated from the ORM and performed a controlled deorbit to land on the lunar surface. While previous Chinese lunar missions, Chang’e-3 and Chang’e-4, had successfully achieved soft landings, Chang’e-5 was the first to plan a return to the ORM, providing a new challenge for redesigning its GNC system. The LAM of Chang’e-5 contained some new components, including a ‘light surface tension tank’ for the increased quantity of propellant required to relaunch the LAM from the lunar surface.

The LAM has to be released from the ORM in a ‘horizontal’ orientation but land in a ‘vertical’ orientation. Designing the right guidance method that allows this process of turning upright, called attitude reorientation, while avoiding sloshing the liquid propellant, which would create an imbalance of the internal forces in the LAM, derailing the descent, was crucial.

The scientists used a three-part reconfigurable attitude control that included a “quaternion” partition control, a phase and gain stabilization filter, and a dual observer.  The former helped control the angle and angular velocity of the LAM, thereby enabling fast and stable attitude reorientation. Sloshing was resolved by the filter, which constrained the pitch, yaw and roll of the LAM, improving the robustness of the control system and helping avoid instability. Finally, the dual observer achieved better control performance by estimating and compensating for disturbances like sloshing disturbance, misalignment of center of mass, and thruster induced disturbance.

The LAM used various sensors to help navigate its descent and landing. The inclusion of multiple sensors for the same purpose improved system redundancy, which is crucial to space missions where there is no opportunity to repair a faulty sensor. But how did the Chang’e-5 detect faulty sensors and choose alternate ones? This was achieved through a process called intelligent heterogeneous sensor data fusion, where the outputs of many similar-purposed sensors were compared. If the output from one sensor was found to be vastly different, the sensor was deemed faulty and one of the other sensors would be chosen for navigation. According to Dr. Zhang, “The data fusion methods described in our work for onboard sensors, such as inertial measurement units (like gyroscopes and accelerometers) and velocimeters, have the potential to improve future aerial vehicles, both terrestrial and cosmic.”

The Chang’e-5 spacecraft returned to Earth on December 16, carrying with it the youngest lunar samples (only 1.2 billion years old!) so far ever to be obtained by humankind. The success of the Chang’e-5 mission, due in no small part to its innovative GNC system, paves the way for future space exploration missions such as asteroid landing, as well as humanity’s most daring dream – crewed space travel.