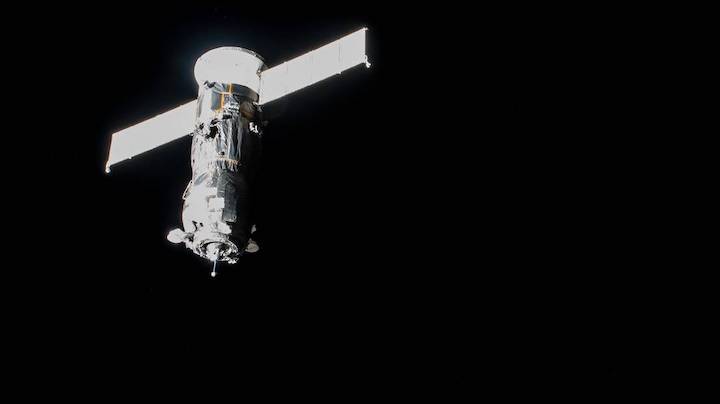 Russia's ISS Progress 78 resupply ship approaches the International Space Station for a docking to the Poisk module on July 2, 2021, two days after lifting off from the Baikonur Cosmodrome in Kazakhstan.
Credits: NASA

NASA will provide coverage as an uncrewed Russian cargo spacecraft arrives to a new port at the International Space Station this week, and as another Russian freighter launches and docks to the orbiting outpost next week.

After undocking from the station’s Poisk module, Progress 78 will back out to a distance of 120 miles from the space station for a period of just over 24 hours to allow for station keeping. The spacecraft will then make an automated docking at 12:23 a.m. Friday, Oct. 22, to the Nauka Multipurpose Laboratory Module.

The maneuver will position Progress 78 to conduct leak checks of the Nauka module’s propellant lines before they are used with the new module’s thrusters for orientation control of the station. Progress 78 arrived at the station in July and will depart in late November.

The new Progress 79 cargo craft will launch from the Baikonur Cosmodrome in Kazakhstan at 8 p.m. Wednesday, Oct. 27 (5 a.m. Thursday, Oct. 28, Baikonur time). Progress 79 launch overage on NASA TV, the agency’s website, and the NASA app will begin at 7:45 p.m.

Loaded with almost three tons of food, fuel, and supplies for the station crew, the resupply ship will dock to the aft port of the Zvezda service module at 9:34 p.m. Friday, Oct. 29. Live coverage of docking will begin at 8:45 p.m.

For more than 20 years, humans have lived and worked continuously aboard the International Space Station, advancing scientific knowledge and demonstrating new technologies, making research breakthroughs not possible on Earth. As a global endeavor, 246 people from 19 countries have visited the unique microgravity laboratory that has hosted more than 3,000 research and educational investigations from researchers in 108 countries and areas.

Get breaking news, images, and features from the space station by following @space_station and @ISS_Research on Twitter as well as the ISS Facebook and ISS Instagram accounts.

Relocation began at 23:42 UTC (7:42 PM EDT) on Wednesday when the Russian resupply spacecraft autonomously undocked from the Russian Poisk module and backed away from the station to a distance of approximately 180-190 kilometers. Progress perform station-keeping maneuvers in order to remain in the correct proximity to the space station and hold position for over 24 hours.

The spacecraft approached the Nauka multipurpose laboratory, which became a new addition to the station in July, for docking at 04:21 UTC (12:21 AM EDT) on Friday.

The Progress spacecraft now occupies the nadir port, one of two on the Nauka module.

Russian cosmonauts Pyotr Dubrov and Anton Shkaplerov were responsible for overseeing the relocation. However, the entire process was automatically controlled by Progress. Both cosmonauts have been trained to take over the redocking operation had an issue arise, but nominally, Kurs automated docking system performed without issue. 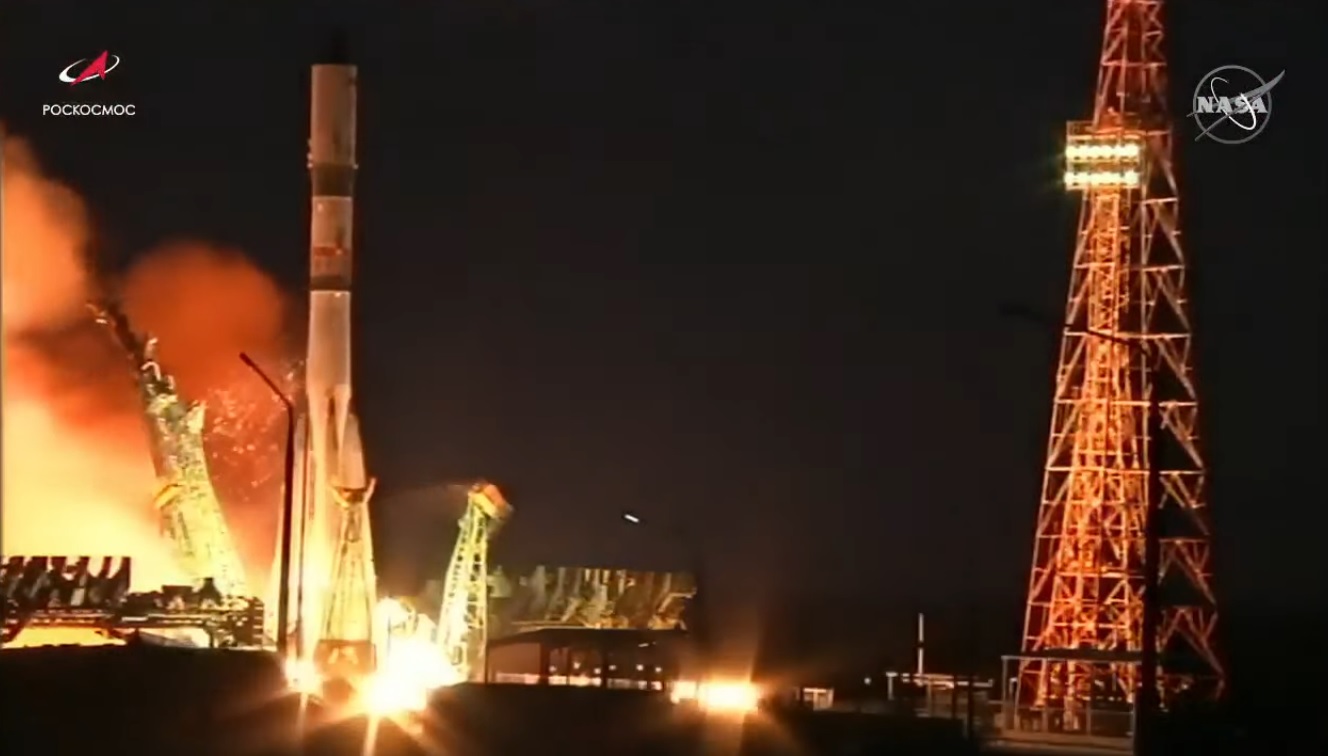 Progress MS-17 lifts off aboard Soyuz 2.1a in June – via NASA

Having been at the space station since July 2, Progress MS-17 will remain docked to the station until its permanent departure in late November. As with all Progress spacecraft, after their cargo has been used and their purpose no longer needed, the crew aboard the station will load the vehicle with spent and unwanted supplies which, once de-orbited, will burn up in the Earth’s atmosphere along with the entire spacecraft itself.

Unlike the crewed Soyuz, Progress is designed to be a disposable resupply craft.

Significantly, Progress MS-17 will undock from Nauka with its HDA-to-SSVP (Hybrid Drogue Adapter to Probe and Drogue) docking adapter ring. Currently, the nadir port’s adapter is compatible with both Soyuz and Progress vehicles. However, the port will no longer service these vehicles, and instead will be the attachment point for Russia’s Prichal module.

By Progress removing the HDA-to-SSVP ring, it will revert the docking infrastructure to HDA, an adapter that gives a wider passageway and is thus particularly useful for permanent modules. Nauka was not launched in HDA configuration in the event that Prichal did not make it to the space station, which would render the sought-after port inaccessible for Soyuz and Progress vehicles.

NM Prichal during processing – via Roscosmos

This prospect may not come to fruition in response to Russia looking at other opportunities away from the ISS this decade. Regardless, it is expected that Prichal will share servicing Soyuz vehicles with the Rassvet module, whilst Progress vehicles will dock to the Zvezda and Poisk modules.

On Wednesday, after “go” was given for undocking, Progress released a series of hooks and latches followed by the spacecraft performing thruster firings to back away from the Poisk module. Unlike typical relocations, such as the recent Soyuz MS-18, Progress distanced itself from the station well beyond the “keep out sphere” to a distance of 180-190 kilometers.

After backing away from the station, the spacecraft ensured that it maintained a precise position in space, known as station-keeping. In order to efficiently use its onboard propellant without excessive adjustments, it station keeped for over 24 hours.

On Friday, Progress closed in on the station once again, lining up with the nadir port of MLM Nauka for contact and capture with the docking port. The docking probe was captured by the docking cone, and by retracting the probe, Nauka drew the spacecraft in toward the docking system to allow for the various hooks and latches to form a tight seal.

Once MS-17 is re-docked, the crew will be able to resume using the spacecraft. 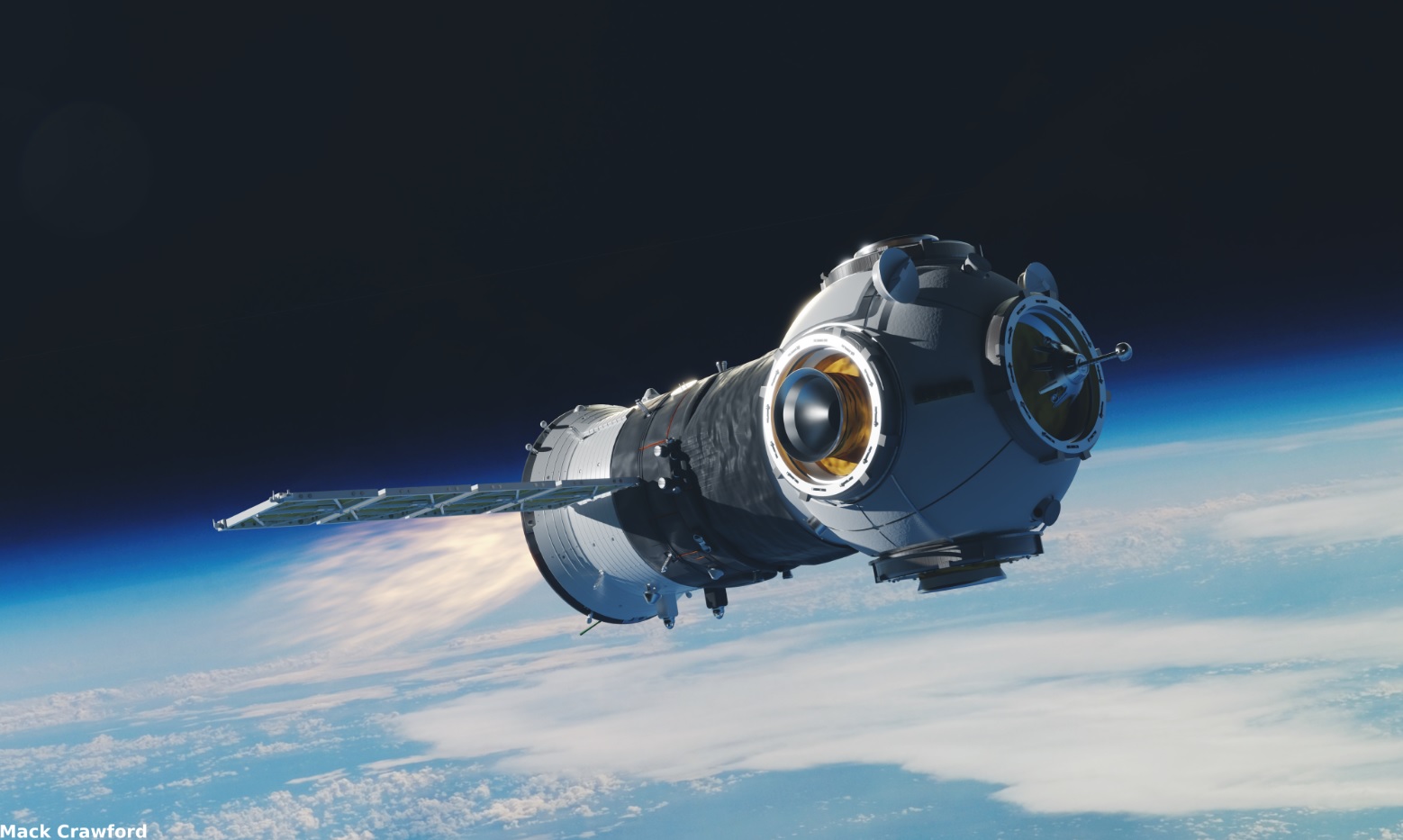 Progress’ departure will be carefully timed around the launch of Prichal due to the significance of the APAS-to-SSPV adapter currently on Nauka’s nadir port. If this was removed and Prichal failed during launch, the Russian segment would lose an important docking port for the common visitors of Soyuz and Progress. Thus, MS-17 will return when Prichal is ready to take its place.

In the meantime, Progress MS-18 will launch on October 28 at 00:00 UTC (October 27 at 8:00 PM EDT) aboard a Soyuz 2.1b from the Baikonur Cosmodrome in Kazakhstan. The spacecraft will dock to the aft port of the Zvezda module, a prime location for Progress spacecraft in order to perform ISS orbital reboosts using their main engines.

It will deliver approximately three tonnes of food, fuel, and supplies to the ISS crew. Docking is expected at 01:34 UTC on Friday, October 29 (9:34 PM EDT on Thursday, October 28).

It is currently expected that Prichal will be launched on November 24, also aboard a Soyuz 2.1b from Baikonur. Prichal will be launched with the Progress M-UM, an upgraded type of Progress specifically designed to carry Prichal to the station. After docking the new Russian segment to Nauka, Progress M-UM’s propulsion section will undock after 30 days and re-enter the atmosphere, leaving Prichal’s nadir port free.

Spacewalks are planned in 2021 and 2022 in order to fully integrate Prichal to Nauka and complete the Russian segment’s newest additions.

(Lead image: Progress MS-17 approaching to dock to the Poisk module in July – via NASA)