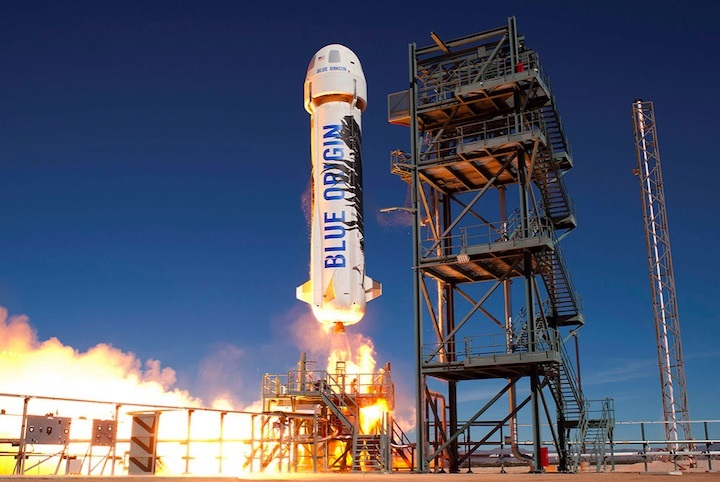 A commercial spacecraft that has been designed to launch people on brief trips into space has inspired a new creative use — as a canvas for artwork.

Uplift Aerospace has partnered with Blue Origin, the private spaceflight company founded by Amazon CEO Jeff Bezos, to paint commissioned murals on the side of Blue Origin's New Shepard spacecraft, adding an artistic flair to the astronautical endeavor.

Beginning Tuesday (Sept. 1), interested individuals can apply to bid on the murals. Those successful in their proffers will be invited to collaborate will Uplift's chosen artists to create the pieces that will fly on the exterior of the New Shepard vehicle on upcoming launches.

After the spacecraft returns to Earth, the artwork will be curated and delivered to their buyers, "who will own a piece of art and aerospace history," said Josh Hanes, owner of Uplift Aerospace.

"The idea that the artwork will be lit by distant galaxies, with Earth as a backdrop, is a beautiful visualization, and I think this characteristic will allow viewers a closer connection with the cosmos and the precious planet we call home," Hanes said in a statement, announcing the flight opportunity.

Blue Origin debuted the New Shepard in 2015 and has since flown the reusable rocket and suborbital spacecraft on 12 uncrewed test flights to date. Named after Mercury astronaut Alan Shepard, the first American to fly into space, the New Shepard capsule is designed to carry up to six people or payloads to just above 62 miles (100 kilometers), the internationally-recognized boundary between Earth's atmosphere and outer space, before descending under parachutes to the ground.

Despite the brevity of its trajectory, the New Shepard spacecraft and rocket are subjected to the stresses of the Mach 3 ascent and 3-g re-entry (three times Earth's gravitational force), which can take a toll on the exterior of both vehicles. Exterior painted markings, including Blue Origin's logo, have returned from space eroded and faded as a result.

The same is expected to happen to the commissioned art, though Uplift describes that as a feature.

"Small details of the painting will transform throughout the journey to and from space as the artwork experiences the phases of a rocket launch from the ground, through the air at Mach speeds, in the vacuum of space, and landing back on Earth," the company's website explains. "Testing by Uplift Aerospace has ensured that adhesion, integrity and relative coloration of the paints will endure the rigors of space travel."

"The Mona Lisa would not move today's viewer quite so poignantly without the telltale signs of its now centuries-old story and its emergence from the brush of a Renaissance master. Journey and story will also leave a unique and indelible mark on Uplift Aerospace's first artwork to return from space travel," Dakota Bradshaw, a museum professional, said in a statement released by Uplift.

The space-bound murals will be created for Uplift by Jeff Hein, a "living master" as recognized by the non-profit Art Renewal Center, and surrealist painter Mark Pugh. Both artists have paintings in private and public galleries around the world.

"It is thrilling to have an expression of my humanity propelled into outer space, far from our world, and toward infinite others," said Hein. "After 18 years of painting, I have been fortunate to show my work all over the world, but I've never shown in space. It's truly amazing."

The murals will not only be transformed by their launch, but will be shaped by their medium — the rocket, itself — both literally and figuratively, said Pugh.

"Painting with a classical approach on the side of a rocket is an exciting way to merge the traditional with the modern," Pugh said. "So much creativity goes into engineering these incredible machines, so to be able to have a piece of them displayed as an element in a work of art, particularly one that has spent time directly exposed to elements outside the Earth's atmosphere, makes this truly a valuable piece of history, and I'm honored to be a part of it."

Due to the murals being applied directly to the spacecraft's exterior panels, Uplift will screen and approve bidders in order to comply with U.S. export controls. The specific location of the artwork on the New Shepard, the size of the murals and bidding amounts (i.e. price) will be disclosed to applicants once they are approved.

While perhaps a first as a commercial offer for art applied to the outside of a launch vehicle, the Uplift murals follow a brief history of painted rockets. In 1992, for example, German pop artist Andreas Hoge (also known by the pseudonym Andora) was commissioned to decorate the body of a Russian Proton booster. His artwork, though, was not recovered. 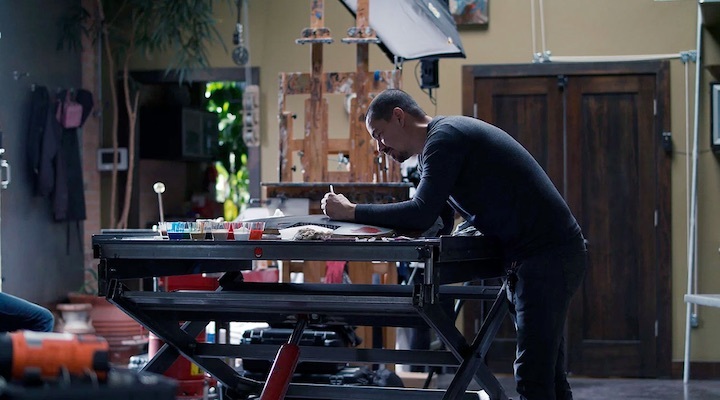 Artist Jeff Hein, working in his studio, tests the paints and creative process to apply a mural to the exterior panel on a Blue Origin New Shepard spacecraft. (Uplift Aerospace)