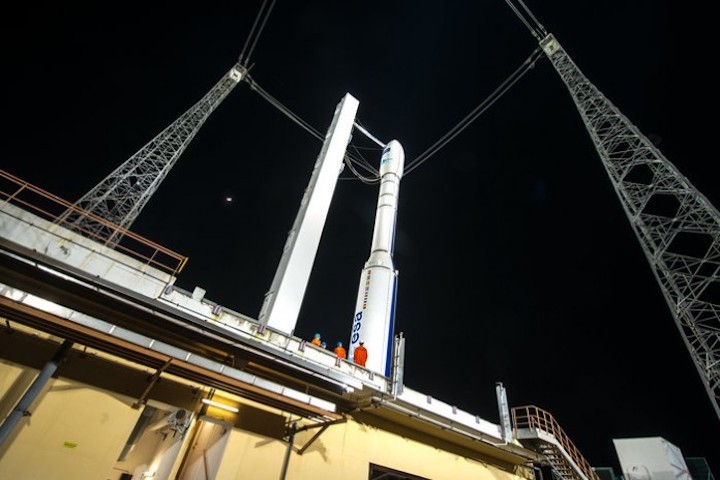 An Israeli developed micro-laboratory was successfully launched early Thursday morning into space, where it will perform innovative scientific-medical experiments.

The launch on a Vega launcher took place from the European space base in French Guinea, carrying a total of 53 satellites, most of them miniatures, from 13 countries.

The launch was delayed several times because of the Coronavirus (COVID-19) pandemic.

The nanosatellite, a partnership of the Israeli Space Agency (ISA) in the Ministry of Science and Technology and the Italian Space Agency, consists of a tiny laboratory.

The laboratory, developed by Israel’s SpacePharma, will conduct four experiments in the fields of medicine, biology and chemistry that will provide new and groundbreaking information on diseases and their prevention.

The DIDO-3 is a laboratory the size of a shoebox and weighs only 2.3 kilos, enabling for experiments to be performed cheaply, on a small scale and without human contact.

The miniature laboratory is operated autonomously and allows each scientist to conduct the experiment independently and with full remote control.

Each experiment involves two researchers, one Israeli and one Italian. The Israeli researchers are from the Technion in Haifa, Sheba Medical Center in Tel Aviv and the Hebrew University in Jerusalem.

The experiments include the prevention of infections, drug development, prevention of antibiotic resistance and delaying of the aging process.

Looking ahead to when space tourism will become a reality, Sheba’s experiment will also help to calculate the risks of antibiotic-resistant infectious diseases in humans traveling to space.

Space is an optimal environment for conducting biological and chemical experiments, and specifically for the development of new drugs. For example, bacteria in outer space develop rapid drug resistance due to the special stress conditions – and a drug that has been shown to be effective against bacteria in space is likely to easily outperform terrestrial bacteria of the same strain.

In 2018, the company made history when it became the first Israeli company to launch cargo into space and safely return it to Earth. The lab was launched in 2017 aboard a launcher and docked at the International Space Station. In March 2018, the lab was successfully retrieved from the Pacific Ocean.