NASA’s flying observatory, the Stratospheric Observatory for Infrared Astronomy, has returned to science operations with a new series of flights designed to study the chemistry of galaxies.

SOFIA flights were suspended on March 19 in response to the COVID-19 pandemic. With the resumption of flights out of SOFIA’s base at NASA’s Armstrong Flight Research Center in Palmdale, California, new procedures are in place to ensure the health and safety of staff while enabling the observations of celestial targets visible from the Northern Hemisphere. SOFIA started by flying two flights beginning Aug. 17, to allow the team time to evaluate and adjust the new procedures, and now plans to return to its regular observing schedule with about four flights each week. 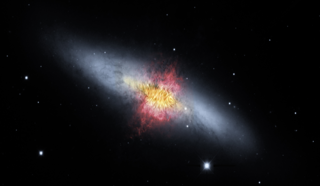 Composite image of the Cigar Galaxy (also called M82), a starburst galaxy about 12 million light-years away in the constellation Ursa Major. The magnetic field detected by SOFIA, shown as streamlines, appears to follow the bipolar outflows (red) generated by the intense nuclear starburst. The image combines visible starlight (gray) and a tracing of hydrogen gas (red) from the Kitt Peak Observatory, with near-infrared and mid-infrared starlight and dust (yellow) from SOFIA and the Spitzer Space Telescope.
Credits: NASA/SOFIA; NASA/JPL-Caltech
https://www.nasa.gov/feature/weighing-galactic-wind-provides-clues-to-evolution-of-galaxies

“We are so thrilled to begin observations again and very thankful to the scientists, operations staff and pilots who are returning us to flight,” said Margaret Meixner, SOFIA’s science mission operations director at the Universities Space Research Association. “In this flight series, SOFIA is studying the chemistry that influences the creation and evolution of galaxies across cosmic history. We cannot wait to see the data.”

The team will explore distant galaxies to learn how black holes control the galaxies’ growth and how quickly stars form in them. To further understand how stars are born, the team will examine how magnetic fields affect the celestial clouds that incubate natal stars.

In June, SOFIA’s annual deployment to Christchurch, New Zealand was deemed not feasible given ongoing concerns related to the pandemic. Instead a new schedule was coordinated to take advantage of observing opportunities from California. New safety procedures are designed to meet NASA and Federal Aviation Administration requirements for safety and return to on-site work. New procedures include flying a minimal number of mission crew, social distancing and personal protective equipment for staff, and extra sanitation of the aircraft during and in-between flights.

SOFIA is a Boeing 747SP jetliner modified to carry a 106-inch diameter telescope. It is a joint project of NASA and the German Aerospace Center, DLR. NASA’s Ames Research Center in California’s Silicon Valley manages the SOFIA program, science and mission operations in cooperation with the Universities Space Research Association headquartered in Columbia, Maryland, and the German SOFIA Institute (DSI) at the University of Stuttgart. The aircraft is maintained and operated from NASA’s Armstrong Flight Research Center Hangar 703.