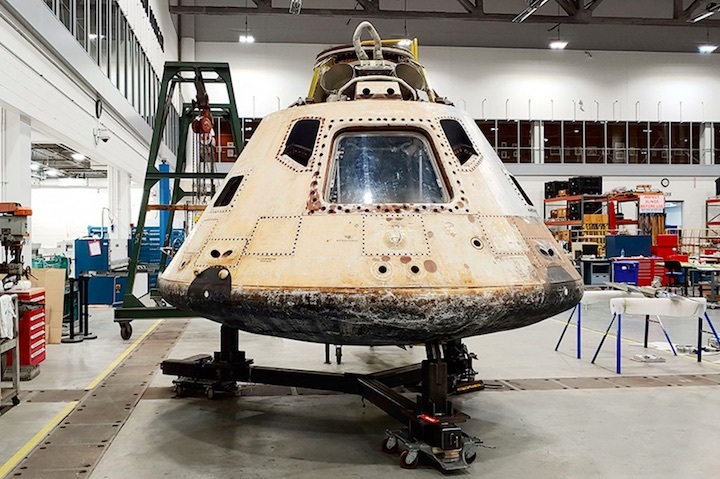 A historic NASA spacecraft will soon leave the Smithsonian for the Sooner State.

The Apollo command module that was flown by the third and last astronaut crew to live on board the United States' first space station is set to go on display in Oklahoma. The Skylab 4 capsule was previously on exhibit for more than 40 years at the Smithsonian's National Air and Space Museum in Washington, D.C.

"Today our SpaceWorks crew is at the Oklahoma History Center to begin the installation of the display case for the Skylab 4 command module (CM)," the Cosmosphere space museum in Kansas announced on its social media accounts on Thursday (Aug. 27), referencing its artifact restoration, replication and design division. "The rest of the case will be installed when the CM arrives in September."

The SpaceWorks team fabricated both the display case and the mounting base for the Skylab 4 spacecraft that will be used at the Oklahoma History Center (OHC) in Oklahoma City.

"Things are moving at the OHC!" the history center wrote on Instagram, captioning photos of the case's metal framework being moved into the center by forklift.

The news of the spacecraft's pending move came the day after the commander of NASA's Skylab 4 mission, Gerald "Jerry" Carr, died at the age of 88. Carr lifted off aboard the command module with Ed Gibson and William "Bill" Pogue, a native of Oklahoma, on Nov. 16, 1973.

Carr, Gibson and Pogue's 84-day stay on the Skylab orbital workshop marked the most time that humans had lived and worked in space, a world record held for four years. The command module still holds the record for the longest flight by an American-launched, crewed spacecraft. The crew and capsule splashed down and were recovered from the Pacific Ocean on Feb. 8, 1974.

The Skylab 4 command module will be the centerpiece of the OHC's new exhibit, "From Launch to Landing: Oklahomans and Space," located in the E.L. and Thelma Gaylord Special Exhibit Gallery on the north end of the center's first floor. A photo shared by the Cosmosphere showed that the capsule will be surrounded by descriptive plaques dedicated to each of the Oklahoma-born astronauts, large reproductions of their mission patches and other artifacts, including a large model of the space shuttle hung from the ceiling.

The Skylab 4 command module was transferred by NASA to the Smithsonian in 1975. The next year it debuted on display with the opening of the National Air and Space Museum, where it was suspended above visitors' heads as part of the "Apollo to the Moon" exhibition. It remained on display until December 2018, when its gallery was closed as part of an extensive, still-ongoing renovation.

In March 2019, the capsule was lowered to the ground and then three months later was moved out of the building for its transport to the Steven F. Udvar-Hazy Center in northern Virginia. Today, it sits in the Udvar-Hazy restoration hangar, awaiting its move to Oklahoma.

The Skylab 4 command module will be the second spacecraft to be displayed at the Oklahoma History Center. The OHC previously exhibited the 1965 Gemini 6 capsule, also on loan from the Smithsonian. In 2018, after 14 years in Oklahoma City, the spacecraft was moved to Weatherford, Oklahoma, the hometown of Gemini 6 astronaut Thomas Stafford and the location of its current exhibit at the Stafford Air and Space Museum.