The solidification of the inner core may have strengthened Earth's magnetic field. 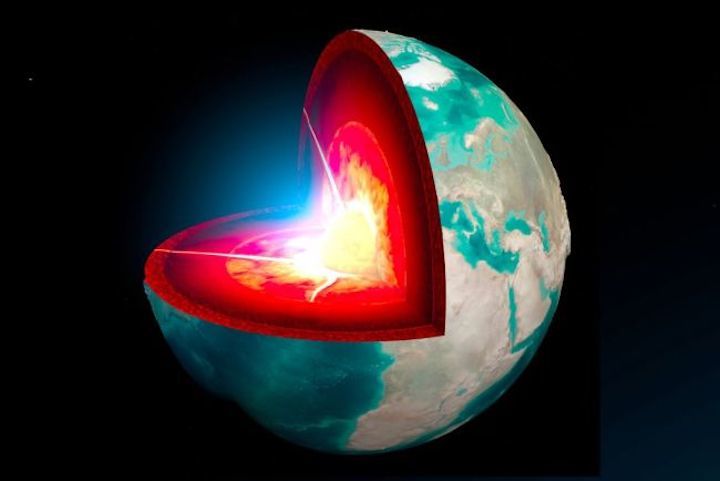 Modern Earth is like a layer cake, with a solid outer crust, a hot, viscous mantle, a liquid outer core and a solid inner core. That solid inner core is growing slowly as the liquid iron in the core cools and crystallizes. This process helps power the churning motion of the liquid outer core, which in turn creates the magnetic field that surrounds Earth and helps protect the planet from harmful cosmic radiation.

In other words, the inner core is pretty important.

But not much is known about the history of this 1,500-mile-wide (2,442 kilometers) iron ball. Estimates of its age have ranged from half a billion years to more than 4 billion years, almost as old as 4.5-billion-year-old Earth itself. Now, researchers have squeezed a miniscule piece of iron between two diamonds and blasted it with lasers to arrive at a new estimate of 1 billion to 1.3 billion years old — a date range that coincides with a measurable strengthening of the Earth's magnetic field that happened around the same time.

Earth's magnetic field is powered by what scientists call the "geodynamo." That's the movement of the iron-rich outer core, which turns the planet into a giant, if somewhat messy, magnet. The geodynamo is responsible for Earth's North Poleand South Pole and the invisible shield of magnetism that deflects and traps charged particles flowing from the sun. These particles would otherwise slowly strip Earth of its atmosphere.

Lin and his team wanted to use experimental evidence to pin down the energy from each of these sources. Knowing the amount of energy would allow them to estimate the age of the inner core.

To do this, the researchers recreated the conditions of the core on a tiny scale. They heated a piece of iron a mere 6 microns thick (about the same as the length of a red blood cell) to temperatures up to 4,940 degrees Fahrenheit (2,727 degrees Celsius), and squeezed the sample between two diamonds to match the extreme pressures at Earth's core. They then measured the conductivity of the iron under these conditions.

This conductivity measurement allowed the researchers to calculate the thermal cooling of the core that is available to power the geodynamo. They found that the geodynamo drew on about 10 terawatts of energy from the cooling core — just over a fifth of the amount of heat the Earth dissipates into space from its surface (46 terawatts, Live Science previously reported).

This estimate isn't as young as some estimates, such as one published in 2016 in the journal Nature that used similar methods but found the core was a mere 700 million years old. Lin said the new experiment used more reliable ways of handling the pressures and temperatures generated on the core, making that younger estimate unlikely.

Ancient magnetic rocks revealed that the magnetic field suddenly strengthened between 1 billion and 1.5 billion years ago, a 2015 study in the journal Nature found. The new age lines up nicely with that evidence, as the crystallization of the inner core would have provided a "boost" to the magnetic field, Lin said.

There are still questions about the way heat moves around in the core, Lin said. Unlike the sample they tested, the core isn't just iron — it also contains lighter elements such as carbon, hydrogen, oxygen, silicon and sulfur. But the proportions of these light elements are unknown, making it difficult to know how they change the conductivity of the inner core. That's what Lin and his team are working on now.

"We are trying to understand how the existence of those light elements would actually affect the thermal transport properties of iron at such high-pressure, high temperature conditions," Lin said.

The researchers reported their findings Aug. 13 in the journal Physical Review Letters.