An international team of astronomers using the Atacama Large Millimeter/submillimeter Array (ALMA) found a peculiar dust ring system around the young triple star GW Orionis. The system has three large, misaligned rings with sufficient dust for planet formation. The misaligned rings might have been formed by a hidden planet between the rings, which would provide a clue to understand planet formation around a multiple star system. 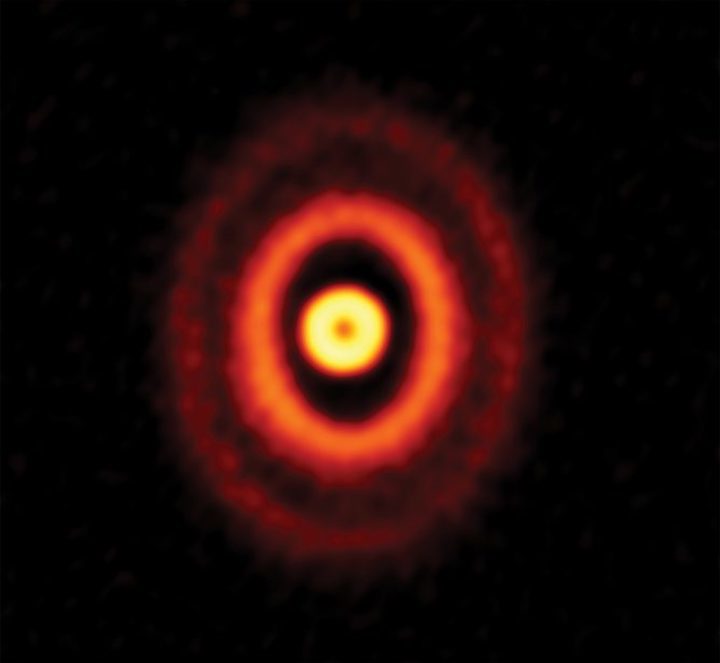 ALMA image of the protoplanetary disk around the triple young star GW Orionis. Three rings are clearly seen in the image. The innermost ring looks almost circular because it is viewed face-on, but the two outer rings are viewed at an angle and appear oval. The central triple stars are not visible in this image.
Credit: ALMA (ESO/NAOJ/NRAO), Bi et al., NRAO/AUI/NSF, S. Dagnello

The Sun is a single star, while many stars were formed in sets of two or more. Astronomers have found dozens of planetary systems around multiple-stars. However, no planets have ever been found around triple stars.

To examine the possibility of planets formed around triple stars, the international team of astronomers observed a young triple star system GW Orionis (Ori), 1300 light-years away from the Earth. GW Ori is composed of three stars; stars A and B with a separation of 1 astronomical unit (au), comparable with the distance between the Sun and the Earth, and the third star C with a separation of 8 au.

The ALMA observations revealed that GW Ori is surrounded by three rings made of small dust particles. The radii of the rings are 46, 188, and 336 au. Comparing to the fact that the size of the orbit of Neptune, the outermost planet in our Solar System, is 30 au, you can see how the rings of GW Ori are huge. There have been many rings imaged around young stars, but the outer ring of GW Ori is the largest ever.

The team estimated that the dust masses of the rings are 75, 170, and 245 Earth masses. “Each ring contains enough mass to form seeds of giant planets,” says Takayuki Muto, a member of the research team and an astronomer at Kogakuin University in Japan.

The ALMA image of GW Ori shows another interesting feature. The innermost ring is greatly inclined against the outer two rings. “We were surprised to see the strong misalignment of the inner ring,” says Jiaqing Bi of the University of Victoria in Canada, and leader of the team that published their results in The Astrophysical Journal Letters. “But the strange warp in the disk is confirmed by a twisted pattern that ALMA measured in the gas of the disk.”

The team performed a computer simulation to investigate how the gravity of the central triple star affects the rings. “Our simulations show that the gravitational pull from the triple stars alone cannot explain the observed large misalignment. We think that the presence of a planet between these rings is needed to explain why the disk was torn apart,” says a team member Nienke van der Marel of the University of Victoria. “This planet has likely carved a dust gap and broken the disk at the location of the current inner and outer rings,” she adds.

“Astronomers have long discussed how planets are formed around multiple stars,” explains Muto.” This observation paves the way to explore planet formation around a triple star system where gravitational effects are more complicated than around twin stars. I believe that research on the diversity of exoplanets will continue to make progress in the future.”

Independently of Bi’s team, a team of astronomers led by Stefan Kraus from the University of Exeter in the UK observed GW Ori with ALMA and the European Southern Observatory’s Very Large Telescope (VLT). Near infrared observation with VLT showed for the first time that the innermost ring casts a shadow on the outer rings, which is clear evidence of disk misalignment. Kraus and his colleagues also performed a computer simulation and suggest that the triple star system can create misaligned rings, without gravitational assistance from planets. The two teams have different theories for the origin of the misaligned rings, but no conclusions have been reached so far. Nevertheless, GW Ori is a precious example to understand planet formation in the complex gravitational environment around multiple stars. 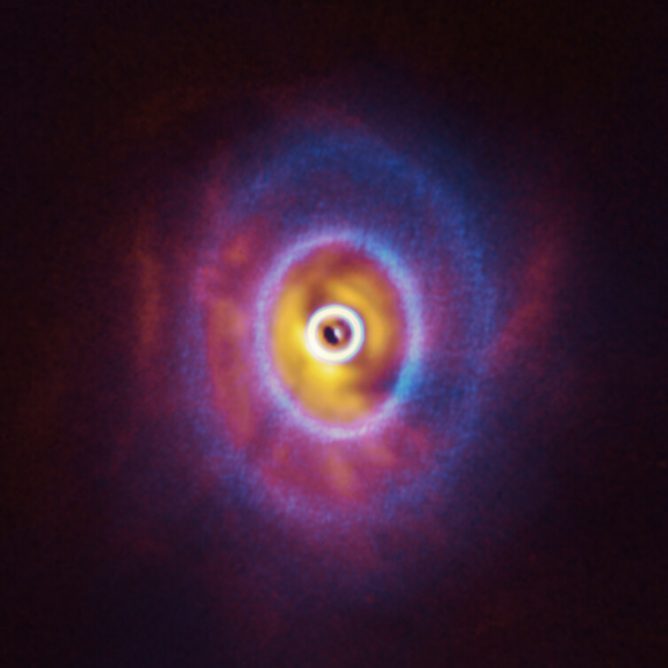 ALMA and ESO VLT composite image of GW Ori. Dust distribution revealed with ALMA is shown in blue and near infrared light caught with VLT is shown in orange. The shadow of the innermost ring falls on the rest of the disk extending out from the center to the lower left and the top.
Credit: ALMA (ESO/NAOJ/NRAO), ESO/Exeter/Kraus et al. 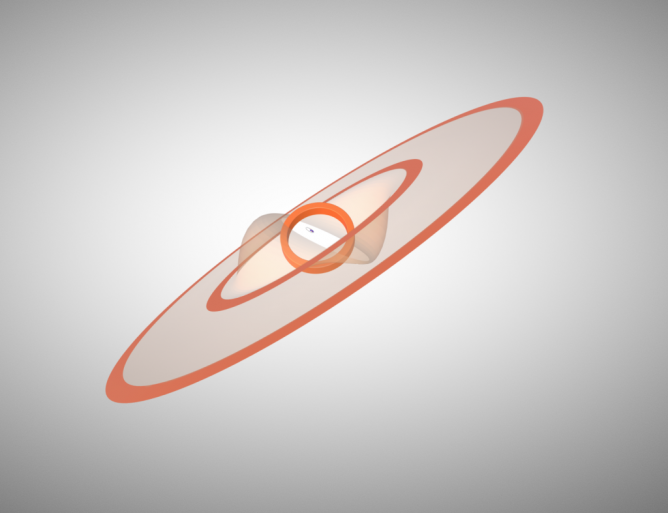 Schematic image of the protoplanetary disk around GW Ori. Triple young stars are located in the center and are surrounded by three rings. The innermost ring is greatly inclined against the orbital plane of the central stars and outer rings. The transparent surfaces correspond to the lower-density dust filaments that connect the rings and that dominate the emission in the scattered light seen with VLT.
Credit: Kraus et al., 2020; NRAO/AUI/NSF

Paper and Research Team
These observation results are presented in J. Bi et al. “GW Ori: Interactions between a Triple-star System and Its Circumtriple Disk in Action” in the Astrophysical Journal Letters published on May 20, 2020. The independent results are presented in S. Kraus et al. “A triple star system with a misaligned and warped circumstellar disk shaped by disk tearing” in Science published on September 3, 2020.