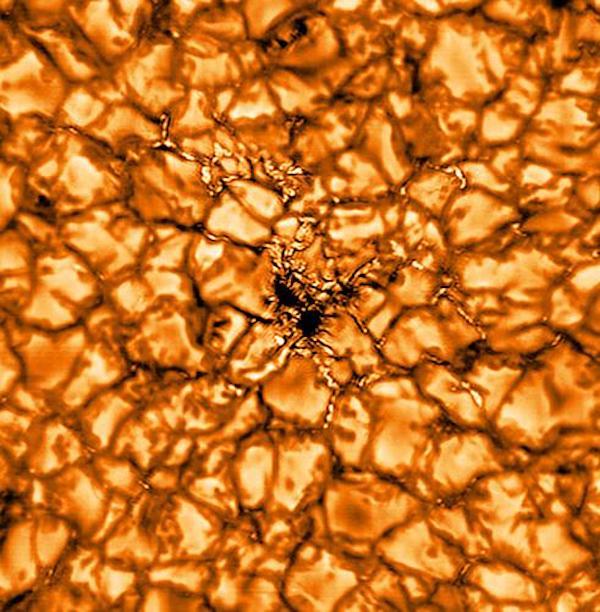 The Sun is our star and has a profound influence on our planet, life, and civilization. By studying the magnetism on the Sun, we can understand its influence on Earth and minimize damage of satellites and technological infrastructure. The GREGOR telescope allows scientists to resolve details as small as 50 km on the Sun, which is a tiny fraction of the solar diameter of 1.4 million km. This is as if one saw a needle on a soccer field perfectly sharp from a distance of one kilometer.

"This was a very exciting, but also extremely challenging project. In only one year we completely redesigned the optics, mechanics, and electronics to achieve the best possible image quality." said Dr. Lucia Kleint, who led the project and the German solar telescopes on Tenerife. A major technical breakthrough was achieved by the project team in March this year, during the lockdown, when they were stranded at the observatory and set up the optical laboratory from the ground up. Unfortunately, snow storms prevented solar observations. When Spain reopened in July, the team immediately flew back and obtained the highest resolution images of the Sun ever taken by a European telescope.

Prof. Dr. Svetlana Berdyugina, professor at the Albert-Ludwig University of Freiburg and Director of the Leibniz Institute for Solar Physics (KIS), is very happy about the outstanding results: "The project was rather risky because such telescope upgrades usually take years, but the great team work and meticulous planning have led to this success. Now we have a powerful instrument to solve puzzles on the Sun." The new optics of the telescope will allow scientists to study magnetic fields, convection, turbulence, solar eruptions, and sunspots in great detail. First light images obtained in July 2020 reveal astonishing details of sunspot evolution and intricate structures in solar plasma.

Telescope optics are very complex systems of mirrors, lenses, glass cubes, filters and further optical elements. If only one element is not perfect, for example due to fabrication issues, the performance of the whole system suffers. This is similar to wearing glasses with the wrong prescription, resulting in a blurry vision. Unlike for glasses, it is however very challenging to detect which elements in a telescope may be causing issues. The GREGOR team found several of those issues and calculated optics models to solve them. For example, astigmatism is one of such optical problems, which affects 30-60% people's vision, but also complex telescopes. At GREGOR this was corrected by replacing two elements with so-called off-axis parabolic mirrors, which had to be polished to 6 nm precision, about 1/10000 of the diameter of a hair. Combined with several further enhancements the redesign led to the sharp vision of the telescope. A technical description of the redesign was recently published by the Astronomy & Astrophysics journal in a recent article led by Dr. L. Kleint.

European researchers have access to observations with the GREGOR telescope through national programs and a program funded by the European commission. New scientific observations are starting in September 2020.

Albert-Ludwig University Freiburg founded in 1457 offers undergraduate and graduate studies in all important disciplines today. The Leibniz Institute for Solar Physics (KIS) located in Freiburg is a public foundation and a member of the Leibniz Association. It carries out fundamental research on the Sun and other stars.