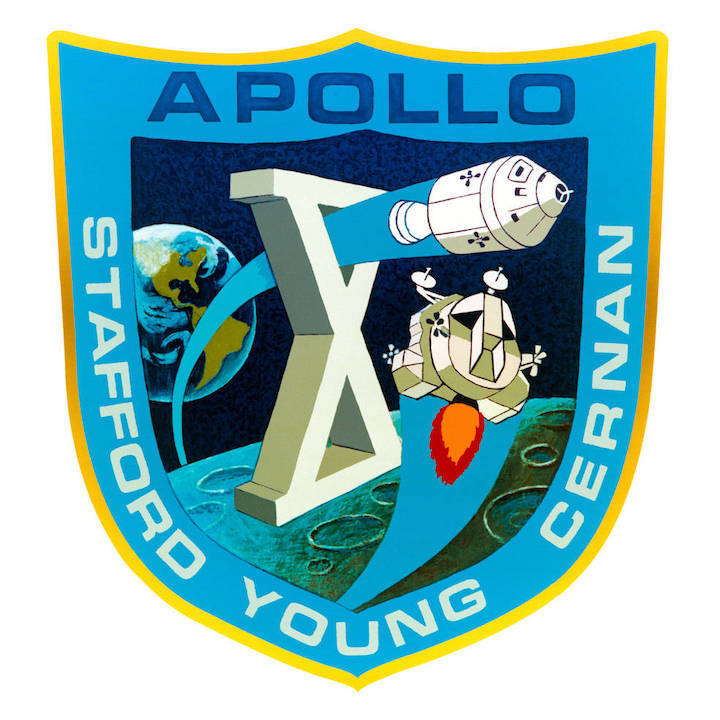 As Commander Thomas P. Stafford stated during a preflight press conference, Apollo 10 was planned to “sort out all the unknowns” to make the Moon landing possible. Stafford, Command Module Pilot (CMP) John W. Young, and Lunar Module Pilot (LMP) Eugene A. Cernan, were strapped into their Command Module (CM) perched atop a Saturn V rocket and lifted off precisely on time at 12:49 PM EDT on May 18, 1969. Their launch was the first from Pad B at Kennedy Space Center’s (KSC) Launch Complex 39. Their mission was a dress rehearsal for the lunar landing mission, a goal President John F. Kennedy set for the nation eight years earlier. Among the spectators on hand to observe the historic launch were Vice President Spiro T. Agnew, former Vice President Hubert H. Humphrey, and King Baudouin and Queen Fabiola of Belgium. 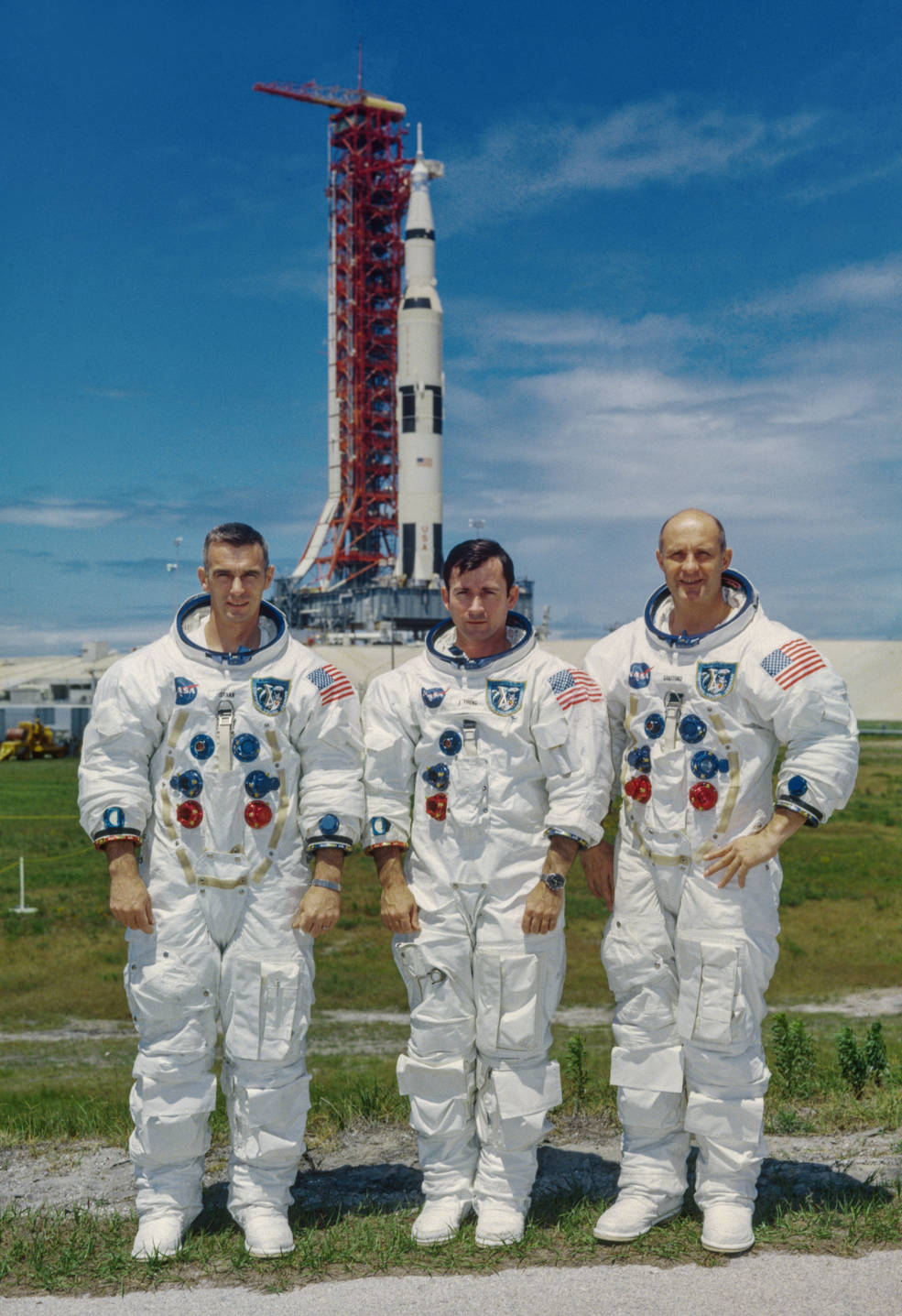 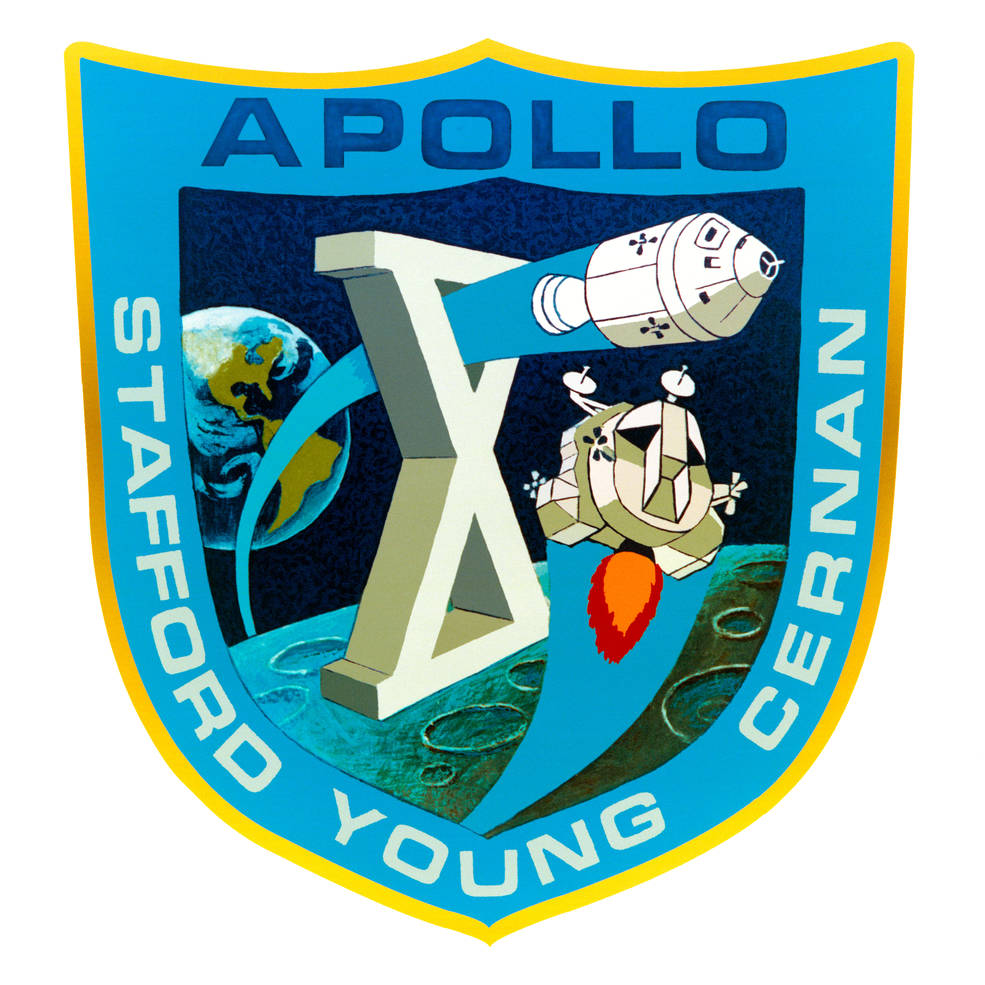 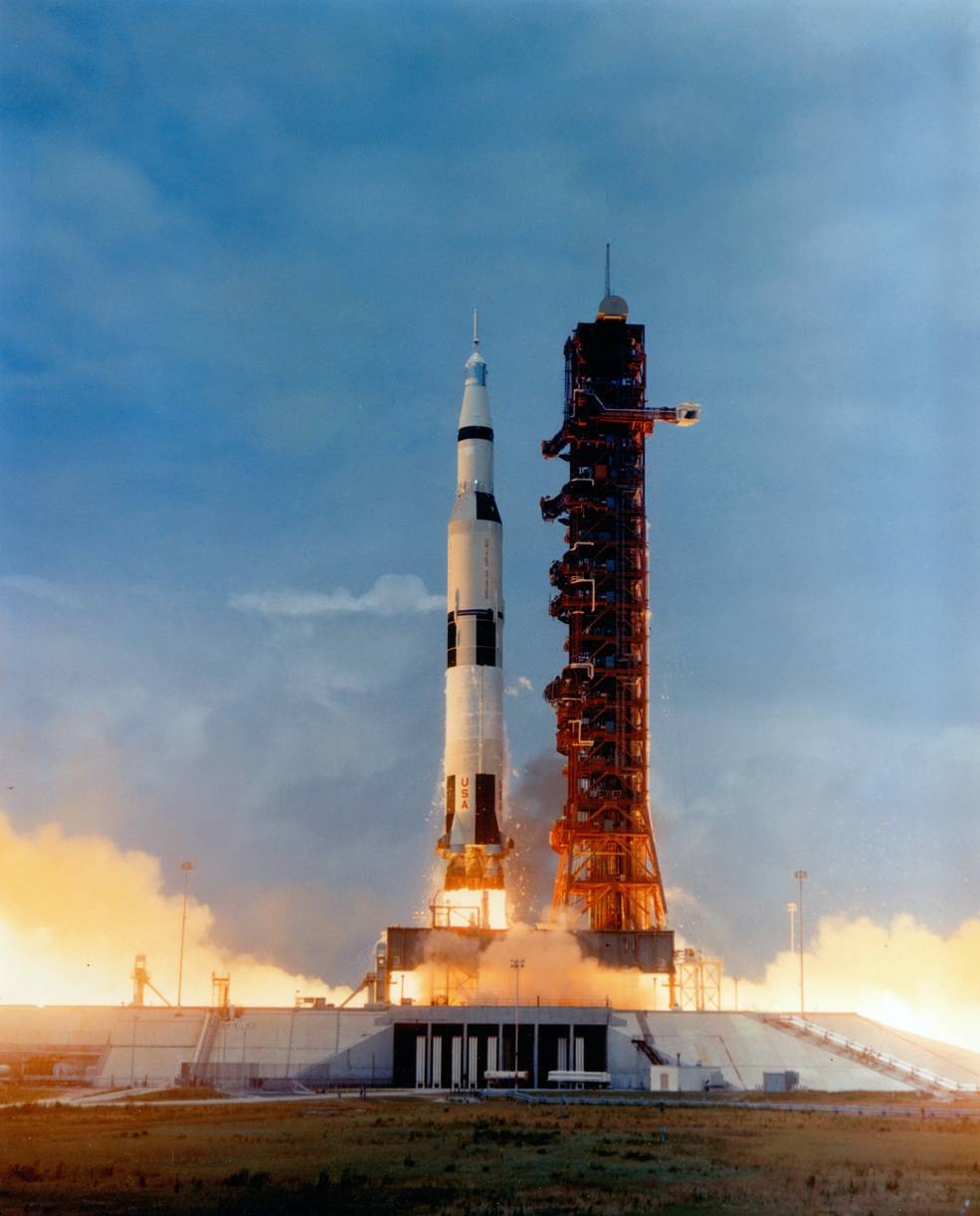 Three and a half miles away, in the Launch Control Center’s Firing Room 3, controllers had monitored the countdown and the first few seconds of the liftoff. As the rocket cleared the launch tower, Mission Control at the Manned Spacecraft Center (MSC), now the Johnson Space Center in Houston, took over monitoring the flight. There, three teams of controllers working in eight-hour shifts watched over all aspects of the mission until splashdown. Flight Directors Glynn S. Lunney and Gerald D. Griffin led the first shift, Milton L. Windler the second, and M.P. “Pete” Frank the third. The capsule communicator, or Capcom, the astronaut in Mission Control who spoke directly with the crew, during the launch was Charles M. Duke. The other Capcoms during the mission were Joe H. Engle, Jack R. Lousma, and Bruce McCandless. Apollo 10 backup CMP Donn F. Eisele and backup LMP Edgar D. Mitchell also briefly took over Capcom duties during the mission. 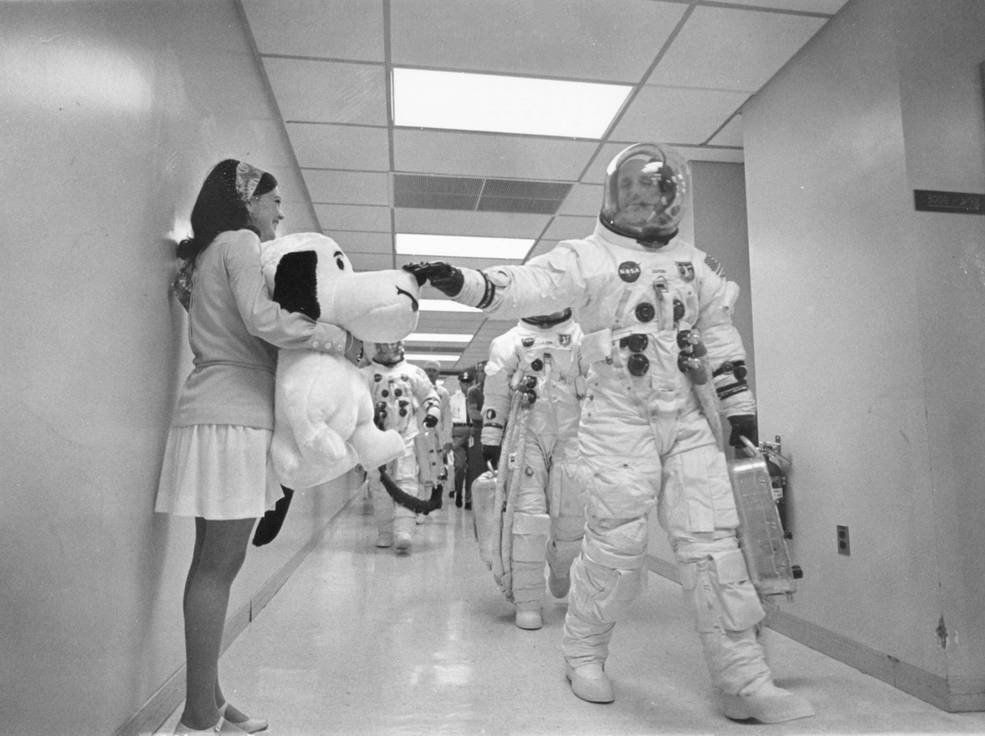 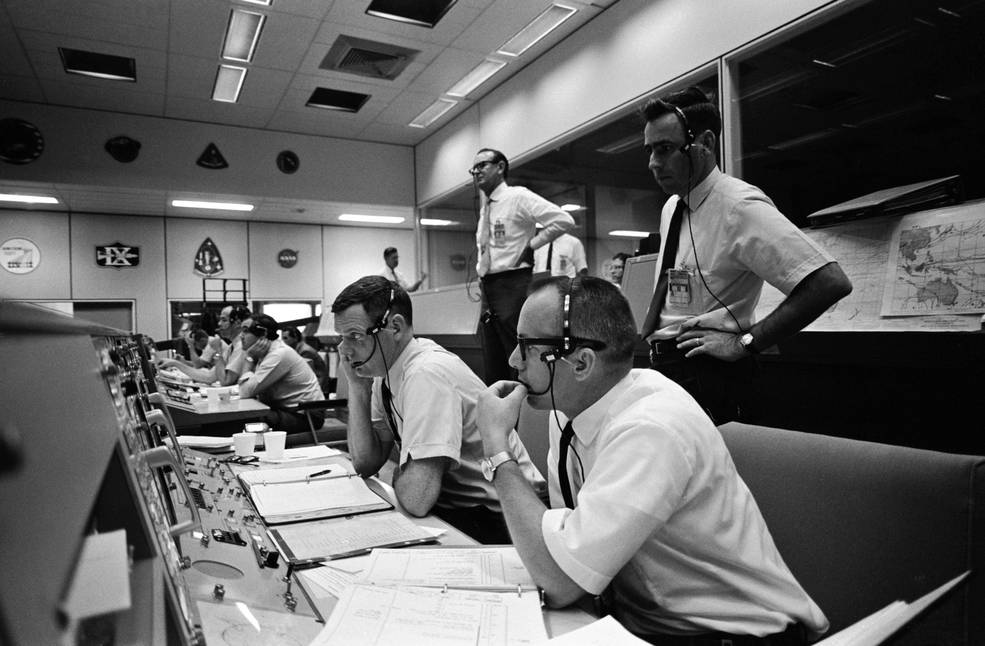 Left: Apollo 10 astronauts (front to back) Stafford, Young, and Cernan preparing to leave the Manned
Spacecraft Operations Building on their way to the launch pad. Right: Mission Control in Houston during
the first day of the Apollo 10 mission: seated in foreground left to right are Flight Directors Lunney and Griffin.

The three stages of the Saturn V placed the Apollo 10 spacecraft, at 98,273 pounds the heaviest ever launched, into a temporary parking orbit around the Earth, still attached to its S-IVB third stage. Two and a half hours later, after the ground and crew verified that all systems aboard the spacecraft were functioning normally, Duke called up, “10, you’re go for TLI,” the Trans-Lunar Injection. The S-IVB fired for 5 minutes and 43 seconds, adding more than 7,000 miles per hour to the spacecraft’s velocity, enough to send Apollo 10 toward the Moon. The engine burn was so precise that it exceeded the expected velocity increase by a mere 0.4 mile per hour! With such a precise flight path, only one of the planned four midcourse corrections were needed. 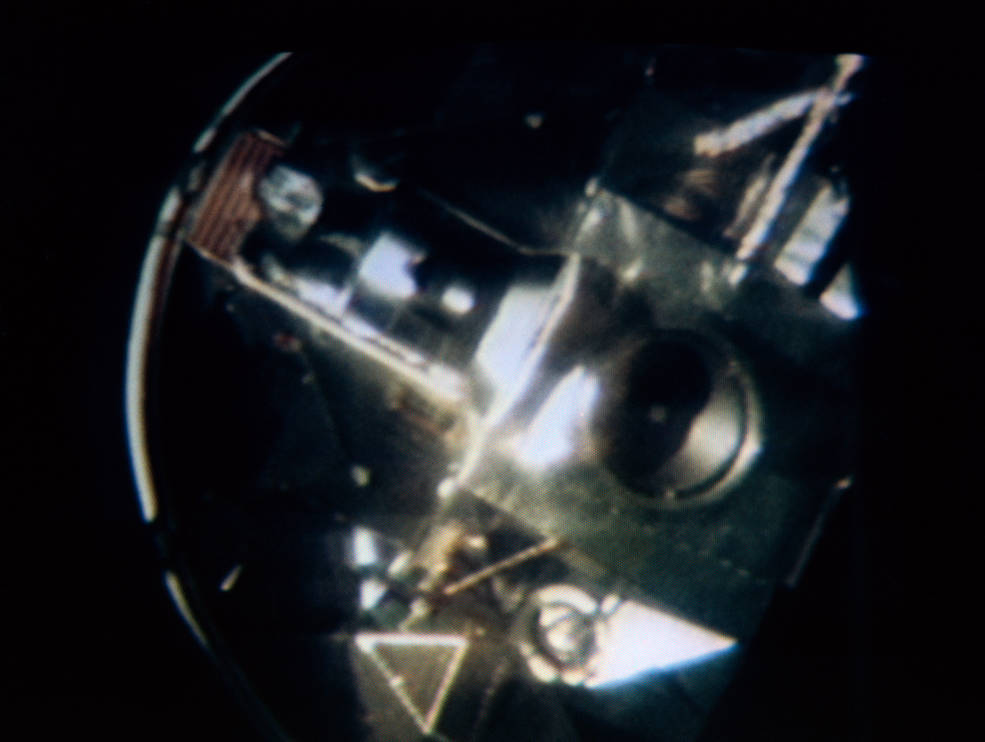 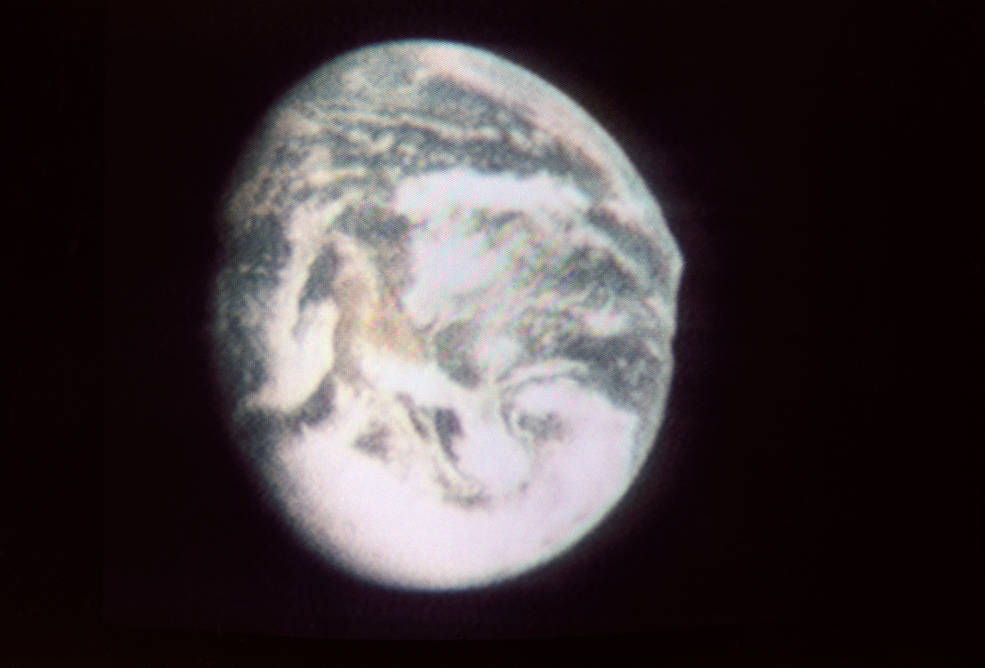 Left: The crew broadcast live color television images of Snoopy during the Transposition and
Docking Maneuver. Right: View of the Earth during a live color TV broadcast.

To facilitate communications when the two spacecraft were flying independently, the crew designated their CM Charlie Brown and the Lunar Module (LM) Snoopy, after characters in the Peanuts© comic strip by Charles M. Schulz. Thirty minutes after the TLI burn, the crew separated Charlie Brown from the S-IVB, with Snoopy still snuggled atop the third stage. Young guided Charlie Brown about 150 feet away, turned the spacecraft around, then flew it to dock with Snoopy, completing the transposition and docking maneuver. Viewers received the first color TV images from space, of the S-IVB and Snoopy as Young brought Charlie Brown in for the docking. Duke exclaimed, “It’s looking great!  The resolution is fantastic!” This first color TV transmission lasted 22 minutes, and resumed about 30 minutes later as springs ejected Snoopy, firmly docked with Charlie Brown, from the S-IVB, with Stafford exclaiming, “Snoopy’s coming out of the doghouse.” By this time, Apollo 10 was more than 13,000 miles away from Earth, but its velocity was decreasing as the home planet’s gravity inexorably tugged at the spacecraft. 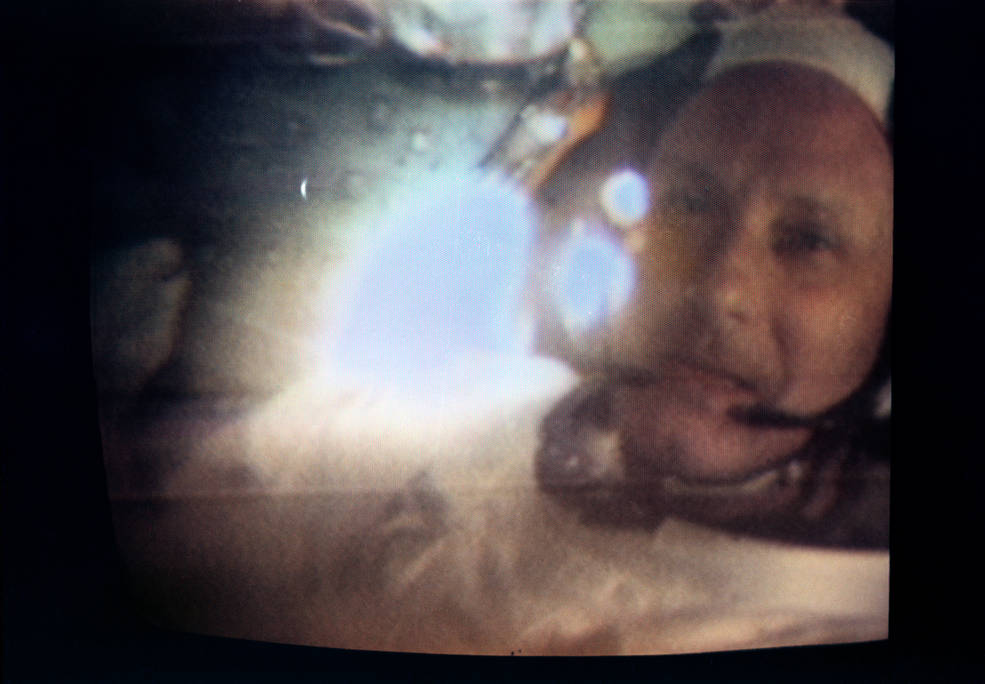 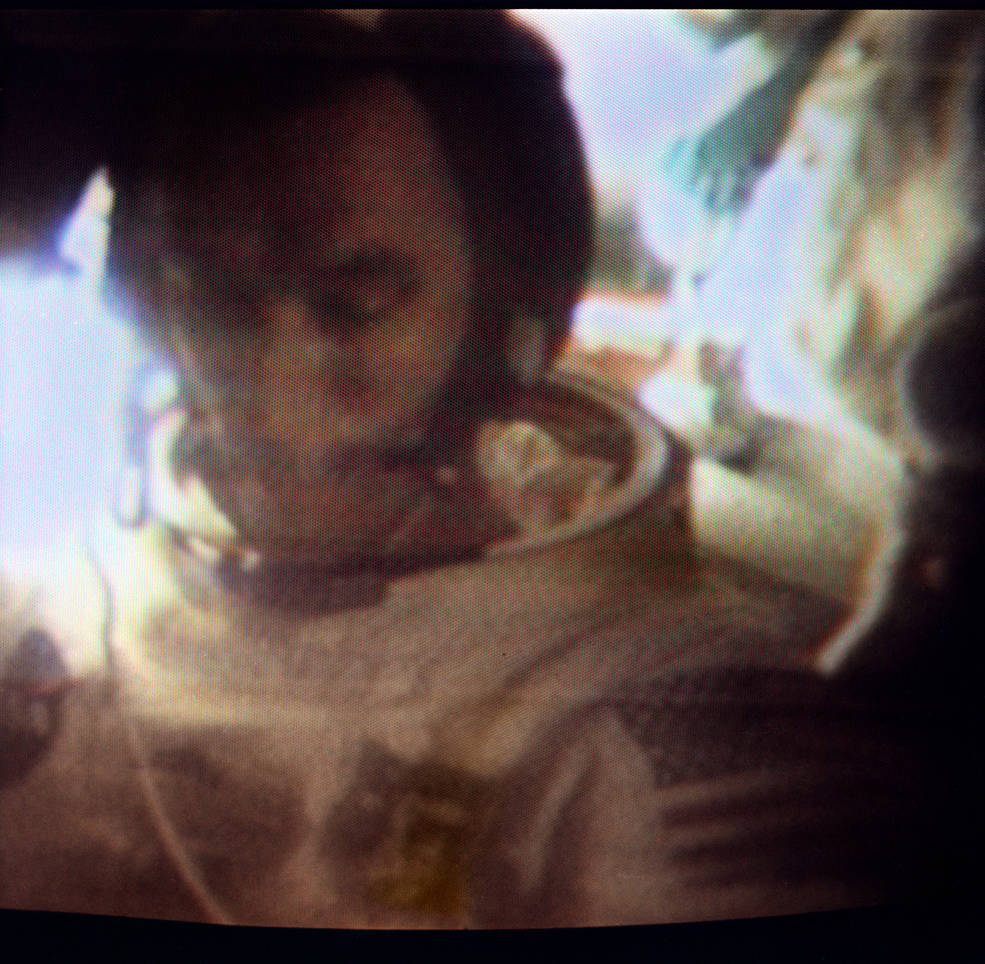 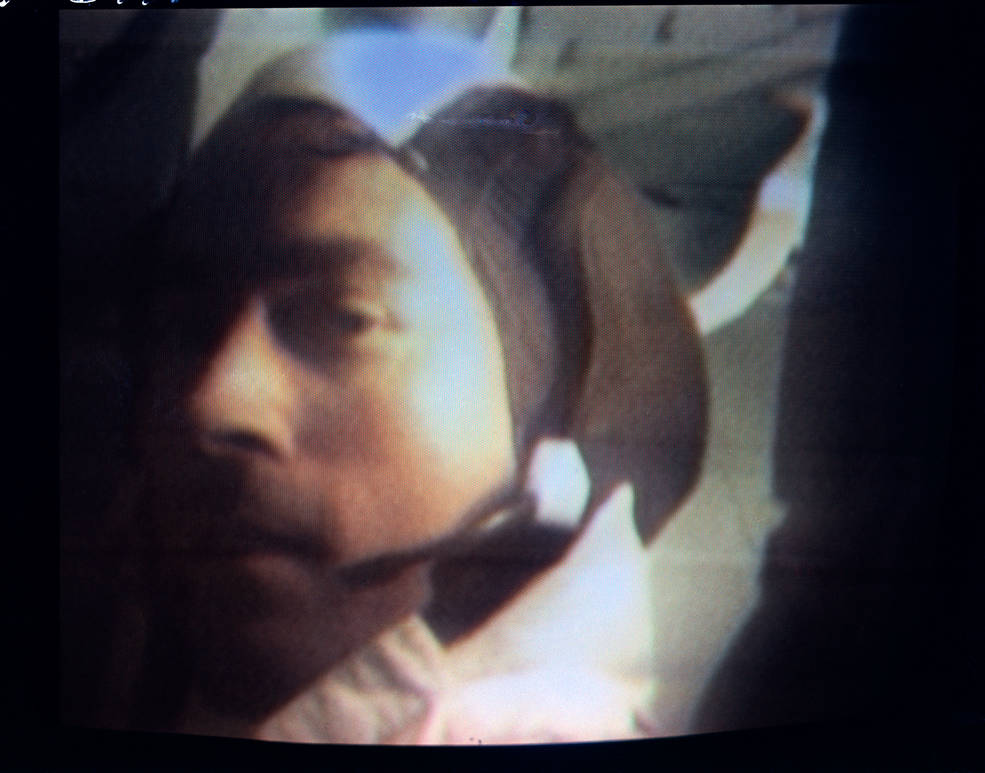 Color television views of (left to right) Stafford, Cernan, and Young, during one of the broadcasts on the first mission day.

Less than an hour after separating from the S-IVB, Apollo 10 fired its Service Propulsion System (SPS) engine for about three seconds to separate from the spent rocket stage. The S-IVB fired its remaining fuel to send it past the Moon three days later and on into solar orbit. The crew then treated television viewers to another color broadcast by showing them the home planet from about 25,000 miles away. The broadcast ended after about 13 minutes as the crew settled down for some housekeeping. And before their first sleep period in space, the crew treated viewers on the ground with another 24-minute TV transmission, first of the home planet and then some views of themselves in the cabin. Capcom McCandless commented, “It’s really great. The colors are fantastic.” After the transmission they finally took off the spacesuits they had been wearing since several hours before launch. After eating dinner, the next task for them was to place their spacecraft in the Passive Thermal Control (PTC) attitude, during which it rotated slowly about its longitudinal axis to even out the extreme temperatures in space, making three rotations every hour. For this reason, the attitude is often referred to as barbecue mode. 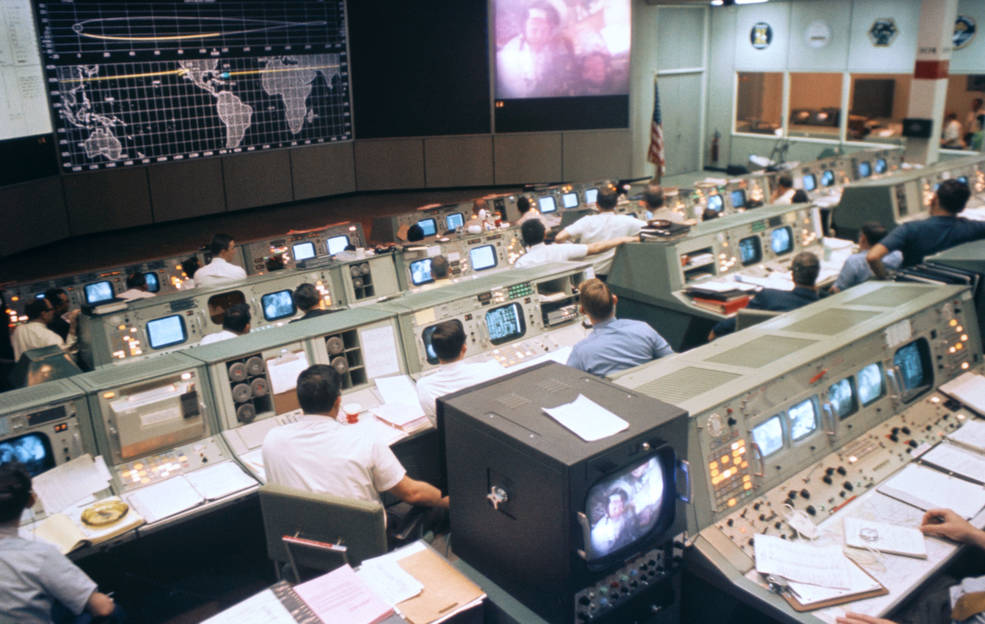 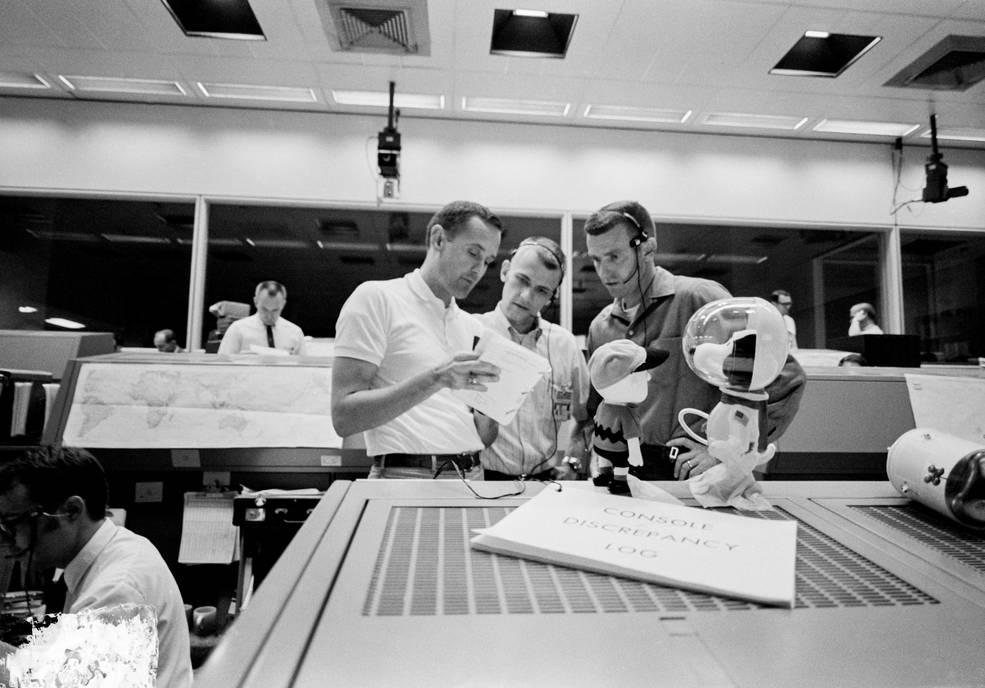 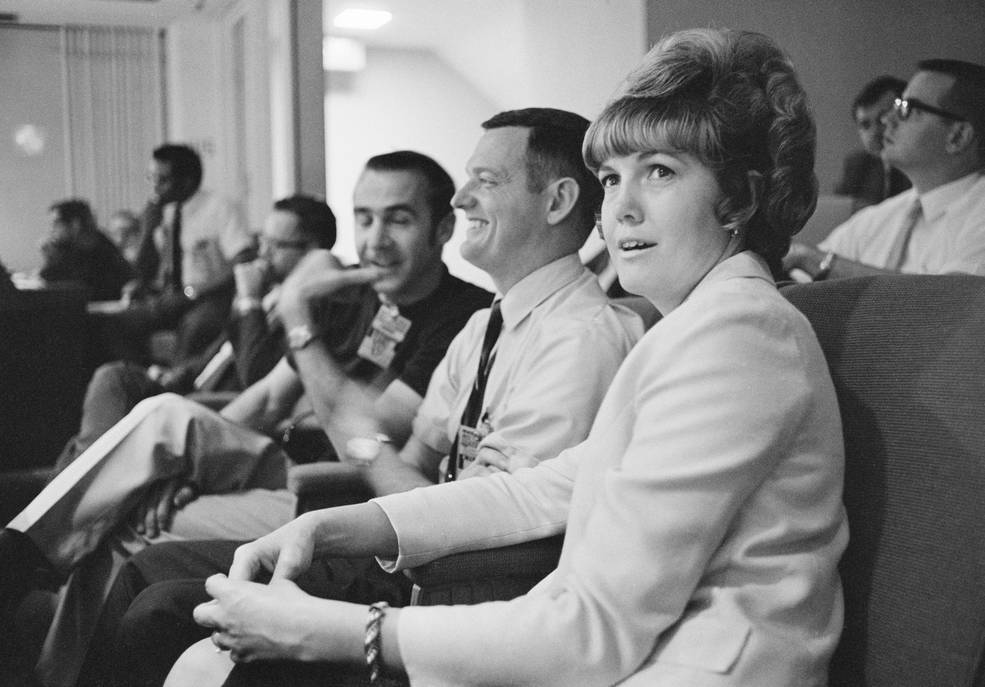 Left: View of Mission Control during one of the TV broadcasts from Apollo 10. Middle: Capcoms (left to right) Duke, McCandless, and Engle
conferring during the mission. Right: Barbara Cernan (right) in the Mission Control viewing room, accompanied by Flight Director Lunney.

For the next two days, the mission continued relatively event free. The crew conducted six more TV broadcasts showing the ground views of the ever-shrinking Earth and more interior shots of the crew. By some estimates, more than a billion people watched at least some of the Apollo 10 broadcasts. The crew completed the only mid-course correction needed, a seven-second firing of the SPS engine that adjusted the trajectory for the proper altitude above the Moon for the Lunar Orbit Insertion (LOI) burn. Along the way, the astronauts were able to sight the discarded S-IVB stage, about 4,000 miles away, travelling in a roughly parallel path that took it past the Moon and into solar orbit. About 62 hours after launch, they crossed into the Moon’s gravitational sphere of influence and their speed began to increase. At 72 hours 55 minutes and still about 9,000 miles from the Moon, Apollo 10 passed into the darkness of the lunar shadow. The only external light came from Earthshine, sunlight reflected from the Earth, and bright enough to illuminate their LM Snoopy. Less than three hours later, Apollo 10 passed behind the Moon and communications with Earth was cut off. The LOI burn, the firing of the SPS engine to put Apollo 10 into lunar orbit, would take place seven minutes later but behind the Moon, and only the three astronauts would know if the burn was successful until the spacecraft reappeared and communications with Earth was reestablished.

Read Stafford and Cernan’s recollections of the Apollo 10 mission in their oral histories with the JSC History Office.