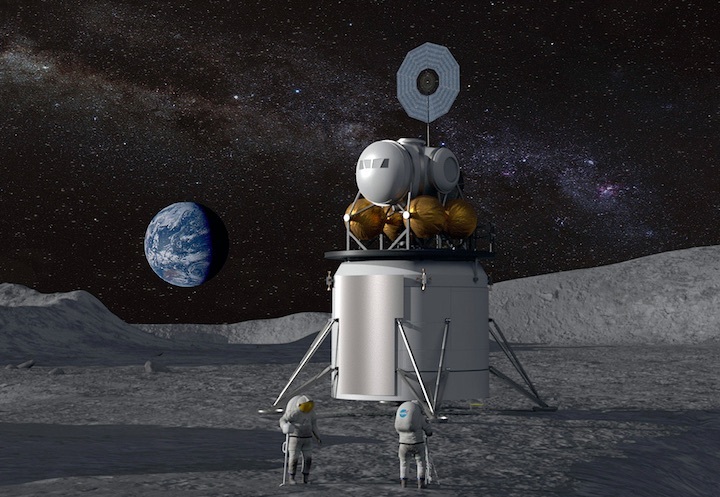 Artist's concept of a future moon landing carried out under NASA's newly-named Artemis program. The space agency is working to return men and send the first women to the lunar surface by 2024, as has been directed by the White House. (NASA)

Half a century after NASA sent men to the moon under project "Apollo," the space agency is now working to land men — and women — on the lunar surface as part of its "Artemis" program.

NASA Administrator Jim Bridenstine revealed the new moniker on Monday (May 13) during a call with reporters that was primarily focused on the budget for the newly-named moon program.

"It turns out that Apollo had a twin sister, Artemis. She happens to be the goddess of the moon," said Bridenstine, referring to Greek mythology. "Our astronaut office is very diverse and highly qualified. I think it is very beautiful that 50 years after Apollo, the Artemis program will carry the next man — and the first woman — to the moon."

The Artemis program, which was previously only referred to by its component names — including the Space Launch System heavy-lift rocket, Orion crew vehicle and Gateway lunar outpost — began when President Donald Trump signed Space Policy Directive 1 in 2017, directing NASA to return astronauts to the moon.

Two years later, in March (2019), Vice President Mike Pence further defined the program by announcing a five-year deadline for the first crewed lunar landing. The 2024 mission, he said, should land at the south pole with the "first woman and the next man on the moon."

On Monday, Trump amended his Fiscal Year 2020 budget request to account for the accelerated schedule and new mission objectives.

"As you know, the President has given our agency the bold charge to land the next man and the first woman on the lunar south pole by 2024 and now President Trump has extended his vote of confidence in our work with an amended budget request for physical year 2020," said Bridenstine in a video address to employees. "It includes $1.6 billion in additional funding."

To achieve the 2024 goal, NASA intends to scale back its plans for a crew-tended, multi-module Gateway to include only the basic parts needed to support an initial landing. Support for a long-term, sustainable lunar presence, as had been NASA's priority, have been deferred to 2028. 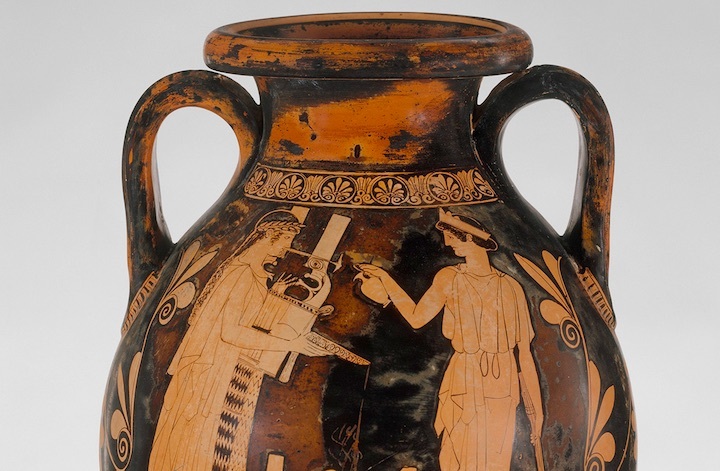 A mid-5th century B.C. vase depicting the Greek god Apollo (at left) with his twin sister Artemis. (Metropolitan Museum of Art)
In Greek mythology, Apollo and Artemis were the twin children of Zeus and Leto. In addition to being the goddess of the moon, Artemis was also the goddess of the hunt, with Orion her hunting companion.

The name "Apollo" was first proposed for the 1960s moon landing program by Abe Silverstein, NASA's then-director for spaceflight development. He chose the name because of its connection to Greek mythology and its "attractive connotations," per the space agency.

Before being assigned to the current moon landing program, NASA used Artemis to refer to a pair of lunar probes studying the moon's interactions with the sun. The ARTEMIS — or "Acceleration, Reconnection, Turbulence and Electrodynamics of the Moon's Interaction with the Sun" — spacecraft were reassigned from NASA's THEMIS mission in 2010.

Artemis was also selected by a team competing for NASA's Commercial Lunar Payload Services (CLPS) contract. The team, led by Draper, named their proposed lunar lander Artemis-7 in honor of the Greek goddess (the number 7 signified Draper's seventh lunar landing, having a heritage in Apollo).

The name has also been used for a European communications satellite (retired in 2017) and was the fictional title given to the first city on the moon in author Andy Weir's ("The Martian") 2017 science fiction novel "Artemis." There is also a small crater in Mare Imbrium, or the Sea of Showers, on the moon.

"I have a daughter who is 11 years old and I want her to be able to see herself in the same role as the next women [who] go to the moon see themselves in today," he said. "This is really a beautiful moment in American history and I am very proud to be a part of it."