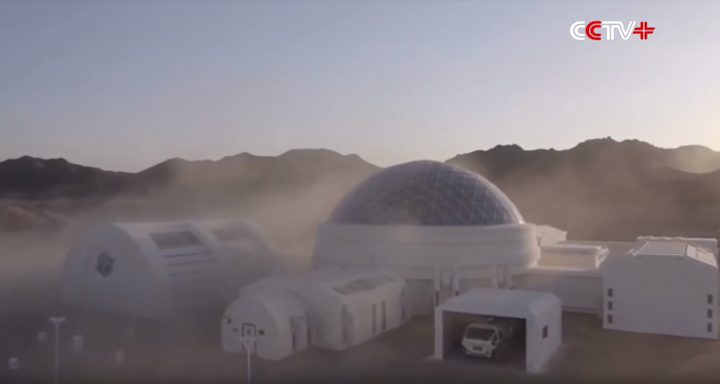 China's first Mars simulation base opened to the press on Friday in Gansu Province in the northwest of the country, providing a glimpse of the project mainly intended to popularise space among youth.

The base is located in the Gobi Desert, 40 kilometres away from the downtown area of Jinchang, a city in Gansu. The natural features, landscape and climate are being described as resembling Martian conditions.

The newly-built base has an extravehicular site and nine modules, including an airlock module, a general control module and a bio-module.

"[The base] has several sections. It can tell us how to survive in severe environment when we arrive in the Mars, including such questions as where we can stay, where we can do scientific experiments to serve the globe and which experiments are more valuable," said Tian Rusen, an expert on space and science outreach.

China’s first Mars simulation base opens to the press in northwest China.

The base will be turned into China's first cultural and tourist experience base for space and astronomical education, Mars-themed tourism, scientific research and film shooting, according to CCTV.

"It can give the kids a feeling that could have in the Mars, and make them learn that high technology can lead the society forward," said Tian.

Some level of criticism within the Chinese science community has been expressed over the base's location and focus on tourism possibilities over value as an analogue site.

The base is a part of the country's 'C Space Plan', a project of space education for Chinese teenagers, which was launched on Friday in Jinchang.

The plan will involve making a space science reality show, a space themed film, a documentary, cultural and creative space-derivative products, research and experience camps and more to promote space to the country's youngsters.

Such schemes are likely linked to the 'China space dream' derivative of Xi Jinping's 'China Dream' slogan, and seek to bolster support for the ruling Communist Party through the promotion of the country's achievements and ambitions in space.

Since 2016 China has held an annual 'Space Day' on April 24 to celebrate the country's achievements, with the date chosen to mark the anniversary of the launch of China's first satellite, Dondfanghong-1, in 1970.

China Focus: Exploring life on Mars in the Gobi desert

"Mars ain't the kind of place to raise your kids," as an Elton John hit goes.

However, a Mars simulation base in the middle of China's Gobi desert might be the perfect place to introduce young, budding astronauts to what life would be like on the red planet.

Surrounded by barren hills and red soil in northwest China's Gansu Province, "Mars Base One" allows visitors to explore a variety of space facilities and the rocky, martian-like landscape.

The white-colored base covers five sq km and features nine interconnected modules, including a control room, living quarters and a greenhouse where wheat and vegetables grow.

The base made international headlines when it started trial operation and welcomed more than 100 local students on a five-hour tour on April 17. Its distinctive landscape was described by Reuters as a close analog of Tatooine, the home planet of the "Star Wars" hero Luke Skywalker.

Since then, Mars Base One has received over 500 visitors, mainly teenagers, from across China who yearn to take a peek at the futuristic base before its official opening later this year.

"This place is so cool; more than what I've imagined. I hope I can land on Mars someday," middle school student Cai Yajuan said after visiting the base.

"Having experienced what life is like on Mars, I'm now more curious about outer space," said another student Li Yaqin, who called herself a big fan of sci-fi hits such as "The Wandering Earth" and "The Martian."

Li Tanqiu, deputy chief designer of China's astronaut system department and a consultant of the base, said the base combines science popularization with tourism, which will enable more people to experience the pleasure of space exploration.

Liu Chuan, operations manager of the base, said he has been woken up by phone calls about the base almost every morning after its unveiling. But he is more than glad to see that Chinese people have taken so much interest in space exploration.

"The base provides teenagers with an opportunity to learn about Mars. We hope to inspire more and more young people to participate in space exploration," Liu said.

He added that staff with the base are creating science courses and designing tour routes to better serve visitors in the future.

"I don't know who will be the first person to land on Mars, but it could be someone who has visited the base," he said.

Mars Base One is indicative of the growing popularity of space-themed tourism in China.

The area is known as one of the best replicas of Mars on Earth, with its natural features, landscape and climate similar to those on the red planet.

Hundreds of thousands of domestic and overseas tourists have flocked to the mega-telescope in the past three years and found themselves in awe of its enormous size and potential for breakthrough discoveries.

The local government has to cap the number of visitors to reduce the influence of human activities on the telescope's functions.

Lin Ke, a professor with Lanzhou University, said the public enthusiasm in China for the outer space arises from the country's great achievements in space exploration in recent years.

In January, China's Chang'e-4 probe touched down on the far side of the moon, becoming the world's first spacecraft soft-landing on the moon's uncharted side never visible from Earth.

The country has also mapped out a spate of ambitious space programs including launching a Mars probe around 2020 and having its own space station operational by 2022.

"China's achievements in aerospace are made possible by hard-working and dedicated Chinese researchers. But space exploration is more than just hard work. It's a lot of fun," Li Tanqiu said.

"Only when space exploration is fun can it appeal to teenagers, who represent the future of China's aerospace industry," he added.