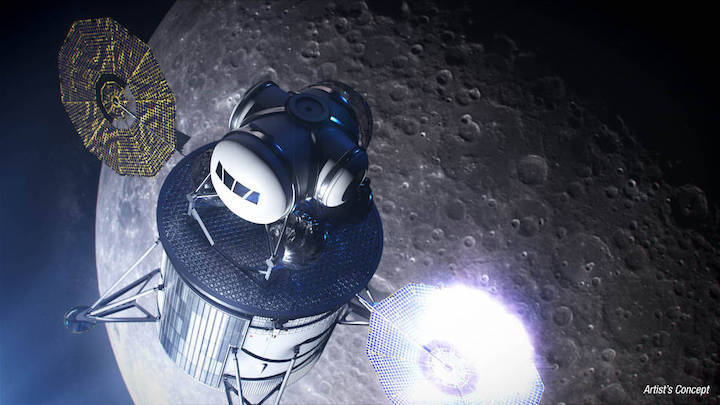 NASA has selected 11 companies to conduct studies and produce prototypes of human landers for its Artemis lunar exploration program. This effort will help put American astronauts — the first woman and next man — on the Moon’s south pole by 2024 and establish sustainable missions by 2028.

“To accelerate our return to the Moon, we are challenging our traditional ways of doing business. We will streamline everything from procurement to partnerships to hardware development and even operations,” said Marshall Smith, director for human lunar exploration programs at NASA Headquarters. “Our team is excited to get back to the Moon quickly as possible, and our public/private partnerships to study human landing systems are an important step in that process.”

Through Next Space Technologies for Exploration Partnerships (NextSTEP) Appendix E contracts, the selected companies will study and/or develop prototypes during the next six months that reduce schedule risk for the descent, transfer, and refueling elements of a potential human landing system.

NASA’s proposed plan is to transport astronauts in a human landing system that includes a transfer element for the journey from the lunar Gateway to low-lunar orbit, a descent element to carry them to the surface, and an ascent element to return to them to the Gateway. The agency also is looking at refueling capabilities to make these systems reusable.

The total award amount for all companies is $45.5 million. As NextSTEP is a public/private partnership program, companies are required to contribute at least 20% of the total project cost. This partnership will reduce costs to taxpayers and encourage early private investments in the lunar economy.

The awardees, from eight states across the country, are:

To expedite the work, NASA is invoking undefinitized contract actions, which allow the agency to authorize partners to start a portion of the work, while negotiations toward contract award continue in parallel.

NASA gave industry its first heads up in April, with the issuance of a pre-solicitation, of its intention to partner with American companies on the development of an integrated lander. The formal solicitation, to be issued this summer, will provide the requirements for a 2024 human landing, and leave it to U.S. industry to propose innovative concepts, hardware development and integration.

“This new approach doesn’t prescribe a specific design or number of elements for the human landing system,” Chavers said. “NASA needs the system to get our astronauts on the surface and return them home safely, and we’re leaving a lot of the specifics to our commercial partners.”

NASA is sending astronauts to the Moon and then on to Mars, in a measured and sustainable way. The direction from Space Policy Directive-1 builds on the hard work NASA is doing on its Space Launch System rocket and Orion spacecraft, agency efforts to enable commercial partners, its work with international partners, and what NASA learns from its current robotic missions at the Moon and Mars.