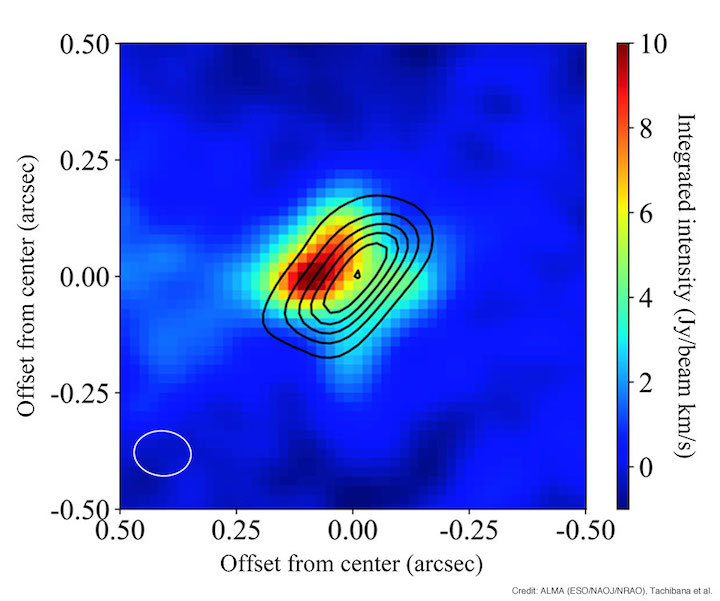 Researchers using ALMA data discovered an aluminum-bearing molecule for the first time around a young star. Aluminum rich inclusions found in meteorites are some of the oldest solid objects formed in the Solar System, but their formation process and stage is still poorly linked to star and planet formation. The discovery of aluminum oxide around a young star provides a crucial chance to study the early formation process of meteorites and planets like the Earth.

Young stars are surrounded by disks of gas. Some of the gas condenses into dust grains which then stick together to form larger objects, building up to form meteors, planetesimals, and eventually planets. Understanding the formation of these first solid objects is important for understanding everything which follows.

Shogo Tachibana, a professor at the University of Tokyo/Japan Aerospace Exploration Agency (JAXA), and his team analyzed the ALMA (Atacama Large Millimeter/submillimeter Array) data for Orion KL Source I, a young massive protostar, and found distinctive radio emissions from aluminum oxide (AlO) molecules. This is the first unambiguous detection of AlO around a young star.

“Aluminum oxide played a very important role in the formation of the oldest material in the Solar System,” says Tachibana “Our discovery will contribute to the understanding of material evolution in the early Solar System.”

Interestingly, the radio emissions from the AlO molecules are concentrated in the launching points of the outflows from the rotating disk around the protostar. In contrast, other molecules such as silicon monoxide (SiO) have been detected in a wider area in the outflow. Normally, the temperature is higher at the base of the outflows and lower in the downstream gas. “Non-detection of gas-phase AlO downstream indicates that the molecules have condensed into solid dust particles in the colder regions,” explains Tachibana. “Molecules can emit their distinctive radio signals in gas-phase, but not in solid-phase.”

ALMA’s detection of AlO in the hot base of the outflow suggests that the molecules are formed in hot regions close to the protostar. Once moved to colder regions, AlO would be captured in dust particles which can become aluminum-rich dust, like the oldest solid in the Solar System, and further the building blocks for planets.

The team will now observe other protostars looking for AlO. Combining the new results with data from meteorites and sample return missions like JAXA’s Hayabusa2 will provide important insights into the formation and evolution of our Solar System and other planetary systems.

These observation results were published as Tachibana et al. “Spatial distribution of AlO in a high mass protostar candidate Orion Source I” in the Astrophysical Journal Letters on April 24, 2019.