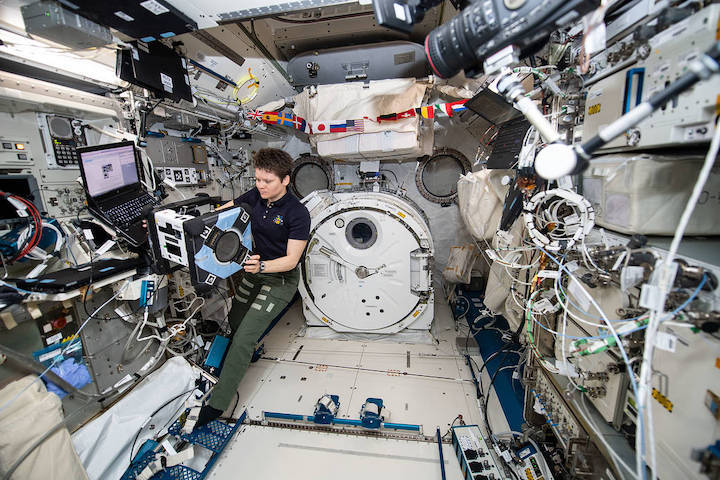 NASA astronaut Anne McClain performs the first series of tests of an Astrobee robot, Bumble, during a hardware checkout. To her right is the docking station that was installed in the Kibo module on the International Space Station on Feb. 15. Bumble, and another robot named Honey, launched to the space station on Apr. 17, aboard Northrop Grumman’s eleventh commercial resupply services mission from NASA’s Wallops Flight Facility in Virginia. When needed the robots will be able to return to their docking station on their own and recharge their battery power.

Astrobee is a free-flying robot system that will provide a research platform for the orbiting laboratory. The system includes three robots as well as a docking station for recharging. Robots will play a significant part in the agency’s mission to return to the Moon as well as other deep space missions. Astrobee will be used to test how robots can assist crew and perform caretaking duties on spacecraft. This will increase astronaut productivity and help maintain spacecraft when astronauts are not present near the Moon, Mars or other deep-space outposts.

Bumble, the first Astrobee robot to power up in space, blinks while connected to its docking station in the Kibo module of the International Space Station. On April 30, NASA astronaut Anne McClain unpacked Bumble and worked with Astrobee’s team at NASA’s Ames Research Center in California’s Silicon Valley to do an initial series of tests to verify that all of the robot’s subsystems — avionics, cameras, propulsion and docking for power and data transfer — were working properly before Bumble really takes flight later this spring.