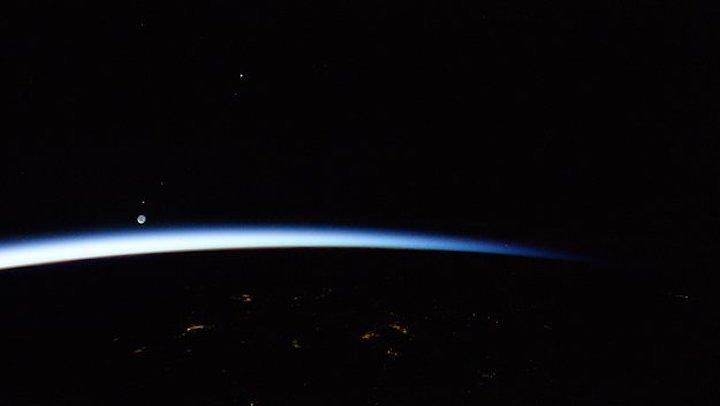 The Moon, Mars and Venus rising over Earth's horizon

One has a thick poisonous atmosphere, one has hardly any atmosphere at all, and one is just right for life to flourish – but it wasn’t always that way. The atmospheres of our two neighbours Venus and Mars can teach us a lot about the past and future scenarios for our own planet.

Rewind 4.6 billion years from the present day to the planetary construction yard, and we see that all the planets share a common history: they were all born from the same swirling cloud of gas and dust, with the newborn Sun ignited at the centre. Slowly but surely, with the help of gravity, dust accumulated into boulders, eventually snowballing into planet-sized entities.

Rocky material could withstand the heat closest to the Sun, while gassy, icy material could only survive further away, giving rise to the innermost terrestrial planets and the outermost gas and ice giants, respectively. The leftovers made asteroids and comets.

The atmospheres of the rocky planets were formed as part of the very energetic building process, mostly by outgassing as they cooled down, with some small contributions from volcanic eruptions and minor delivery of water, gases and other ingredients by comets and asteroids. Over time the atmospheres underwent a strong evolution thanks to an intricate combination of factors that ultimately led to the current status, with Earth being the only known planet to support life, and the only one with liquid water on its surface today.

We know from space missions such as ESA’s Venus Express, which observed Venus from orbit between 2006 and 2014, and Mars Express, investigating the Red Planet since 2003, that liquid water once flowed on our sister planets, too. While the water on Venus has long since boiled away, on Mars it is either buried underground or locked up in ice caps. Intimately linked to the story of water – and ultimately to the big question of whether life could have arisen beyond Earth – is the state of a planet’s atmosphere. And connected to that, the interplay and exchange of material between the atmosphere, oceans and the planet’s rocky interior.

Back at our newly formed planets, from a ball of molten rock with a mantle surrounding a dense core, they stated to cool down. Earth, Venus and Mars all experienced outgassing activity in these early days, which formed the first young, hot and dense atmospheres. As these atmospheres also cooled, the first oceans rained down from the skies.

At some stage, though, the characteristics of the geological activity of the three planets diverged. Earth’s solid lid cracked into plates, in some places diving below another plate in subduction zones, and in other places colliding to create vast mountain ranges or pulling apart to create giant rifts or new crust. Earth’s tectonic plates are still moving today, giving rise to volcanic eruptions or earthquakes at their boundaries.

Venus, which is only slightly smaller than Earth, may still have volcanic activity today, and its surface seems to have been resurfaced with lavas as recently as half a billion years ago. Today it has no discernable plate tectonics system; its volcanoes were likely powered by thermal plumes rising through the mantle – created in a process that can be likened to a ‘lava lamp’ but on a gigantic scale.

Mars from horizon to horizon

Mars, being a lot smaller, cooled off more quickly than Earth and Venus, and when its volcanoes became extinct it lost a key means of replenishing its atmosphere. But it still boasts the largest volcano in the entire Solar System, the 25 kilometre high Olympus Mons, likely too the result of continuous vertical building of the crust from plumes rising from below. Even though there is evidence for tectonic activity within the last 10 million years, and even the occasional marsquake in present times, the planet is not believed to have an Earth-like tectonics system either.

It is not just global plate tectonics alone that make Earth special, but the unique combination with oceans. Today our oceans, which cover about two-thirds of Earth’s surface, absorb and store much of our planet’s heat, transporting it along currents around the globe. As a tectonic plate is dragged down into the mantle, it warms up and releases water and gases trapped in the rocks, which in turn percolate through hydrothermal vents on the ocean floor.

Extremely hardy lifeforms have been found in such environments at the bottom of Earth’s oceans, providing clues as to how early life may have begun, and giving scientists pointers on where to look elsewhere in the Solar System: Jupiter’s moon Europa, or Saturn’s icy moon Enceladus for example, which conceal oceans of liquid water beneath their icy crusts, with evidence from space missions like Cassini suggesting hydrothermal activity may be present.

Moreover, plate tectonics helps to modulate our atmosphere, regulating the amount of carbon dioxide on our planet over long timescales. When atmospheric carbon dioxide combines with water, carbonic acid is formed, which in turn dissolves rocks. Rain brings the carbonic acid and calcium to the oceans – carbon dioxide is also dissolved directly in oceans – where it is cycled back into the ocean floor. For almost half of Earth’s history the atmosphere contained very little oxygen. Oceanic cynobacteria were the first to use the Sun’s energy to convert carbon dioxide into oxygen, a turning point in providing the atmosphere that much further down the line allowed complex life to flourish. Without the planetary recycling and regulation between the mantle, oceans and atmosphere, Earth may have ended up more like Venus.

Venus is sometimes referred to as Earth’s evil twin on account of it being almost the same size but plagued with a thick noxious atmosphere and a sweltering 470ºC surface. Its high pressure and temperature is hot enough to melt lead – and destroy the spacecraft that dare to land on it. Thanks to its dense atmosphere, it is even hotter than planet Mercury, which orbits closer to the Sun. Its dramatic deviation from an Earth-like environment is often used as an example of what happens in a runaway greenhouse effect. The main source of heat in the Solar System is the Sun’s energy, which warms a planet’s surface up, and then the planet radiates energy back into space. An atmosphere traps some of the outgoing energy, retaining heat – the so-called greenhouse effect. It is a natural phenomenon that helps regulate a planet’s temperature. If it weren’t for greenhouse gases like water vapour, carbon dioxide, methane and ozone, Earth’s surface temperature would be about 30 degrees cooler than its present +15ºC average.

Over the past centuries, humans have altered this natural balance on Earth, strengthening the greenhouse effect since the dawn of industrial activity by contributing additional carbon dioxide along with nitrogen oxides, sulphates and other trace gases and dust and smoke particles into the air. The long-term effects on our planet include global warming, acid rain and the depletion of the ozone layer. The consequences of a warming climate are far-reaching, potentially affecting freshwater resources, global food production and sea level, and triggering an increase in extreme-weather events.

There is no human activity on Venus, but studying its atmosphere provides a natural laboratory to better understand a runaway greenhouse effect. At some point in its history, Venus began trapping too much heat. It was once thought to host oceans like Earth, but the added heat turned water into steam, and in turn, additional water vapour in the atmosphere trapped more and more heat until entire oceans completely evaporated. Venus Express even showed that water vapour is still escapingfrom Venus’ atmosphere and into space today.

The observation adds to the discussion what might happen if large quantities of sulphur dioxide are injected into Earth’s atmosphere – a proposal made for how to mitigate the effects of the changing climate on Earth. The concept was demonstrated from the 1991 volcanic eruption of Mount Pinatubo in the Philippines, when sulphur dioxide ejected from the eruption created small droplets of concentrated sulphuric acid – like those found in Venus’ clouds – at about 20 km altitude. This generated a haze layer and cooled our planet globally by about 0.5ºC for several years. Because this haze reflects heat it has been proposed that one way to reduce global temperatures would be to inject artificially large quantities of sulphur dioxide into our atmosphere. However, the natural effects of Mt Pinatubo only offered a temporary cooling effect. Studying the enormous layer of sulphuric acid cloud droplets at Venus offers a natural way to study the longer term effects; an initially protective haze at higher altitude would eventually be converted back into gaseous sulphuric acid, which is transparent and allows all the Sun’s rays through. Not to mention the side-effect of acid rain, which on Earth can cause harmful effects on soils, plant life and water.