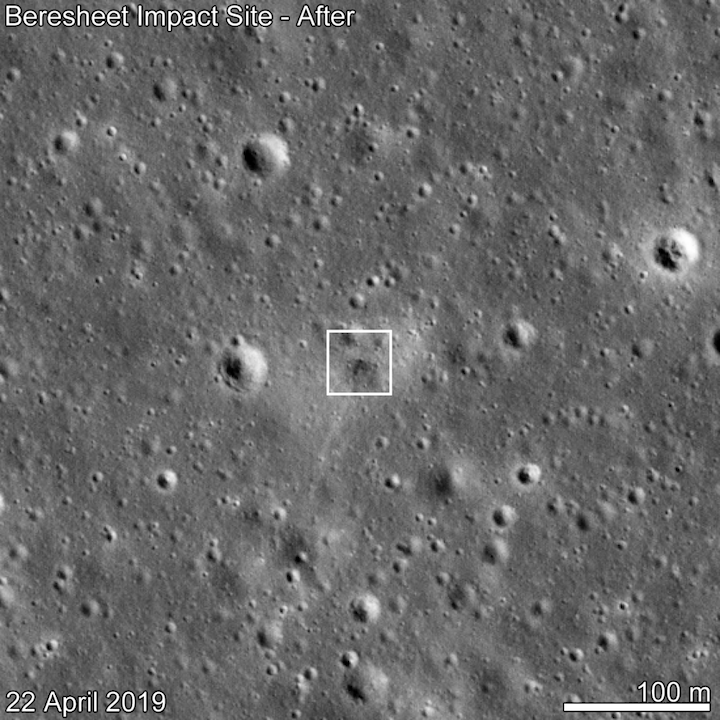 Beresheet impact site as seen by LROC 11 days after the attempted landing. Date in lower left indicates when the image was taken.
Credits: NASA/GSFC/Arizona State University

The photo above shows the landing site of the Israeli Beresheet spacecraft on a region of the Moon called Sea of Serenity, or Mare Serenitatis in Latin. On April 11, 2019,

SpaceIL, a non-profit organization, attempted to land its spacecraft in this ancient volcanic field on the nearside of the Moon. After a smooth initial descent, Beresheet made a hard landing on the surface.

As soon as its orbit placed NASA’s Lunar Reconnaissance Orbiter (LRO) over the landing site on April 22, 2019, LRO imaged Beresheet’s impact site. The LRO Camera (LROC) consists of three imagers: a seven-color Wide Angle Camera (WAC) and two black-and-white Narrow Angle Cameras (NAC) mounted on the LRO, which has been studying the Moon from orbit for a decade. NAC captured the Beresheet impact photo. 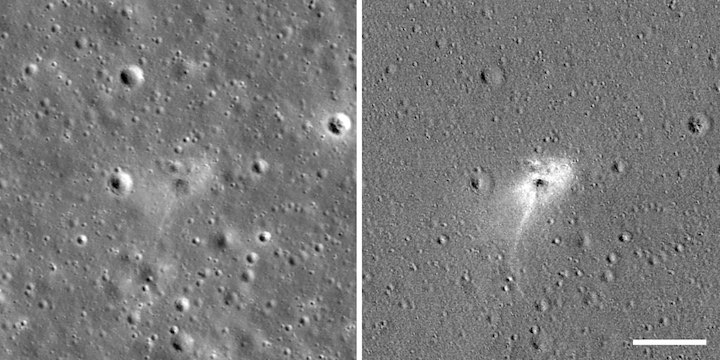 Left: Beresheet impact site. Right: An image processed to highlight changes near the landing site among photos taken before and after the landing, revealing a white impact halo. Other craters are visible in the right image because there is a slight change in lighting conditions among the before and after images. Scale bar is 100 meters. North is up. Both panels are 490 meters wide.
Credits: NASA/GSFC/Arizona State University

LROC took this image from 56 miles (90 kilometers) above the surface. The cameras captured a dark smudge, about 10 meters wide, that indicates the point of impact. The dark tone suggests a surface roughened by the hard landing, which is less reflective than a clean, smooth surface.

From so far away, LROC could not detect whether Beresheet formed a surface crater upon impact. It’s possible the crater is just too small to show up in photos. Another possibility is that Beresheet formed a small indent instead of a crater, given its low angle of approach (around 8.4 degrees relative to the surface), light mass (compared to a dense meteoroid of the same size), and low velocity (again, relative to a meteoroid of the same size; Beresheet’s speed was still faster than most speeding bullets).

The light halo around the smudge could have formed from gas associated with the impact or from fine soil particles blown outward during Beresheet’s descent, which smoothed out the soil around the landing site, making it highly reflective.

There are many clues that we’re actually looking at a man-made crater instead of a meteoroid-caused one. This is an important consideration, since the Moon, having no atmosphere, is constantly bombarded by space rocks that leave craters.

Most importantly, we knew the coordinates of the landing site within a few miles thanks to radio tracking of Beresheet, and we have 11 “before” images of the area, spanning a decade, and three “after” images. In all of these images, including one taken 16 days before the landing, we saw only one new feature of the size Beresheet would have created.

Existing mathematical models helped us estimate the size and shape of the crater that would have formed if an object of Beresheet’s mass and velocity struck the surface. We also referenced craters created by similar-size spacecraft (GRAIL, LADEE, Ranger) that have struck the Moon at about the same speed, and we saw that the white tail stretching from the landing halo towards the south is a shape that’s consistent with Beresheet’s southward descent trajectory and angle of approach.

Before and after comparison of the landing site. Date in lower left indicates when the image was taken. It appears the spacecraft landed from the north on the rim of a small crater, about a few meters wide, leaving a dark "smudge" on Mare Serenitatis that’s elongated towards the south.
Credits: NASA/GSFC/Arizona State University

For the before image above, we used a photo from December 16, 2016.  This is because the lighting conditions that day, based on the angle at which the Sun would have illuminated the Moon at that particular time in its orbit, were the most similar to the April 22 image. Because LRO was beyond the horizon during Beresheet’s descent and landing, it couldn’t capture a photo until its orbit brought it nearby 11 days later. LRO passes over the lunar poles with each revolution. Meanwhile, the Moon rotates on its axis below the spacecraft, allowing LRO to pass over every part of the Moon twice a month (once during lunar night and once during lunar day). LROC may take more images of the landing site when it passes the same area again on May 19.

Efforts are ongoing to bounce laser pulses from the Lunar Orbiter Laser Altimeter, also on board LRO, to measure the return from the Laser Retroreflector Array of small corner cube mirrors. This instrument was provided by NASA’s Goddard Space Flight Center and was installed on the top deck of the Beresheet spacecraft. Attempts are ongoing to examine if the retroreflector may have survived the impact.