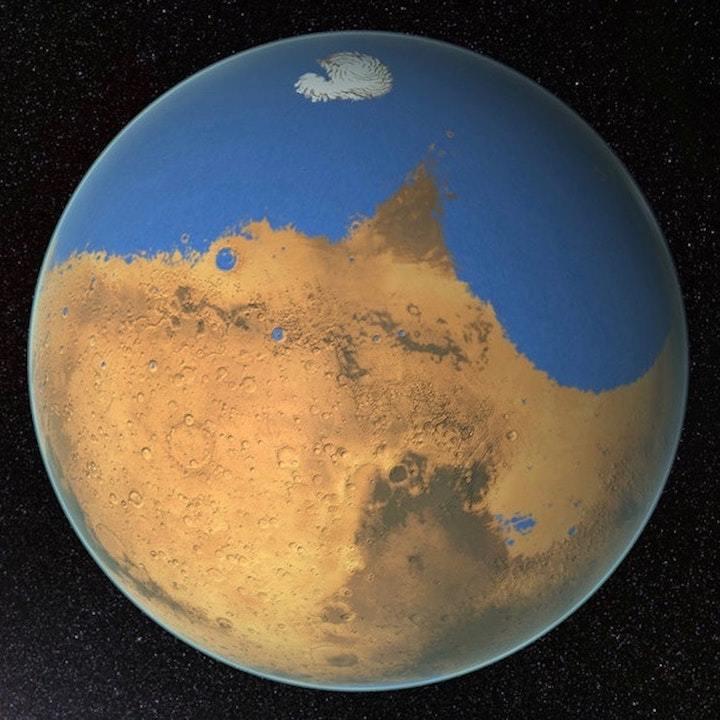 Water vapour in the Martian atmosphere continues to escape into space, prolonging the process by which, planetary scientists suspect, the planet lost the mighty ocean and river systems that flowed across it billions of years ago.

The current water vapour loss, a team of researchers led by Dmitry Shaposhnikov of the Moscow Institute of Physics and Technology, Russia, has discovered, happens through a mechanism unknown in the Earth’s meteorological system.

The findings are contained in a paper published in the journal, Geophysical Research Letters.

The Martian atmosphere extends approximately 160 kilometres up from the surface. The middle of this gas envelope is extremely cold – easily cold enough, in fact, to freeze rising water vapour and prevent its escape.

Yet escape some of it does, reaching the upper layers, where ultraviolent radiation from the sun splits it into hydrogen and hydroxyl radicals, with the former drifting irrevocably off into space.

The portion of vapour that does not reach the upper atmosphere – its trajectory stopped by the cold middle layer – floats towards the planet’s north pole, where it cools and descends once again to the surface.

Using computer analyses, Shaposhnikov and colleagues have now discovered how the vapour performs its Houdini act, in the process revealing an entirely new water cycle.

The key, the researchers found, was the elliptical orbit of Mars, which takes the equivalent of roughly two Earth years.

During the Martian southern hemisphere summer, the planet is about 42 million kilometres closer to the sun than during the same season in the north. This means that the southern summer is considerably warmer.

And that, the researchers suggest, opens up a limited, but sufficient, window.

“When it is summer in the southern hemisphere, at certain times of day water vapour can rise locally with warmer air masses and reach the upper atmosphere,” explains co-author Paul Hartogh from the Max Planck Institute for Solar System Research, in Germany.

In effect, the atmosphere, temporarily, functions like a pump, causing the ice-cold middle layer to become permeable. The effect happens only during the southern summer, only twice a day, and only in very specific locations.

The researchers also found that the massive dust storms which blanket Mars every half-decade or so fuel the loss process by warming the atmosphere and accelerating the upwards movement of the water molecules.

“Apparently, the Martian atmosphere is more permeable to water vapour than that of the Earth,” Hartogh concludes. “The new seasonal water cycle that has been found contributes massively to Mars’ continuing loss of water.”